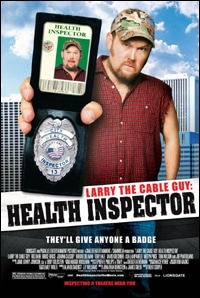 A couple months ago, I tried very, very hard to get Larry the Cable Guy to come on The Sound of Young America to talk with David Cross. Cross was good to go, Larry, not so much.

Reviews for his new film, “Larry the Cable Guy: Health Inspector” are starting to come in, and I thought I’d start a post here to chronicle them, starting with the New York Times review:

“Unpleasant, uncouth and painfully unfunny, “Larry the Cable Guy: Health Inspector” attempts lowbrow humor with neither the wit of the Farrelly brothers nor the raunchy inventiveness of Keenen Ivory Wayans. Aiming at audiences for whom no comedy is complete without lower-intestinal distress and projectile vomiting, the movie pursues its unsanitary goals with a relentlessness that makes “Dumb and Dumber” seem the epitome of sophistication. Prepare to be overcome with an irresistible urge to wash your hands afterward. “

The Times to hoity-toity for you? Here’s the Post’s review:

Dumped into theaters without critics’ screenings after it was abandoned by its
original distributor, this is a virtually unwatchable and laugh-free vehicle for
the stand-up redneck comedian Daniel Whitney , who calls himself Larry the Cable
Guy.

The Onion AV Club weighs in:

It’d be tempting to call Larry the Ernest of his generation, but that’d be a grave insult to Jim Varney’s enduring legacy. Compared to Larry—a grating, baby-faced butterball with all the magnetism and charisma of an Applebee’s night manager—Varney was the second coming of Jimmy Stewart