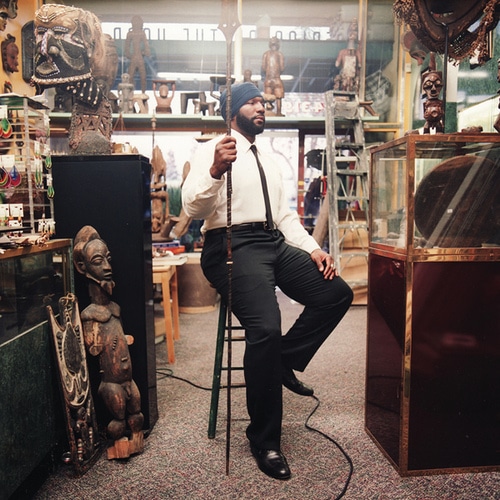 Shafiq Husayn is 1/3 of the Sa-Ra Creative Partners. Earlier this year Sa-Ra released Nuclear Evolution: The Age Of Love to much critical acclaim. Over the years Husayn has worked with Afrika Bambatta, Erykah Badu, Jill Scott, Jurassic 5 and many more. He was also a member of Ice T’s Rhyme Syndicate. On October 6th Plug Research will release Husayn’s Shafiq En’A-Free-ka. There are more than 30 contributors on the record including Bilal, Count Bass D, Fatima, and Sonny Coates. The end result is the work of an artist at the top of his game. Husayn speaks about democratic creativity, balance, and being the best person you can be.

Chris Bowman: It’s not often I use the term bangin’ but Shafiq En’ A-Free-Ka is exactly that! The U.N. Plan? Bangin’! Aside from the traditional African rhythms and other international influences, your music has a fairly heavy electronic influence to it. Who or what inspired you along the way to incorporate the electronic aspect?

Shafiq Husayn: Um. Basically just being a fan of music, a student of music. I’m gonna have to first go to a lot of those electronic records like the Dick Hyman/Moog series, Raymond Scott, Bob Moog. As far as actually incorporating it on wax, I would have to say Stevie Wonder, Sly Stone, Kraftwerk, and Afrika Bambaataa.

For more from Shafiq Husayn click on Read More

CB: En’A-Free-Ka has quite a few contributors/collaborators, some known and some lesser known. Newcomers Fatima and Sonny Coates are two that come to mind. How does the new talent come across your radar, do you seek it out is it a more organic process than that?

SH: Yeah, it’s more of an organic process, usually through some type of formal introduction. The first day I met Fatima was the first day I recorded “Lil Girl”. That was very organic. It wasn’t premeditated. I had no idea what she actually did when she came to the house.

CB: So you had never even heard her before?

SH: Never heard of her, ever.

CB: I don’t want to call it luck, because there’s a lot of skill involved, but that’s a nice end result.

CB: There’s often a lot going on in any given track. Figuring out what works and what doesn’t is a part of your art. How do you begin to map out a track?

SH: It usually starts with skeletons, a lot of preproduction. Maybe some tracks that I just had sitting around. I have a lot of concepts also, I also write at the same time independently from actually making music. Take “Evil Man”. That was actually written two years ago — the lyrics. Then the song, the actual music didn’t come until during the process.

CB: What was it written for? Just for your own benefit or is it something you do on the side, like you say?

SH: Yeah, with that particular song, I was in a coffee shop over by the beach with one of my children’s mothers. The people in there were kind of nasty. You know, very shrewd. They didn’t look like they were too happy to be there. But still, he was in the customer service business, so, you gotta serve the customer. But he was being nasty about it. So in my mind instead of sayin’ eff off, you know, it’s like evil man, fly away. Stop operating on the lower self and, you know, raise up.

CB: You touch on a lot of subject matter on the record. No Moor plays like a bit of a history lesson, while All Dead sounds like a warning. But while the messages are often serious, there is also a lightheartedness to it. Is this something you did consciously?

SH: Yes. The blend. Sometimes if the music is too dark you’ll notice people usually think that they have to put dark songs behind dark music. But actually it’s a balance. You should do the opposite. Sometimes like you said, a lighthearted song, you don’t want the message to come off as happy then you’ll probably use the medium, use the music as a little bit more textured or dangerous.

CB: You’ve stated that, “Hip hop mastered the beat, but they didn’t do nothing with the changes.” What did you mean by that?

SH: Well actually, that was a quote from Quincy Jones. What he said was what hip hop did was master the beat. Solidify the beat, the groove, you know, with all the drum chopping and programming being that hip hop is heavily drum influenced. But he said that the minute somebody comes with change and starts dealing with arrangements and true change, he said they will be the dudes that will pretty much spearhead the next movement of music.

CB: Sa-Ra released a record at the beginning of the summer and now you have released a solo record. Where do you find the time to make all of this music?

SH: That’s the- that’s it. Every day there’s something being made. We have stuff from catalogues just sitting on the hard drive. Years ago we would tell people that Sa-Ra had in excess of 200 to 300 songs that we’d never released. So we had all this content that would just sit up in the hard drive. Most of the projects that you hear from Sa-Ra collectively and as individuals — Taz Arnold, Om’Mas Keith and myself — you’ll probably hear stuff from those vaults or in the process of making tracks, a combination of both.

CB: So the stuff sitting on the hard drives are they seeds or are they complete ideas?

SH: A combination of both. Some of them are a little more developed than others. Some are finished. We have a whole album called The Black Fuzz album that’s completely done. That was an album that we actually recorded for the music contract. We were going to release it on Good Music.

CB: Are there plans to release it?

SH: Yes. We’re working on some distribution for it now.

CB: Operating for the time being as a solo artist allows you to embrace a single-minded vision, the clarity of which is evident in En’A-Free-Kah. Sa-Ra sounds just as clear but there are three minds at work. I imagine sometimes you must love an idea that may not make the cut. How do you (as Sa-Ra) approach compromise?

SH: We don’t look at it as us as individuals but for the betterment of the collective. Sometimes when you hear a song it may have started with the inception of lyrics. A good example, Om’Mas might bring in something that’s already done pretty much. Then I would say the filtering system is Taz and myself just putting our ears on it. That may be one process. Or Taz might have the beat of a song and say, “What do you guys think? It might need an extra bassline.” And I might say, “Well, let me put some strings on it.” It’s very democratic. As far as my solo project, obviously, I had a little bit more freedom and autonomy in terms of decision-making as far as songs and the process. I mean, I would still play them music as I was going but as far as the actual Sa-Ra process it was probably a little bit different. And the artists that I worked with it was pretty much the same thing too. They probably wouldn’t even hear the song until after. Maybe, like, a week or so. Some haven’t even heard the album yet.

CB: This sounds like the kind of album that would sound great with a full band. Any plans to tour the record?

SH: Yes. I’m putting a band together right now, The Free-Ka band. We’ll probably head out towards the end of the year. Sa-Ra has a European tour that we’re about to do. And Om’Mas has a solo album coming out too and it’s on Plug Research so him and I will probably do some spot dates together too.

CB: Part of what we do at maximumfun.org is draw attention to things in arts & culture, in this case music. What are some of your current fixations that you wish more people were aware of? Music or otherwise.

SH: Outside of music I wish people would be a little more conscious of nationality. Nationality is the order of the day. Dealing with status and how one operates in public and in private. I would tell people to honor they teachers and study they lessons, creating cultures of they forefathers. Each nation that has violated those principles has always suffered slavery. This is not just with one particular group of people, the whole world. And know that we’re one.

CB: And I guess that’s kind of the message on The U.N. Plan, right?

SH: October 6th. Plug Research. Shafiq En’A-Free-Ka. Go out and support that. International community on alert, this is a message to the world community. Love, truth, peace, freedom, and justice.