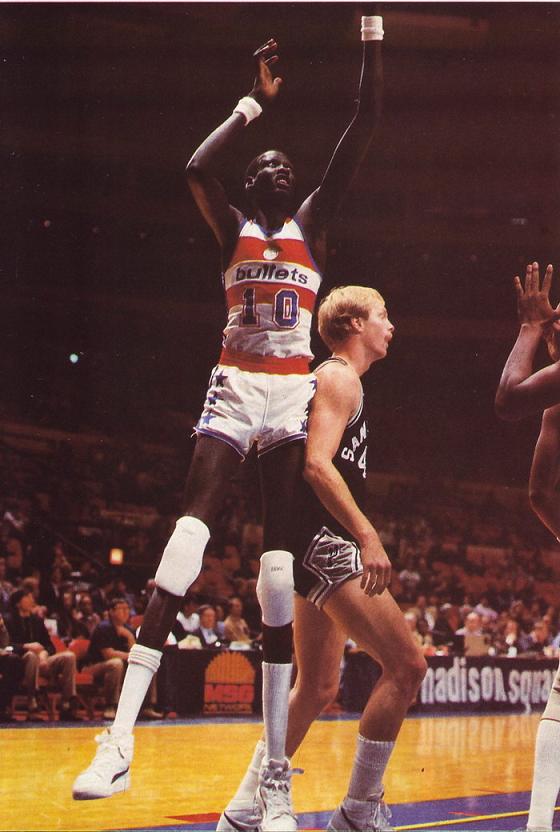 One of our time’s greatest New Sincericists. A man who dedicated all of the power he had to improving the lives of the impoverished natives of his homeland, the Sudan. A Real American (and African) Hero. We were lucky to have been witness to his great life.

Bol’s first stint with the Golden State Warriors was in a prime sports-following time of my life – I was 9 and 10 years old. His unusual style and amazing physique (and the rumors that he’d killed a lion) made him my favorite Warrior. When my friend Peter’s mom met and took a picture with him, the deal was sealed.

During Bol’s second stint with the Warriors, his final NBA season, I listened on the radio to one of the greatest nights of his career. This is how Wikipedia described it (I’m happy it actually happened, that I didn’t imagine it):

On a memorable night in the middle of November, Bol finally made his home debut, coming off of the bench to play 29 minutes against the Minnesota Timberwolves. He intimidated and blocked his usual shots and grabbed his usual rebounds. That night, however, served as a “blast from the past” as Bol was back to shooting three pointers like he did in the late-1980s. In that game, Bol connected on all three of the three pointers that he took (each was shot several steps beyond the three point line). The crowd, in disbelief, cheered louder and louder with each shot he took.

I was cheering at home, with my desk radio tuned in to KNBR 68, THE Sports Leader. I’ll be thinking fondly of Manute today.