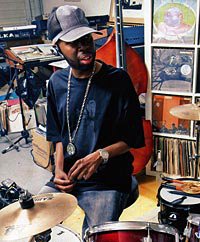 If you listen to the show, you heard me offer a brief memorial note for the late James Yancey, aka Jay Dee, aka Jay Dilla upon his passing. He was one of the greatest hip-hop producers ever, a revolutionary in the field. This article in the Detroit Free Press details his struggles with a rare blood disease, and later with lupus, which eventually claimed his life. His friends from the hip-hop world supported him in his last days, and his mother took care of him to the end, massaging his fingers when they swelled painfully from beatmaking in his hospital bed.

You can listen to NPR’s rememberance of him here.

While he did have health insurance, his medical expenses were huge, and they’ve fallen on his mother. Friends from the hip-hop community are helping, but if you’d like to help, you can make payment to:

Donations can be mailed to:

Bank Wires can be sent to: