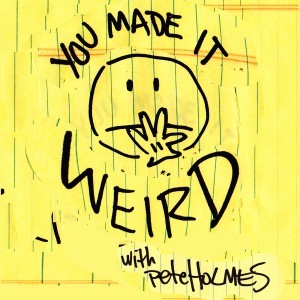 You’ve surely heard the name Pete Holmes resonating through the halls of alternative and/or podcast-y comedy lately. The words themselves could, by their broad pan-American nature, gain only the loosest purchase on anyone’s memory — far less than the evangelical fervor with which some speak them. Even if that piques your curiosity, casual investigation reveals only one more head in the endless perp walk of white, early-thirties, college improv-bred, sitcom-writing Los Angeles standup comics by way of New York. Yet everyone, as another noted comedy podcaster I recently interviewed put it, seems to be boarding the Pete Holmes bus.

Since this podcaster said that in response to my own salvo of Pete Holmes-related evangelization, perhaps I can offer some explanation. To truly “get” Pete Holmes, I submit that you must see Pete Holmes, like I did at a live Risk! taping. In the aftermath of his punchlines, watch the man twist his open, wholesome features — his name made flesh — into those of a lower-tier Midwestern politician on the brink of a flop sweat, the pressure from a desperate tap just inches too far down into his well of theatrical affability forcing open the stress fractures that will hasten his undoing. A subtle element of Holmes’ performance, yet a harrowing one; it would surprise me if even he fully understands how or why he pulls it off.

Then again, as his podcast You Made it Weird [RSS] [iTunes] reveals, I may vastly underestimate his capacity for (or compulsion toward) self-scrutiny. The show’s simple format drops Holmes into one-on-one conversations with friends, colleagues, and friend-colleagues, like a WTF without the confrontation. The resemblance between the two podcasts actually runs deep enough so as to get tough to explain; suffice it to say that, when Holmes brings Marc Maron on [MP3], the resulting episode could have fit just as well into one show’s feed as the other’s.

I want to say that You Made it Weird has more of a defined premise than does WTF, and I feel like I’ve even heard Holmes lay out that premise a few times, but far be it from me to remember it. Holmes’ interviews, which usually happen on the back of such a pre-existing rapport that they turn immediately into full-blown, two-way conversations (as interviews should), supposedly have a mandate to make the guests talk about subjects including but not limited to comedy, sex, and God — the subjects that, when broached in everyday chat, “make it weird.” This would indeed make weird an interview program with, say, airline executives, but I feel like a lot of these comedian guests, a lot of these Sarah Silvermans [MP3] and Doug Bensons [MP3] and Moshe Kashers [MP3], would’ve gone there anyway.

Hence the show’s greater interestingness — hence most comedic productions’ greater interestingness — during the times it moves away from direct joke-making to discuss the logic, psychology, and pathology of joke-making from oblique angles. I’ve especially relished the times when Holmes and his guests don’t really talk about joke-making at all. The Pete Holmes neophyte finds out sooner or later that, in addition to using his standup to make people laugh, Holmes has drawn New Yorker cartoons to make people laugh — or whatever people do when they express appreciation for New Yorker cartoons. Allow me to express my own great appreciation here for his recording of a three-way commiseration [MP3] about the brutal mechanics of submitting New Yorker cartoons with fellow cartoonists Matt Diffee and Alex Gregory.

And then we have the fact that Pete Holmes asking about God means something different than a “normal” alt-comic asking about God. While not a Christian in the sense we coastals understand the concept from the Huffington Post reblogs we forward, he seems to have grown up immersed and deeply shaped by that distinctively American subculture of guitar-strumming, promise bracelet-exchanging, youth group-going Bible-readers who, given the chance, will totally invite you to the beach barbecue. Large fragments of the “Sparky” demeanor you’d expect from such an upbringing still glint in his comedic persona, but he’s left that world behind. He hasn’t gone totally apostate, but nor has he not gone apostate. He doesn’t bemoan the vestigial prudishness that has left his bedpost with so few notches, but nor does he not bemoan it.

You wouldn’t necessarily expect this struggle within the soul of a modern comedian, least of all on a podcast. But then, would you expect the strongest jokes to come straight out of the very topics these conversations reach when steering away from comedy? As Holmes quotes himself as saying, “Expectation is the enemy of comedy,” a line that swiftly crystallizes every reason I’ve ever folded my arms and harrumphed at the mere idea standup, sitcoms, or one-liners. It also explains why my very being gives way to unstoppable chuckling at discussions of, as you’ll hear on You Made it Weird, theology, brain hemorrhages, sexual guilt, and Full House. As the hale green shoot sprouts from the stale muck, so the funny rises from the comedically intert.

[Podthinker Colin Marshall, formerly of the public radio program The Marketplace of Ideas, now hosts and produces Notebook on Cities and Culture [iTunes]. Contact him at colinjmarshall at gmail.]