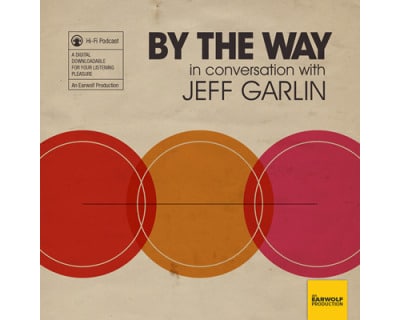 Vital stats:
Format: Jeff Garlin talking before a live audience with people he respects and/or people who interest him
Episode duration: 1-2h
Frequency: 2-3 per month

I suppose we must live in the Age of Conversation. Podcasts gave me that impression, and podcasts — the ones I listen to, at least — have given me no reason to deny it. Despite having rejoiced at the seemingly limitless formal possibilities newly opened up by the medium, especially against the seemingly numberless limitations under which many radio programs still labor, I notice that my most memorable podcast listening experiences come from nothing more innovative than people talking to one another. Then again, the least memorable podcasts I’ve heard (to the extent, of course, that I can recall them) also featured nothing more than people talking to one another. Indeed, most podcasts, the enjoyable and the less so, need nothing more than a few microphones and enough people to speak into them. Out of this easiest of all configurations comes, it seems, podcasting’s both highest and lowest moments. Into this peaceable ring of extremity Jeff Garlin dares to throw his hat with his very own conversation podcast, By the Way, in Conversation with Jeff Garlin [RSS] [iTunes].

We must here define a subgenre: within the bounds of the conversation podcast, we have the more specialized celebrity conversation podcast, in which a certain celebrity, presumably feeling they can hold, in their own personae, conversations of interest to audiences wider than those actually at their dinner parties, hold them and turn them into MP3 files. Sometimes this assumption works out; sometimes it doesn’t. Alec Baldwin’s Here’s the Thing stands out in my mind as a particularly successful example of recent years, though he takes the strategy (with assistance from WNYC) of making the proceedings sound as public radio-y as possible. Conan O’Brien’s Charlie Rose homage Serious Jibber-Jabber strikes me as ranking in a similar league, despite appearing only as videos, and sporadically at that. Garlin goes the route of maximum rawness, recording in front of a live audience at Los Angeles’ Largo — a place I tend inexplicably to conflate with Los Angeles’ Spago — and cutting out, apparently, only what absolutely needs currently out. But he has taken this on as a mission: a mission, he says, set against the highly produced, thoroughly pre-interviewed, rigorously edited interview programs so prevalent today. I can sign on to that.

You probably know Garlin, as I do, from his role as Larry David’s agent on Curb Your Enthusiasm. You may also know him, as I do, from his current appearance on countless billboards and side-of-the-bus advertisements for a sitcom called The Goldbergs. I see these as I bike around, often past Largo, often listening to By the Way, a show on which Garlin admits that, despite starring in it, he’ll never watch The Goldbergs. That comes as only one of the confessions freely made, by interviewer and interviewee alike, on this podcast, which adheres, so I gather, to the principles on which he has built his stand-up act. Knowing Garlin, again, primarily from his role on Curb Your Enthusiasm, I hadn’t realized that he made his name in stand-up, but apparently he did, and on top of that, he did it with an act either mostly or wholly improvised. His podcast conversations. proceed on a similar absence of a planning. Some guests understand this immediately, while some, like Arrested Development creator Mitch Hurwitz, take their time to do so, but Garlin manages to draw each and every one of them out in the end.

Arrested Development fans will remember that Garlin did a stint on that show, which may have had something to do (whether he got the role from knowing Hurwitz or whether doing the role got him closer to Hurwitz, though a combination of both seems truest) with that particular choice of guest. And his position as a driving force of Curb Your Enthusiasm no doubt played a part in the arragement of By the Way’s debut episode: a rare conversation with none other than Larry David, who, so the episode reveals, has never in his life put a quarter into a jukebox, nor taken a photograph of any kind. This, as any dedicated podcast listener will by now have gathered, reveals the advantage of the celebrity conversation podcast: celebrities know other celebrities, and other celebrities whom interviewers less close to them couldn’t convince to sit down for a show, much less a podcast, much less an unedited podcast. For his second episode, Garlin interviews Girls creator and star Lena Dunham, whom he seemed to half-know through a few of the same circles and maintained an entertaining SMS-based relationship. One night he finally encountered into her at a party, so the story told on the podcast goes, and not much time passed before they found themselves seated at a ¾ angle across from one another at Largo.

Garlin’s connectedness gets him in the podcasting room with a wide swath of people he admires, as he puts it, and people who simply interest him: J.J. Abrams, Judd Apatow, Marc Maron, Michael Moore. The freeform nature of By the Way allows Moore to do about half an hour on why he thinks that O.J. Simpson might not have committed those murders, or at least why he thinks those murders may have had a less-than-sound investigation. While I didn’t come away completely convinced of his points, neither did I come away completely unconvinced of his points. But those looking for less politically charged interviews will find them in Garlin’s episode with former band frontmen like singer-songwriter Colin Hay, who rode the Men at Work rocket up in the early eighties, or Black Flag’s onetime singer Henry Rollins, who has much more to say about travel, his water usage (our host’s opening question: “How do you shower?”), and the value of curiosity than his particular brand of activism. Garlin’s questioning itself illustrates the value of curiosity, call it self-indulgent though some may. Sure, you’ll hear him deliver several variations on the same stories — his manifold health problems, the loss of his virginity to a heckler in a lifeguard shack — but I defy you to find many more illuminating Conan O’Brien interview in recent memory than his. Garlin calls O’Brien the funniest man he knows. But the funniest person? Amy Sedaris. I eagerly await their talk.

[Podthinker Colin Marshall, who has eight Podthoughts to go before retirement, also hosts and produces Notebook on Cities and Culture [iTunes] and writes essays on literature, film, cities, Asia, and aesthetics. He’s working on a book about Los Angeles, A Los Angeles Primer. Contact him at colinjmarshall at gmail or follow him on Twitter @colinmarshall.]