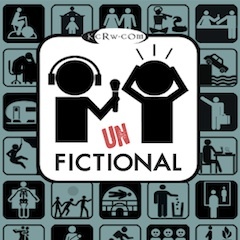 It’s not easy to title a show, granted, but avoiding fiction strikes me as a mark of no particular distinction in public radio. Indeed, in more judgmental moments I pin the blame for the creative malaise afflicting the industry on its upper ranks dominated by people who began in (or have spent a little too much time in) newsrooms. This produces a number of deforming forces, from flamboyantly pious J-school convictions about the truth all the way down to simple stodginess. What a pleasant surprise, then, to hear in UnFictional [RSS] [iTunes] very little stodge at all. Why, airing stories about colossally powerful car stereos, self-immolation, blind baseball, and the U.K. roller derby, it almost makes us describe it as stodge’s opposite — but let’s not go crazy. We’re talking about public radio standards here. In fact, I suspect I’ve already implied more radicalism than the show can realistically offer.

Despite no doubt having rattled a few cages here and there over the past three years, UnFictional comprises, for the most part, radio documentaries of the same basic type we’ve been hearing for three decades. (This tradition tends these days to favor things like “sound-rich” portraits of barrio life, which explains why I find so little support for my own projects, most of which are multi-hour conversations about Graham Greene.) The whole production comes as one of the newish offerings from KCRW, long the “cool” public radio station in Los Angeles. Don’t read those air quotes as sarcasm; KCRW really does have the coolest programming, in part due to shows like this one, though it also trades on “cool” as a vibe — again, public radio standards, mind. Yet as a listener, I’ve in recent years begun to glimpse a frown of deep discomfort behind the station’s Wayfarers. With its schedule split between music, news, and cultural talk — not to mention Tuesday night’s unmissable Santa Monica City Council meetings — KCRW probably fears the simultaneous eating of its lunch by predominantly newsy KPCC and music-oriented KCSN. An understandable fear, but one born, I would argue, of a framing mistake.

If I think of KCRW as cool, I do so because, at the risk of self-flattery, it attracts cool listeners. What’s more — and here comes the crucial bit — its schedule as a whole retains only the cool listeners. Anxiety about whether any given Angeleno will “stay with them” from music to news to film or book talk back to music thus strikes me as ill-founded since, as I see it, cool people can by definition shift cultural and aesthetic gears every hour or two — and want to. Even just taking UnFictional as an example, not only will a cool listener tune interestedly in for the high-dB amps and the Tibetan lighting himself on fire and the beeps of home plate and the Cockney lasses elbowing each other, they’ll come back for Irish train-hopping, lucid dreaming, and Whitey Bulger. Their engagement, to pull out a term admittedly sicklied o’er with the pale cast of marketing, goes broad and deep.

But seeing as the lame people, defined by the quintessentially lame practice of only being interested in their interests, outnumber the cool people thousands to one, the temptation to also attract assholes pulls strong. Yet I still recommend that quality-minded media outlets lash themselves to the mast, since now more than ever we find ourselves out of the three-channels-on-TV era and in the one where you can thrive on audiences that, while small, are actually good at life. But don’t let me hold myself up as some kind of paragon. Even I get into some KCRW shows more than others: I enjoy Michael Silverblatt’s Bookworm, for example, to the point of worship, whereas I also enjoy Good Food, but it occasionally induces flop sweats at visions a revolutionary horde of 38-year-old women in the same way that some fearfully envision vast Jewish conspiracies. Yet my ideal public radio station would let a hundred flowers bloom, of the Bookworm to the Good Food varieties and all in between. This imaginary station wouldn’t just carry one UnFictional; it would carry dozens, each going off in its own direction.

As it is, the show opens too wide an umbrella to make description easy. Theoretically, it showcases real-life documentaries fostered by KCRW’s Independent Producer Project, which aims to get independently produced content into listeners’ ears. For a recently launched mission, this has a queerly pre-internet ring — I can, and often do, get buried with millions of hours of independently produced content at the click of a mouse — but even UnFictional ditches the premise when it feels like it. This most often happens when the show gets a visit from satirist Joe Frank, who today delivers the same sort of amiably humorous, subtly discomfiting, and maddeningly digressive scored monologues that made him cultishly famous on NPR Playhouse in the late seventies and early eighties. On a just media landscape, would Frank possess the regard and renown of a Howard Stern? Impossible to say, but at least his work will always resonate with the cool people. One such cool person, former station general manager Ruth Seymour, brought Frank onto KCRW in the first place. Despite having never met the lady, I get the sense that she embodies everything I’ve said about playing only to the sharpest. I’ve heard she’s sorely missed.