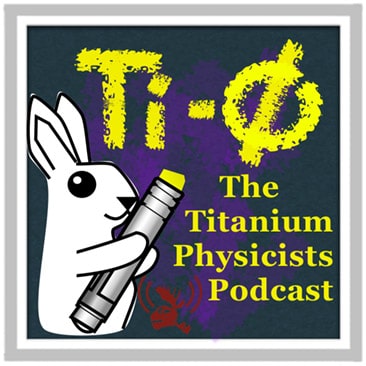 The science podcast The Titanium Physicists [RSS] [iTunes], it may not surprise you to hear, sometimes references the web comic xkcd. The enterprises share not only a sensibility, catering to the now-proud “geek” culture, but, seemingly, a business model: xkcd creator Randall Monroe supposedly makes the lion’s share of his revenue by selling themed T-shirts, and The Titanium Physicists host Ben Tippett often pitches garments similarly branded in accordance with his own intellectual property. He comes right out and calls them “a little expensive” — $22.99 to $27.99, turns out — but then underscores their durability. I may have a weak grasp on most if not all of the ideas of physics discussed on this show, but I do know a thing or two about higher-quality and thus pricier yet long-lived garments costing, in the long run, less than cheaper ones. Witness my essays on the matter for Put This On.

Admittedly, I also don’t know who actually buys the T-shirts that keep all this internet content afloat, from web comics to podcasts to vlogs to MP3 albums to multi-user dungeons. I myself seldom have occasion to wear a T-shirt as my outermost, visible layer when not actually asleep, no matter how inflated my enthusiasm for the logo, joke, or URL emblazoned on its chest. Yet even now, thousands of human beings just like you and me order the T-shirts, and even hoodies, that subsidize the things we like to watch, read, and hear. I have similar questions about other supposedly popular wearables, such as Teva sandals: people buy them, obviously, but which people? Not that I claim total ignorance. We’ve all noticed that Tevas have achieved a strange prevalence in the science and engineering communities. In fact, I’d bet folding money that some The Titanium Physicists’ regular panelists — the Titanium Physicists themselves — have on Tevas even as they record. Don’t ask me how I know; at this point, I simply feel it in their voices. And that aside, I think even cold, hard Vegas odds would back me up, given the correlation between the percentage of a person’s life dedicated to the natural or applied sciences and the likelihood of that person’s wearing Tevas — or podcast- and web comic-branded T-shirts, for that matter.

I settle even deeper into my suspicion when I scroll through the roster of Titanium Physicists, some 25 strong, whose bios include phrases like “works on relativistic astrophysics,” “studies accretion disks around black holes,” “expert on superconductors,” “knew all the unix commands,” and “went to Princeton.” On each episode of the show, Tippett, who “does research on black holes and gravity and stuff,” summons a handful of them to Skype to talk about such advanced-sounding physics concepts as dark matter, the ice cube neutrino detector, particle decay, and Cepheid variables. So we have here a sort of physics-centered In Our Time (written up by my esteemed predecessor Ian Brill here), though where that show always enjoys the reliable presence of Melvyn Bragg to ask the simple questions unapologetically, forcing his academic guests to break down their sometimes-esoteric subjects into publicly digestible chunks, this one has to look around for its equally necessary nonspecialists.

This pack of podcasters and web comic artists (and another occupation or two, if you can believe that) includes the one and only Dave Shumka, best known as Canadian comedian co-host of Maximum Fun’s own Stop Podcasting Yourself. No accident, his professional comedian-ness; these non-physicist guest come not only to inquire about the very basics of particle acceleration and quantum cryptography and superfluids and such, but to crack a few jokes as they do so. Not that the Titanium Physicists don’t have senses of humor, but you know how sometimes, amid a group of scientists, you actually get more alienated, not less, when they start dropping punchlines? (Again, think xkcd.) Shumka’s Canadian-ness also lines up with the podcast’s apparent mission, or at least slight quality, of Canada-centricity; a fair few of the Physicists went to Canadian schools, some even to the University of British Columbia with Tippett himself.

This strikes me as all to the good, what with my personal inclination toward place-rooted projects and fascination with things Canadian, though I wouldn’t want to overstate it, since the show does make serious use of Skype’s capacity to connect people based in all manner of geographically far-flung but physics-rich places. (Why, exactly, physics-rich places tend to get flung into obscure geographies no episode has yet revealed to me.) Yet I do come away from The Titanium Physicists with the impression of a more deeply Canadian quality retained. It brings to mind the only quote I know from Ernest Rutherford, the guy who seems to have invented nuclear physics: “All science is either physics or stamp collecting.” For all the outward modesty you’ll find in most of them — almost to the point of celebrating their supposed ignorance, not knowledge — I have a sense that many physicists, in their heart of hearts, believe themselves engaged in the sole truly productive human endeavor. By the same token, I wonder how many stereotypically meek, self-effacing Canadians, on some reflexive, unconscious level, hold the iron conviction of their country as the only one truly worth living in. But who among us dares dispute either of them?

[Podthinker Colin Marshall, who has one more Podthought to go before retirement, also hosts and produces Notebook on Cities and Culture [iTunes] and writes essays on cities, language, Asia, and men’s style. He’s working on a book about Los Angeles, A Los Angeles Primer. Contact him at colinjmarshall at gmail, follow him on Twitter @colinmarshall, or like his Facebook page.]