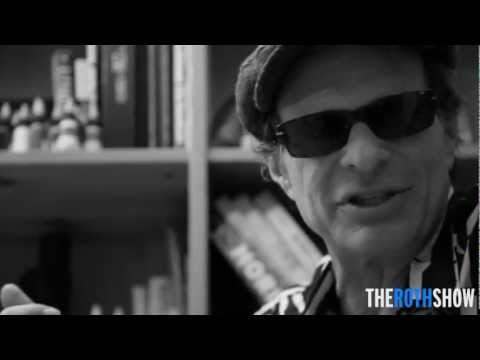 I found out about The Roth Show [RSS] [iTunes] from an in-depth profile of its host, yes, former and current Van Halen lead singer David Lee Roth. The article, Steve Kandell’s “David Lee Roth Will Not Go Quietly”, appeared on Buzzfeed, of all places, but I didn’t judge, I just marveled. Specifically, I marveled at Kandell’s description of Roth’s lack of furniture and possession of “a rack of Japanese katana swords,” his successful completion of an EMT program in New York and tactical medicine training in Southern California, his 600-pound ex-sumo wrestler language mentor, his apartment in Tokyo, his lifestyle “rich and weird and singular and driven by very particular and exotic enthusiasms ranging from mountain climbing to martial arts to tending to gunshot victims in the Bronx.”

Needless to say, Kandell’s mention of a Roth-helmed “sprawling one-man video series and podcast that aspires to do nothing less than tell the history of modern culture through the eyes of someone who has been everywhere, done everything, met everyone, and hired a couple of midgets to be his security detail along the way” raised my eyebrow. “It’s nothing more or less than David Lee Roth speaking for a half hour on, more or less, a single topic. Tattoos. FM and underground radio. The history and semiotics of pop videos by way of Picasso. A long-ago trip to New Guinea. His personal history with drinking and smoking. Slideshows from an unending vacation. The episodes are monologues, history lessons, personal taxonomy, but really, mostly just talking and more talking, social-studies lectures by way of rock ‘n’ roll Babylon, at carnival-barker cadence.”

I quote so heavily from this profile not just because I couldn’t describe this podcast any better, but because I come from a different place than Kandell, who grew with a bed over which a Van Halen poster hung depicting Roth “frozen in an eternal mid-air split.” Having barely ever listened to Van Halen myself — as “eighties bands” go, farther askew Brit names like Wang Chung and the Human League have always dominated my playlists — I, on the other hand, didn’t have a voice to put to the voice, if you will. In listening to the seventeen currently available episodes of The Roth Show, I listened not to the pronouncements from on high of a rock star I once worshipped but to the stories of a man who has engaged in a great many fascinating pursuits, living a life from which only the consummately dense could fail to learn a few lessons.

It seems Roth himself now prefers notoriety for his high-octane joie de vivre than for his rock-god status, inside or outside Van Halen. Yes, he’ll talk on his podcast about “Jump”, but as a means of talking about the cinematic techniques employed in its much-imitated video, and even then as a means of talking about the various “languages” learned in the infinitude of human disciplines, from video production to ballistics to swordsmanship. Or maybe he’ll bring up the song in order to talk about a more recent remix he commissioned, hoping to give listeners as much of a Judas jolt as they got when Eddie Van Halen whipped out that synthesizer in the first place. He embraces the now, whether that means oscillating between his bases in New York, Pasadena, and Tokyo; seeking out only the finest inks to use in his agonizing, years-long traditional tattooing process; continuing his decades-long process toward kendo mastery; or attending two to three hours of Japanese-language school a day, all at an age, as he often puts it, “just south of sixty — in my generation, the new eighty.”

You’ll notice a certain tendency toward things Japanese in this account of Roth’s interests which, as much as anything else, pulled me into a podcast from the frontman of a band I haven’t followed. Roth has stories — my, does he — about how this happened, a process which had to do with his growing up in Southern California amid a large chunk of the Japanese diaspora for whose sensibilities he found himself developing a great respect. He often mentions the inspiration he drew from frequenting a number of other cultural, social, and artistic “neighborhoods,” usually black and Spanish-speaking, but when he talks about Japan on the show (which, of course, he sometimes does at home from Japan), he reveals a connection to that culture that resonates with a deeper drive in his own being: the drive to craft which, as manifest in Japan as well as in the world of David Lee Roth, has as much to do with creating as it has to do with endurance, humility, and near-obsessive focus. Jiro Dreams of Sushi has, I suppose, become the modern reference for this sort of thing.


We might say that Roth, whom few have presumably ever called either humble or focused, brings an unexpected touch of Jiroian intensity to the variety of his activities, from handling a blade to getting tattooed to learning languages to stopping bleeding to taking harrowingly extended trips to remote islands to warming up with thirty or forty renditions of the O’Jays’ “Love Train” to, indeed, performing “Jump” and jumping around an intricately designed stage as he does so. The deceptively advanced musicianship of Van Halen figures into the stories he tells, and his sense of craft feeds back into the storytelling itself. Kandell frames the project of The Roth Show as Roth “using his own war stories to educate a generation driven to complacency,” and, as energized a such a mission gets me, I assumed its hiatus last may would turn permanent. But lo and behold, Roth returned with the debut of his second season just this past Wednesday, the first chapter of a veritable multigenre rock opera build around the countless musical traditions that have influenced him since childhood. I’d fallen for the same emotional trap at the core of the Van Halen machine: they “create the aura that it may never happen,” as Roth puts it to Kandell. “Has this served us well? It’s served us superbly.”

[Podthinker Colin Marshall, who has two more Podthoughts to go before retirement, also hosts and produces Notebook on Cities and Culture [iTunes] and writes essays on cities, aesthetics, Asia, and men’s style. He’s working on a book about Los Angeles, A Los Angeles Primer. Contact him at colinjmarshall at gmail, follow him on Twitter @colinmarshall, or like his Facebook page.]