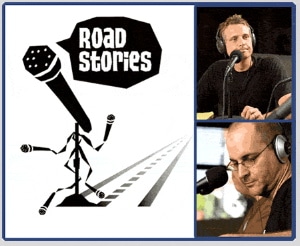 Getting familiar with and laughing at the jokes of all sorts of comedians on all sorts of comedy podcasts, I’ve grown curious about the nauture of their, y’know, actual careers. Podcasting’s great and all — nay, the greatest form of media in our time — but it doesn’t tend to pay the bills. So what do all these funny folks who host the podcasts and/or loop around the podcast guest circuit actually do?

Turns out that most of them do just what you’d expect them to do: straight-up stand-up comedy. Even though the late-eighties stand-up bubble burst long ago and most podcasting comedians seem to take a lot of roles on movies and television shows (that sometimes see the light of day and sometimes don’t), comedians still seem to earn their bread and butter by getting in front of the old brick wall (actual brick or no), taking to people, and — if the stars align — making those people laugh. I learned a little more about that bursting stand-up bubble and all those supplementary media appearances from Road Stories [RSS] [iTunes], but oh, how much more it’s taught me about the comedian’s life.

Specifically, it’s taught me that the comedian’s life often just totally sucks. Don’t take that the wrong way; I admire the craft of comedy more every day, and most comedians I hear on podcasts seem like dedicated, hardworking, freakishly intelligent — or, at the very least, freakishly fascinating — people. But man, the crap they deal with. I cringe even now at the memory of some of the road stories told on Road Stories: performing at county fairs under the beating afternoon sun, consignment to anonymous midwestern hotel rooms for weeks at a time, dealing with hecklers as the audience slowly tilts over the tipping point to the hecklers’ side, the bitter spite of colleagues, crowds who can’t grasp the existence of more than one comedic sensibility, grabby swarms of fans-who-aren’t-really-fans. I remember once working alongside a smooth jazz radio announcer and former comedian. One day, I asked him about his old career telling jokes. He set his cigar down, fell into a thousand-yard stare, and muttered only, “The road’ll kill ya.”

Yet for all the grimy, car-crash appeal hosts Murray Valeriano and Joe Wilson draw out of their podcasting-favorite guests like Jackie Kashian, Chris Hardwick, Graham Ellwood, Chris Fairbanks, Maria Bamford (who offers a particularly trenchant criticism of the women’s events she works [MP3]), and Matt Braunger, an even more enduring appeal lies at the show’s core. At their best, the panels confront one of the ultimate questions: “What makes it good?” In this case, “it” could mean “comic’s performance,” but it could also mean “audience,” “venue,” “tour,” “midwestern hotel room,” or even “heckler.” And the discussion spends as much or more time on the all-important “What makes it bad?” (Not always happy people, these comics. Don’t know if you knew that.)