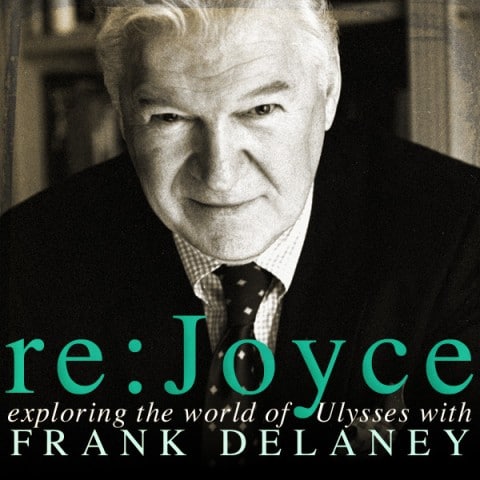 If you described the medium of podcasting to an aspirational American of sixty years ago — the kind with a complete shelf of Mortimer Adler-approved Great Books of the Western World, purchased whole — they’d imagine something like Frank Delaney’s Re: Joyce [RSS] [iTunes] as its primary use. For a time, we envisioned all forms media as potential delivery systems for read-along literary and historical lectures by learned, articulate middle-aged men, preferably from across the Atlantic. Delaney thoroughly embodies these qualities, and in fact he once received National Public Radio’s anointment as “the most eloquent man in the world.” I know because the quote appears prominently in the header of every page on his site, as it would on my own. NPR has never made a big deal of my articulateness, but if they ranked me even among the top twenty, I assume they’d grant me as much airtime as I need to say whatever I want.

This, in any case, is why Delaney will dominate America’s public airwaves once a week for the next 27 years to discuss James Joyce’s Ulysses. As least I assume he will, since my mind can’t process the notion that NPR wouldn’t see fit to commit all necessary resources to an exegesis of one of the most important novels ever written in the English language by the man they named the most eloquent in the world. Though I personally listen to the show as a podcast, my brittle value system requires me to believe that other families gather round the wireless each and every Wednesday to hear celebrated one more facet of Joyce’s linguistic, structural, and sheer Dublinistic acumen. The majority of the broadcasts only run between five and fifteen minutes, after all, which only slightly exceeds American radio’s ever-supercilicizing estimate of audience attention span. In fact, I’ve surely gotten to you far too late; you’ve no doubt already listened to every episode since the show’s inception two and a half years ago. I should instead point you to something more marginal, like Two and a Half Men. I hear it is a situation comedy.

But if you somehow have yet to catch up with Re: Joyce, you’d best start now. Delaney has thus far spent 141 episodes reading through Ulysses, at a pace of what seems like one line to one paragraph per. He doesn’t read slowly; he appreciates extensively. Each scrap of text sends him on a textual dig, excavating another corner of this dense labyrinth of references, allusions, multiple meanings, and simple jokes. (Simple to James Joyce, that is.) Delaney’s enthusiasm for this novel comes through in every single episode in a manner that feels freakishly untiring until you consider that Joyce’s fans value his writing for its own bottomlessness. The author claimed to have “put in so many enigmas and puzzles that it will keep the professors busy for centuries arguing over what I meant,” and thought this would grant the book “immortality.” I read this on Ulysses’ Wikipedia entry, a page at which I recommend prospective listeners take a glance. Otherwise, they’ll get through twenty episodes wondering why they keep hearing about the same brief, snippy exchange between a couple of Irishmen named Stephen Dedalus and Buck Mulligan.

Wait, Stephen Dedalus? The guy from that other James Joyce — novel? Autobiography? — book, Portrait of the Artist as a Young Man? And who’s this Buck Mulligan? I thought Ulysses followed a guy named Bloom on a day’s walk through a stringently, near-autistically realistic description of early 20th-century Dublin. Didn’t they name the day of this supposed walk Bloomsday for that very reason? Questions like these, as well as the difficulty of some of the prose that prompts them, tend to put hopeful readers off the book. A hearty Virgil like Delaney can help them power through this wall, but his very appreciation of Ulysses — of its intricate craft, of the genius of its creator, of its sheer greatness — can at the same time discourage them again. Finding your own approach to any work of art that has become a monument to its own achievement can seem impossible. Someone pointing out that it’s full of patterns usually helps as much as it sounds like it would.

But unlike many lesser teachers of literature, Delaney doesn’t really insist that you comprehend. He clearly understands that sometimes, with a worthwhile book — often, with a worthwhile book like Ulysses, especially the first few times through — you’ve just got to roll with it. Whether you choose to read the novel first and then listen to Re: Joyce, listen to Re: Joyce as preparation for reading the novel, or read the novel along with Re: Joyce, I offer the same advice about listening to the podcast: just roll with it. You’ll quickly tire of hearing the name “Buck Mulligan” spoken so many times, but I assure you the feeling will pass. Listen to five or ten episodes at a sitting; forty or fifty in, you’ll find your listener’s mind has engaged with Delaney’s readerly mind, and accepted that it can’t contextualize everything right away. Unless you’re especially young, though, I recommend you start reading Ulysses without waiting for Re: Joyce’s completion, which Delaney has scheduled for his hundredth birthday in 2042. So we have an additional drama in the question of whether he’ll make it — and whether we’ll make it. The finished product could well turn out to be the most compelling possible endorsement for eschewing retirement in the name of continued active-mindedness. To put it mildly.