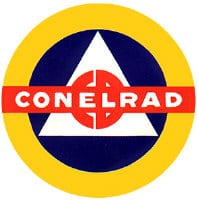 I felt a blip of recognition upon reading the title of Radio Conelrad [iTunes], but I now think it was a false positive triggered by memories of the ColecoVision. “Coleco” stands, need I even explain, for Connecticut Leather Company. “Conelrad” turns out to stand for Control of Electromagnetic Radiation, the form of government broadcasting that preceded the Emergency Broadcast System. I could make a bunch of guesses as to why host West Anthony decided to name his podcast after it, but only one holds water: the old circular Conelrad logo looks sharp and important on an iPod screen.

Both the fellow who recommended the show to me (Rudie Obias of The Criterioncast) and Anthony’s own Twitter profile pitch brevity as its main selling point. That it has; nearly every episode I listened to ended just as I assumed it had reached “cruising altitude.” This usually takes five to fifteen minutes. During that time, West will have solo-talked about one to three topics. I figured he might talk about midcentury Americana-type stuff, given the show’s name, but no; his concerns revolve mostly around contemporary mainstream culture, like which Oscar nominees he doesn’t think deserve an Oscar, or which viral Miley Cyrus videos he thinks don’t merit the uproar they’ve raised, or how he doesn’t care about the Beatles’ appearance on iTunes.

People can have opinions on all these things, but I never fully understood why I was listening to this particular guy’s opinions on them. I don’t mean to call him not famous or credentialed enough to earn my attention; I just have no idea who he is. Plenty of my friends and favorite podcasters lack fame or credentials of any kind, yet I still listen to them because I know their personalities well enough to contextualize their statements. Even after listening to the complete Radio Conelrad archive, I can’t really tell you anything about West Anthony. He sounds neither young nor old. He speaks in a bold but occasionally halting fashion, sometimes with a slight echo. He tends to use a “radio voice,” but often to say things you wouldn’t usually hear such a voice say.

One of the least expected set of things he says comes in an episode recorded after the Arizona shootings where he just goes off on Republicans for a while. After a few minutes of this, I grew uncomfortable at my inability to tell how seriously he meant his claims about Republicans maliciously hoodwinking the population, ruining society, dismantling America, etc. I don’t even like the Republican party, but when the host of something I like starts grinding away in these directions, I just think, “Stop. Stop. Please stop.” I feel the same way when someone talks to me on the street, says a few sentences I agree with, then follows them up with scary schizophrenic monologues about how Dick Cheney poisons the water supply.

That aside, Anthony seems like someone you could hang out with. I know I could hang out with him because, in one episode, he insists that The Thin Red Line should have won Best Picture instead of Shakespeare in Love. I gather that we could easily talk about Terence Malick for a few hours, and that he has enough of a sense of humor to make a few cracks about Malick’s weakness for the image of the “noble savage” even as he admires the director’s greater aesthetic sensitivities. But what if he started talking about Sarah Palin or something? What would I do then?

[Podthinker Colin Marshall also happens to host and produce The Marketplace of Ideas [iTunes], a public radio show and podcast dedicated to in-depth cultural conversation that, this week, needs 211 new subscribers to survive the year.]