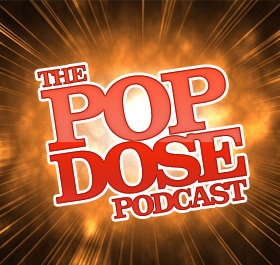 This is the heyday of pop culture discussion, perhaps in quality but most definitely in quantity. For this we have the media of blogging and podcasting to thank, which provide nearly ready-made outlets for pop-cultural commentary to damn near everyone, since damn near everyone possesses both (a) a computer and (b) strong opinions on whatever happens to float through the zeitgeist. Some take up this gauntlet in a relaxed fashion, casually tossing words out via their keyboard or microphone whenever the spirit moves them. Some take the enterprise more seriously, almost to the point of fixation. Popdose.com is one of those operations.

Not that Popdose’s contributors are dour types given to proclamations about which flashes in the pan “speak volumes,” have proven “epochal” or, worst of all, are “important.” On the contrary; they’re actually a lot more interested in making jokes about one another’s moms. At least that’s the image put forth by The Popdose Podcast [RSS] [iTunes]. These Popdose fellows clearly don’t solemnly regard themselves as the anointed arbiters of entertainment quality; they’re just out to hang out and make a few cracks about Richard Marx.

To summarize the format of the show, it’s one of those affairs where three guys get together on Skype and joke about whatever they feel like talking about in pop culture and oh lord this sentence is just too disheartening to write. And that’s no knock on this particular podcast; it’s simply chosen an awfully steep hill to climb, though its pedigree as an offshoot of an existing site with its own fanbase gives it something of a rocket boost. (Heaven help those that lack it.) Certain anonymous respondents who have gotten on your Podthinker about his use of the TTWGBAC genre designation will be happy to learn that the Popdosers skew older, and that at least one of the them seems to be in his forties, thus invalidating the second T in that abbreviation and technically — if not in spirit — disqualifying the show from that crowded category.

The Popdose Podcast‘s most obvious distinguishing characteristics include its hosts’ recurring focus on their childhood memories — this is more entertaining than it sounds — and its use of slickly humorous custom-made jingles composed by a man who allegedly spent the previous thousand hours listening to nothing but David Foster music. (The influence shows itself.) There are also certain regularities, like a Slate Culture Gabfest-style endorsements of select works or events. And those mom jokes clearly count for something.

But any and all podcasts of this type stand or fall on one-ish quality: the likability and familiarity of the hosts. Dave, Jason and Jeff seem like sharp guys, though your Podthinker dares say that, even after hearing all of the current material available, he doesn’t know them very well. No matter where one starts, picking up this podcast is like dropping in on a conversation between friends that’s been in progress for a while already: stuff gets referenced, name-checked and remembered that you’ve got no hope of recognizing, unless maybe you’re already a Popdose reader. (It’s unclear what extent of Popdose knowledge is assumed on the listener’s part.) But they’ve got a solid rapport and are pretty funny together, crafting more than the occasional moment of laugh-out-loud humor. Perhaps they undercut the effect somewhat by laughing a bit too hard and a bit too long at one another’s jokes, but it’s all in good fun.

And of course, “pop culture” is not some undifferentiated subject glob but a wide field of various sub-terrains. “What kind of pop culture?” is always a question worth asking. Here, in The Popdose Podcast‘s case, is the answer: John Oates’ mustache. Guiding Light. That Christmas album by John Denver and the Muppets. Guggenheim Grotto. Phil Spector. Mellow gold. Macaulay Culkin. Ben & Jerry. A surprising amount about Mariah Carey. Bourbon. Your Podthinker now trusts he has endowed pop culture-fan readers with enough information to make the informed decision about whether to spend time in Dave, Jason and Jeff’s audio company. Just don’t let them near your mom.

[Got a podcast to suggest for Podthoughts coverage or any other sort of question and/or comment for Podthinker Colin Marshall? colinjmarshall at gmail.]