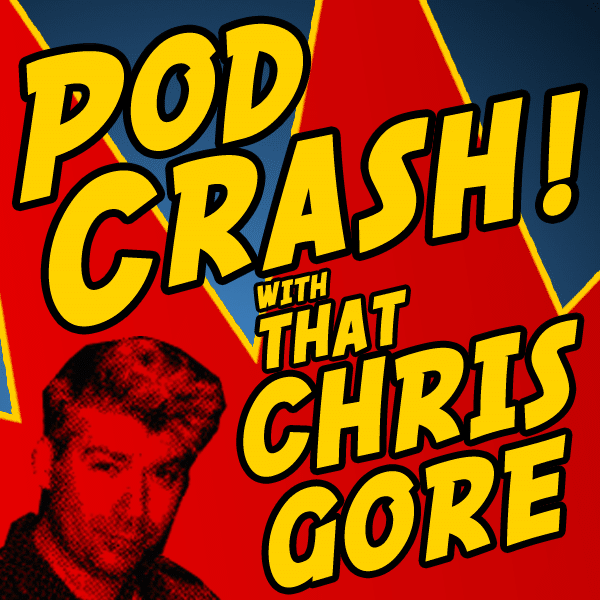 “TV Made Fresh Daily”: that, to me, remains the core product of the FX network. Then again, I haven’t watched since about the turn of the millennium, but so many of my pleasant televisual memories come from tuning in to FX back in high school that I suppose I don’t need to. I remember staying up “late” to watch their “uncensored” airing of Kevin Smith’s Clerks, for instance, an event I’d anticipated for weeks. This happened relatively early in my development as a young cinephile, that time when you do your movie-watching and knowledge-gathering indiscriminately, whenever and wherever it seems possible. You’d also value any meeting, even if only virtual, with fellow movie-hungry minds. I sensed one of those in the skull of a fellow named Chris Gore, who one day started popping up in FX promos for something called The New Movie Show with Chris Gore, subject obvious. I gathered that, in addition to his duties as a cable host — duties that, in their exuberant marginality, I found weirdly admirable — he’d founded a movie magazine called Film Threat. Cool.

Having mastered the sort of film journalism the hyper-mainstream would call “irreverent” during America’s indie boom of the nineties, Gore gained a reputation as an authority on independent filmmaking and festivalgoing. This he still exploits in a variety of ways, and his television appearances continue, I believe in the form of DVD evaluations, on G4’s Attack of the Show. A dozen years after The New Movie Show with Chris Gore, we expect anyone who makes their living commenting on the cinematic scene, and especially one who compulsively jokes around the way Gore does, to put out a podcast; the medium has suddenly become the spine of so many comedic, critical, and generally Gore-style careers, the likes of which none of us could have explained to our great-grandfathers. He says his fans had hassled him for years to do a podcast. But I’m too lazy to do a podcast. So I’ll just go on other people’s podcasts. This is PodCRASH [RSS] [iTunes]. Or so the theme song goes. Though Gore takes pains to highlight the self-obsession inherent in this premise, I find it one of the few genuinely interesting new concepts going in podcasting.

Each episode presents a guest appearance Gore has put in on another podcast, so when you listen, you hear not just PodCRASH, but whichever podcast he happens to have turned up on that week as well. He pitches it as an opportunity for us to hear a variety of podcasts, many of which we won’t have known about before, and as an opportunity for him to talk about whatever he wants. This may have a narcissistic element to it, but not one quite so painful as Gore, who constantly makes pre-emptive cracks about it, seems to think. His show really does provide a view across the landscape of podcasting (especially the patch where guys get “irreverent” about movies) and, beyond that, offers a study in how an individual must bend their personality to suit shifting contexts and circumstances. I get the sense that Gore prides himself on saying exactly what he feels at all times, regardless of who hears it, but as essentially an entertainer, he has no choice but respond to feedback from what pure comedians would call “the room” — even if the room in which he finds himself contains nothing but a couple 25-year-old white dudes, an iMac, and a cat. Then again, the guy certainly can talk, especially if you get him on the topic of superheroes or Star Wars.

Such concerns have always struck me as odd when expressed by a 35-year-old, as Gore was in the New Movie Show days. But from a man of 47, involved breakdowns of The Avengers or how George Lucas ruined The Phantom Menace verge on the grotesque. Reviewing that film, the New Yorker’s Anthony Lane, only three years Gore’s senior (and someone who tends to come up often in Podthoughts these days) wrote, “I dutifully thrilled to the earlier films, to their contrast of black-velvet skies and blinding white sands, but I was a little too old to worship them or study the varorium editions. Even in the late seventies, we had a suspicion that Star Wars was nerd territory.” And I think Gore would actually agree, having proudly branded himself a lifelong nerd in PodCRASH’s first episode. Not that I long to return to the days when any we’d swirly any kid caught reading an Asimov novel in the cafeteria, but I sometimes wonder if we’ve let nerd culture gain a little too much ground, especially that formerly held by cinema culture. I myself originally moved to Los Angeles for the filmgoing but admit to a weariness with the aggressive slovenliness of this town’s filmgoers, compared to whom the T-shirt-clad Gore has the wardrobe of Luciano Barbera.

Lane elsewhere wrote about “a period when adventurous moviegoing was part of the agreed cultural duty, when the duty itself was more of a trip than a drag, and when a reviewer could, in the interests of cross-reference, mention the names ‘Dreyer’ or ‘Vigo’ without being accused of simply dropping them for show.” Then: “That time has gone.” Whether or not Gore has made a similar lament, I do suspect that visions of capes and lightsabers have not wholly colonized his head. I also suspect that he created PodCRASH in part out of a fear that his past decade or so in the media had reduced his personality to a narrow band of opinion on the capes and the lightsabers. Ironically, quite a few of the other podcasts on which he appears demand more — sometimes much more — of the same, but some let him speak on very different subjects. (Sex stuff, for instance.) Though Gore’s professional life has placed him well to pull off the podcast-of-podcasts form, I can think of a few others I’d like to hear try it. DC Pierson, for instance, whom I brought on my own show, Notebook on Cities and Culture, after hearing on a dozen others, has risen as part of a younger generation who didn’t have to get defined by time in the deep-cable trenches. So hey, Chris Gore, if you’re reading, come on Notebook for a conversation. You’ve said you want to talk about subjects other than movies. You’ve said you live near Koreatown, where I do. Let’s make this happen.