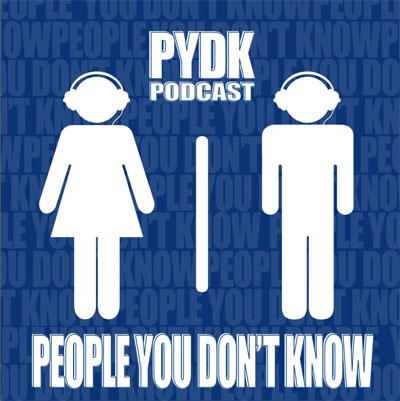 A listener once called Adam Carolla’s podcast asking how to go about booking famous guests on his own. Adam advised the young man to forget it, since (a) famous people already have plenty of venues into which to drop and, more importantly, (b) famous ≠ interesting. He suggested that the caller instead produce an “everyman podcast” featuring conversations with people who do all sorts of normal jobs. Immediately, your Podthinker sensed extreme potential; potential that, sadly, he already produces too many of his own podcasts to capitalize on, but potential nonetheless. Though a true everyman podcast has yet to pop up, The People You Don’t Know [iTunes] [RSS] comes tantalizingly close.

In each episode, lawyer/podcaster Eugene Ahn gets a couple people on the line — typically of the Skype or telephone variety — and chats with them about what they do and how they got to do it. These people have included Devindra Hardawar of The /Filmcast [MP3], violinist-turned-beatmaster Taka Yasuzawa [MP3], Instant Encore founder Margo Drakos [MP3] and My New Fighting Technique is Unstoppable mastermind and/or avowed left-wing polemicist David Rees [MP3]. Ahn bundles these conversations into shows with themes like “Community Spirit” [MP3], “Culture Shock” [MP3] and “TV and Cereal” [MP3].

Make no mistake: this is one slickly-produced podcast. In many ways, it’s assembled more like a “real” radio show, what with the themes and the music beds and the introductions and the sound-collage intro and the occasional clip shows and all. And your Podthinker has never failed to learn at least something from each interview. But it must be said that the program hits its absolute best with its least-known guests: People You Don’t Know, maybe not surprisingly, plays better with the people you really don’t know, those who perform more local functions or who have never before fallen under the harsh eyes of the media. While the show never quite hangs in the “everyman podcast” end of the spectrum, it does spotlight the occasional entreprenurial attorney, community organizer or investment banker/ex-Korean soldier — people we might never otherwise hear of. That’s the podcast at its best.

Which is not to say that it’s bad, exactly, when featuring better-known comic artists, podcasters, bloggers and suchlike; it’s just better with the under-the-radars. The same goes for The People You Don’t Know‘s geekier side, which has been getting indulged quite often lately. The show works well — and very well indeed — at high values of both guest randomness and guest unknownness. Your Podthinker wants not to be able to predict who’s going to show up next, or the type of job that person does. Ideally, listeners would never before have met anyone who does what that person does. (More ideally, one occupation wouldn’t come up twice. “Blogger” counts as an occupation.) The most fascinating of Ahn’s guests have, broadly speaking, called upon their own particular potential to do something unusual and intriguing. The show itself does much the same, though there’s plenty of room to do more of it.