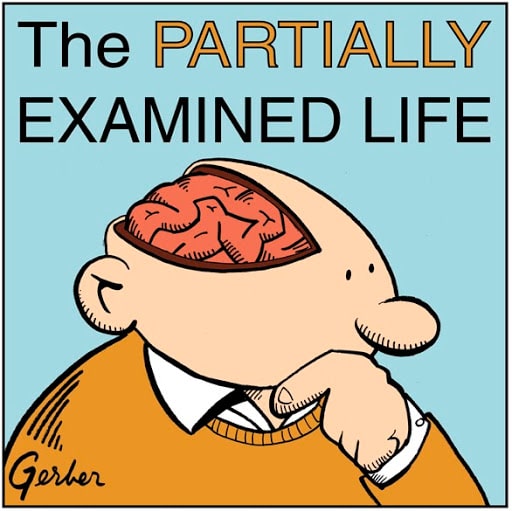 Take it as a heartening by-product of the march of technology or a sad sign o’ the socially atomized times, but podcasting has caught on by offering the lively, informed conversations to which listeners have lost real-life access. Sure, podcasting replaces it with only partial access, the kind that lets you listen all you please without meaningfully contributing, but whatever your area of enthusiasm, you can probably find a dozen long-running podcast discussions going on about it right now. In the same way a show like Battleship Pretension (reviewed by esteemed predecessor Ian Brill here) states its aim to conduct the kind of wisecracking, bullshitting, yet subject-engaged and intellectually fired-up conversations film students have, The Partially Examined Life [RSS] [iTunes] wants to re-create the atmosphere that arises when a few friends get together over a pitcher of beer after a philosophy seminar.

The show’s hosts know that environment well, having met as graduate students in the University of Texas at Austin’s philosophy department. But they didn’t stick around; having each ditched philosophy years ago to go his own way — to cities like Madison and Boston — they now reunite over Skype to revisit classic philosophical texts as non-required reading. You might call it a philosophy “book club”: they’ll convene to discuss Descartes’ Meditations [MP3] on one day, Nietzsche’s Genealogy of Morals [MP3] on another, Montaigne’s Essays [MP3] on another. Read the texts yourself in advance, and you’re effectively playing the home game.

Not that you absolutely need to. The podcast’s three self-imposed rules dictate that (1) the hosts shall not assume any knowledge of the text on the part of the audience, (2) the hosts shall make arguments directly rather than simply citing the arguments of other philosophers, and (3) the hosts shall maintain as high a standard of rigor and exactitude as entertainment value allows. While these rules theoretically make for maximum accessibility for anyone interested in tuning in, I imagine they also render the resulting conversations less, not more, like what you’d overhear from a huddle of T.A.s taking a break from grading at the university pub. Not that you’ll long for the fog of inside-baseball name-dropping or laments over undergraduate sloth, but The Partially Examined Life’s discussions take on a more straitlaced form than its attitude would have you expect.

I’ll venture to say that you’ll need to pay closer, more constant attention to this show than you would to anything said in a college-town tavern or graduate lounge. While the hosts often begin episodes navigating by some broad question relevant to the text at hand — “What can we know?”, “What is justice?” — they tend eventually to get into three-way exegeses. This turns trickier in philosophy-geek conversations that it does in, say, film-geek discussions. People have a pretty consistent innate understanding of what film is, but what, to put as philosophically as possible, is philosophy? I personally navigate the cultural world by considering philosophy to be the practice of describing how we think, communicate, and experience as clearly and as precisely as possible using natural language.

Therein lies the trouble — or, if you prefer, the joy. At least three hosts at a time trying to interpret, in their own natural and thus imprecise language, a philosophical text itself composed in its own natural and thus imprecise language, opens up infinite opportunity for purely semantic argument. The show’s discussions, as with so many philosophical discussions in life, sometimes careen inexorably toward thickets of seemingly endless loops circling around what the words being used could or should mean. (See the episodes on Wittgenstein [MP3] [MP3], though that should surprise absolutely nobody with philosophy-geek bona fides.)

Don’t feel too bad if you lose the thread — especially if you listen, as I do, while performing entirely non-philosophical database work. But you’ll find fascination and even intellectual beauty in hearing human minds collectively grapple with concepts even as the concepts crumble under scrutiny. The hosts’ lives since dropping out of U of T seem to have imbued them with the distance needed to laugh at this, and even to avoid it entirely now and then. Their conversations illustrate both why philosophy remains compelling despite all this, and why they felt the need to get while the gettin’ was good.