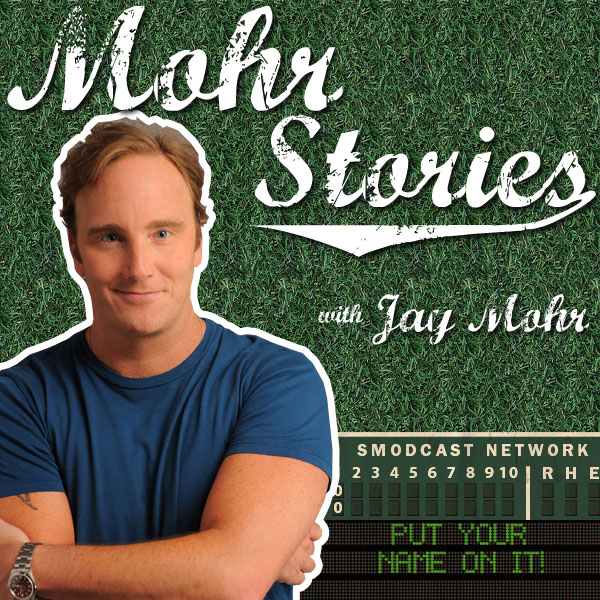 It must speak to the weirdness of celebrity in our time that I’ve long known of Jay Mohr without knowing him from anything. Saturday Night Live claimed him as a performer for a little while, but I’ve never watched it. I remember seeing him in promos for a show called Action back in I think 1999 which looked neat, but mostly because Illeana Douglas’ eyes seem to follow you no matter where you stand in the room. But the dude’s got a mile-long IMDb page! He had his own big-time sitcom recently! He played some sort of sleazy fellow in Jerry Maguire!

I’ve learned a lot about all these elements of Jay Mohr’s career — and heard the promise of learning much more — from listening to the first five episodes of his joyfully conducted new podcast Mohr Stories [RSS] [iTunes]. Something tells me I wouldn’t have if I’d been following Jay Mohr-related buzz just a little more closely. He’s taken a beating lately, or so I gather from the talk on his show, for everything from his newly chunky weight to JPEGs of his wife’s oddly plastic-surgerized lips. No matter the work he puts into his comedy, a lot of comedy fans seem to write him off. Not long ago, Adam Carolla asked him the million-dollar-preventing question point-blank: why doesn’t anybody want to admit Jay Mohr is funny?

“I used to be a huge asshole,” Mohr said, and he says it again and again on Mohr Stories. If you believe his claims, he’s dedicated his show to pure honesty about his life and career, and even if I don’t know his career, I can always get down to hear anyone being completely upfront about anything. Mohr drops this honesty in the comfort of his own garage, surrounded by friends, fellow comics, his wife, his baby, and even his longtime manager. I won’t pretend they don’t spend lengthy stretches of the hour-and-a-half to two-hour episodes goofing around, but when they get into the nuts and bolts of the business of making people laugh — and the wider business of working with people who make people laugh — they reveal details I’ve heard nowhere else.

Sure, some of these details amount to nothing more than ways to trick the opener traveling the road with you to unsuspectingly gaze upon your exposed anus. (Mohr explains it better than I can.) Other times, he and his coterie talk about the intricate dynamics between a performer, his management, and the wider world, or the complicated and chancy means by which a young comic rises in The Industry. Still other times, he discusses how he came into possession of a story about smoking PCP with Tracy Morgan, how he gained that weight, what it’s like to work with Tom Cruise (“the sun,” Mohr calls him, though he also calls Chris Farley that), or how, exactly, Bobcat Goldthwait broke up with Mohr’s wife before she was Mohr’s wife. (Still no word on those lip injections, though.)

Given my lack of experience in the realm of comedy, I found special fascination in Mohr and co.’s disquisition on the specific joys of performing for black audiences [MP3]. They even go over all the intricate levels of black-people applause, some of which involve grabbing and shaking anyone close at hand, and others of which involve getting out of their seats and doing laps around the theater. Wait, should I call this racist? Should I call Mohr’s impressions of Tracy Morgan racist, even though I laugh at all of them? (But I assure you I laugh at the satire of Morgan’s spacily emphatic manner of speech, not his race.) Should I call the oft-recurring joke about what Florida black families sound like at the beach racist? (But I laugh reflexively at every joke containing the word “kingfish!”) Even Mohr himself has instituted a Mohr Stories drinking game whose sole rule dictates that you drink whenever a white guy does an impression of a black guy. I can’t actually tell what, if any racism all this involves, but I feel a little bad about how I feel bad about how I don’t feel all that bad about it.

(Man, all those cultural studies classes in college messed me up.)