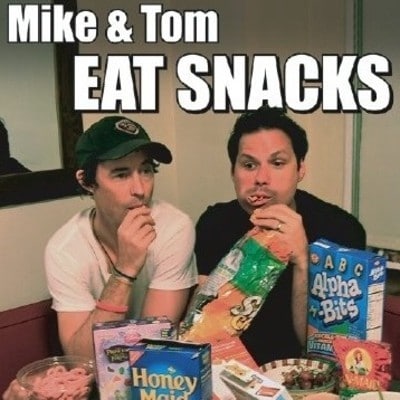 What podcast should I review on Podthoughts this week? Open to all suggestions, except those involving “pop culture” or two dudes yammering.

In rapid response came suggestions of one show compulsively concerned with pop culture and another composed of, yes, the yammering of two dudes. These dudes, comedians Michael Ian Black and Tom Cavanagh, host Mike and Tom Eat Snacks [iTunes], or, if you prefer, MATES. But here’s the thing: they don’t just yammer; they chew. They eat snacks. Mike and Tom eat snacks.

At first, I didn’t hear much promise in that either. As a comedic ignoramus, I’d never heard of Cavanagh — he seems to have acted in Yogi Bear — but I remembered a couple distant media scrapes with Black. My irritation at the him-voiced Pets.com sock puppet (“Because pets can’t drive”) singing “Spinning Wheel” still burns, over a decade later, though time has cooled it a bit. I mainly associate him with an appearance on one of those VH1 shows about the eighties, on which he’s evidently made a whole mini-career out of turning up. I tuned in knowing they would talk about the Delorean DMC-12, one of my favorite automobiles. At the end of the segment, Black said something about John Delorean snorting too much of the “cocaína.” He used a really cartoonish South American-type pronunciation, but just on that one word. I could never figure out why.

As I foresaw from it hours of nothing but “Spinning Wheel”, cocaína, and Ranger Smith, this podcast could only pleasantly surprise me. I keep my expectations low for any show that could easily devolve into just one more TTWGBAC (Two Twenty/Thirtysomething White Guys/Girls Bullshitting About Culture) atop the heaping pile, but Black and Cavanagh turn out to use a couple of ingeniously, near-stupidly simple tactic to ward off the evils of that genre. First, though perhaps not by design, one host has reached his forties and the other has nearly gotten there. Second, they assign themselves a task, give themselves something to do, besides ridicule the coming Footloose remake: they have to eat snacks.

On each episode, Black and Cavanagh eat, react to, and evaluate Combos, cocktail peanuts, Blueberry Muffins, what have the snack aisle. They take their snacking seriously, or at least as seriously as you can take anything when two-thirds of the sentences you speak about it sound purely ironic. (Here we have another example of the relatively venerable podcasting tradition of Ridiculousness Uttered Flatly.) They discuss whether one particular manufacturer’s example of a snack can or should act as a representative of that snack. They get into such directly snack-related debates as whether the set “chips” contains the set “pretzels,” or if they share nothing. They slowly realize that, the more rigidly you try to define the boundaries of the concept “snack,” the less of a division you perceive between snack foods and all other foods.

Wine lovers consider favorite beverage as a nexus of subjects, offering gateways into discussions of subjects as various as history, geography, aesthetics, business, and botany. Black and Cavanagh seem to feel the same way about pizza-flavored crackers. Though their tangential discussions take them through exercise regimens, Canadian identity, life in the entertainment industry, and the Footloose remake, the hosts always return to the snack at hand. It anchors them. It’s just like in meditation, when your mind inevitably wanders from the object of focus; you just guide it back, leaving your practice none the worse for wear. When such freeform podcasts lose their anchor — or, more likely, never bother getting one — they lose their way. As long as Mike and Tom keep Eating Snacks, they’ll retain their compass.