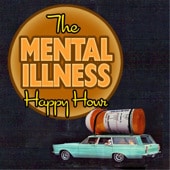 You hear cracks about how only the mentally ill would seek a fame-propelled career: in movies, in broadcasting, in writing, in the media, in comedy, in what have you. I’ve chuckled at these before, but always in a hollow, not-quite-comprehending kind of way. Most of the people I admire, after all, have these careers, and lacking any directly marketable skills, I have no hope but to obtain one myself. Sure, given greater sanity, maybe we’d land steady jobs as systems analysts and build stable family lives or something. But c’mon — can we all really suffer from malfunctioning brains?

Listening to Paul Gilmartin’s Mental Illness Happy Hour [RSS] [iTunes], I get the sense that… maybe we do, though to varying degrees. Gilmartin himself seems to have endured an especially nasty streak of mental illness; I don’t know the full story, but he hints at troubling enough aspects of it in this show that maybe I’d rather not get the whole picture. He certainly didn’t reveal it on Dinner and a Movie, the film-with-interstitial-cooking program he hosted from 1996 until nowish on TBS. I remember enjoying it as a kid, but I had no idea the man showing me how to prepare a Short Circuit-themed casserole struggled with such fiery personal demons.

The freedom to lead a less Road House chicken bake-oriented life has, for Gilmartin, meant the freedom to come forward about mental health, his own and others’. Running The Mental Illness Happy Hour as a straightfoward interview show, he brings on friends and acquaintances from “The Industry”, broadly defined, to talk about how they’ve coped with the conditions afflicting themselves and those close to them. Having built his career on speaking comedically about his many issues, Marc Maron makes an appearance [M4A] that, while you’d perhaps expect it, turns out no less rich and funny for it. When Gilmartin talks to Adam Carolla [MP3], he asks not just about the’ crushing depression of Carolla’s hippie parents, a fount of stories belovedly familiar to all Carolla fans, but his own illness/superpower of “hypervigilance” as well.

In fact, if we can go by this show’s first eight episodes, mental illness affects most high-profile members of the comedy podcasting community, or at least enough people near them that they can talk incisively about it. Jimmy Pardo [M4A], for instance, would seem like the picture of mental health. And he may be, but that doesn’t stop he and Gilmartin from digging deep into the motivations that can simultaneously fire up and shut down a comedian. Battleship Pretension (esteemed predecessor Ian Brill’s review here) host Tyler Smith [M4A] has a conversation with Gilmartin about his depression that both reveals specifics the condition I didn’t know about and lays out certain details that feel discomfitingly familiar to me. All that self-loathing… that’s — that’s not normal?

Gilmartin has points to make with The Mental Illness Happy Hour, but he comes right out and makes them explicitly, and they don’t seem particularly bothersome, as points go. I mainly notice him making the point that, if you think you need some meds, see a professional about getting some meds. I have no skin in this psychopharmacological argument, but his viewpoint seems sound. More broadly, he announces on the regular his one main Michael Jacksonian message to the listener: “You are not alone.”

This strikes me as healthy, whatever the context; if I suffered from full-blown depression, compulsive competitiveness, bad parenting cycles, anxiety, panic attacks, or hypervigilance, I’d rejoice at hearing from successful people who’d labored under the very same crap. As it is, I recognize elements of my own tics, twitches, and unhelpful impulses in Gilmartin and his guests’ bigger problems, and I’m glad I do. You could treat this as a plain old interview program featuring more-personal-than-usual examinations of all your favorite podcast-y and comedy types, but you’ll get much more out of it if you face the fact that, hey, we’re all at least a little mentally ill.