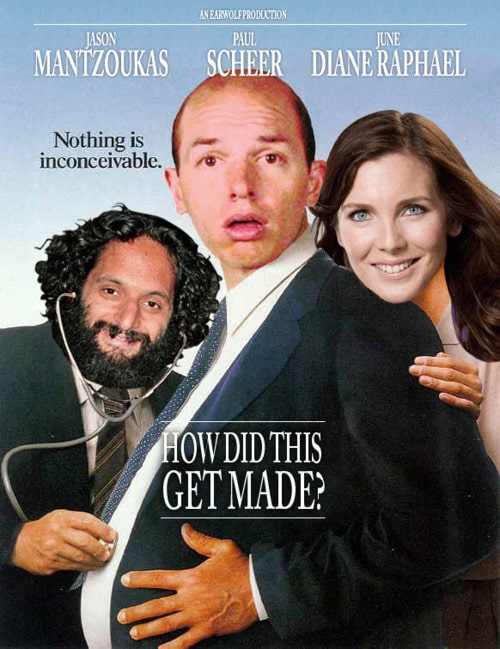 Vital stats:
Format: discussion of the various unbelievabilities of non-respected movies with comedians — and sometimes the filmmakers themselves
Episode duration: 35m-1h30m
Frequency: biweekly (with previews on the weeks between)

When I grew old enough to watch, I began watching films. When I grew old enough to read, I began reading film criticism. I’ve never slowed in either pursuit, but only lately have I realized that I don’t care if a movie is “good” or “bad.” By that I mean not only that it doesn’t matter to me if a critic, even one I read religiously, thinks a movie is good or bad — I figured that out first — but that it doesn’t matter to me if I think a movie is good or bad. We build no more rickety structures than opinions, instinctively slapping them together in the heat of the moment on foundations of shifting sand. Thumbing a picture up or down may make for a satisfying declaration of self — “I feel this way about this movie, and moreover, I exist!” — but I need to hear more. I long to discuss film as an experience, not as a mere object of acceptance or rejection — and I suspect, on some level, that you do too.

How Did This Get Made? [RSS] [iTunes] keys into that desire, though it doesn’t announce its mission in quite those words. “Have you ever watched a movie so terrible, so unwatchable, that it actually is amazing?” its iTunes description asks. Admittedly, that question alone hardly gets my blood flowing; I felt forced long ago to, in the manner of Dave Erdman, abandon enthusiasm for the intellectual and aesthetic dead end of the so-bad-it’s-good. But I didn’t replace it with undivided pursuit of “the good,” since, when I try to get my mind around it to define it, the concept disperses like smoke. I began to conceive of all cinema as a circle, with the movies people call “good” and the movies people call “bad” meeting at one particularly fascinating point. I downloaded a slew of this podcast’s episodes when I heard Patton Oswalt, in a guest appearance on How Was Your Week?, tell Julie Klausner that its crew doesn’t just bitch and moan about movies they don’t like; they treat their widely reviled subjects as sources of interestingness equal to their most respected brethren.

This crew, by the way, comprises comedians Paul Scheer, June Diane Raphael, and Jason Mantzoukas (who, we are often told, is not on Twitter). They watch recent and recent-ish releases like Sucker Punch, Gigli, and Battlefield Earth, movies whose box-office performances vary but around all of whom the stink of failure hangs heavily. They sometimes discuss them with comedy-type guests like Matt Walsh [MP3], Paul Rust [MP3], and Maximum Fun’s own Jordan Morris [MP3]. In a series of clever coups for a show not about to dole out praise, they occasionally bring in guests involved in the production of the fortnight’s film, like Greg Sestero, co-star and jack-of-all-trades on Tommy Wiseau’s immortal The Room [MP3] or — wait for it — the star of Cool as Ice, the one and only Vanilla Ice [MP3]. (For the last fifteen minutes of the episode, anyway.)

The talk with involved parties, a raid on the store of curiosity-satiating behind-the-scenes details they possess, highlights the best instincts driving How Did This Get Made? While certain films feel distant and thus somehow malevolently shoddy, reducing the panel to bouts of angered dismissal — Battlefield Earth comes back to mind — others provoke a richer question: no, really — how did this get made? The conversations usually revolve around what the Internet kids call “WTF moments”: the inexplicable events, actions, and creative choices these selections offer in spades. The show’s most memorable times come when Scheer, Raphael, Mantzoukas, and guests don’t just point and gawp in astonishment but genuinely try to figure out what they’ve seen, why they’ve seen it, and how it came to be seeable in the first place. Some of these questions have no answers. Perhaps none do, but grappling with them casts light on so much about how movies work and how different viewers engage with them in different ways.

But I don’t want to make this sound too heady. How Did This Get Made? adheres to several old showbiz commandments like the one about leavin’ ’em wantin’ more, which it does by usually ending on or before the 45-minute mark, and the one about keepin’ it light, which it does with invitations for the listeners to submit Love Guru character names of their own invention. I don’t know if Vaudeville had anything to say about reading aloud Amazon.com reviews by the semi-literate, but if it did, Scheer and co., with their recurring segment “Second Opinions,” have pulled off a hat trick. Yet I would submit that they ignore the cinematic brain trust of Netflix user-reviewers at their peril. About Ran, for instance, one Netflicker lamented that “there was too many horsehoof beats.” Not that any Kurosawa film would ever land on the chopping block of a show like this. But it makes you wonder: wouldn’t a movie podcaster face the greatest of challenge of all not in actively watching and discussing not the Sucker Punches of the world, nor the Rans, but the vast desert of apparent unremarkability between? CineMediocrity: one of you, please, take this idea and run with it. If you can bear it.