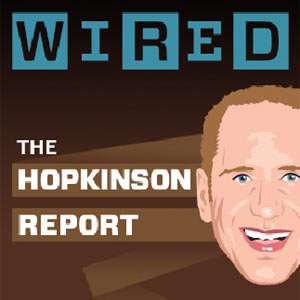 So I hear this “social media” stuff is pretty big these days. Specifically, I hear it from The Hopkinson Report [RSS] [iTunes], a more or less weekly audio dispatch from Jim Hopkinson, Wired magazine’s “marketing guy.” Having recently picked up marketing and advertising as intellectual interests (read: I realized I couldn’t market or advertise myself to save my life), I soon got Hopkinson and his Report as a recommendation.

It’s a pretty damned lively show. Hopkinson speaks at a rapid clip, almost like a more self-aware but no less enthusiastic infomercial host. Given the time constraint on each episode, his speaking speed would seem to come by necessity. He’s not pressed into John Moschitta territory or anything, but most of his shows clock in around fifteen minutes on average. Most of the time, he just takes a marketing technology, trend, question, or case study and riffs on it. There are occasional welcome longer-form episodes — interviews with authors and other sorts of creators — but there are three things us kids value above all in our media: brevity, brevity, and more brevity.

Again, that’s just something I’ve inferred from listening to the program itself. I’m glad I approach Podthinkable podcasts by simply plunging in, because if I’d read the episode titles in advance, I would’ve developed serious, itchy reservations. “4 Important Video Trends Worth Watching”. “5 Reasons You Should be Using a Twitter Client”. “Four steps to riding a viral video wave — Recognize, Hypothesize, Capitalize, Monetize”. “Social Media is the New Rock and Roll”. I keep washing and washing, but the dirt won’t come off. The dirt won’t come off.

Let me emphasize that, despite what those titles might imply, this is not a loathsome show. It actually delivers useful payloads with surprising frequency; it’s just that they’re often encased in those hokey shells. Hopkinson has some solid advice about résumés, for instance [MP3], although I think he neglected to mention how rarely the really cool work out there to do doesn’t ask for résumés at all. And he’s been in the technology game long enough that he can bring an interestingly wide perspective to certain trends, comparing what’s going on now to what went on in the eighties and early nineties.

As marketing podcasts go, I doubt The Hopkinson Report will unseat, say, CBC’s The Age of Persuasion (which may or may not turn out to have a secret podcast feed if you Google around) in my favorites list any time soon. This might just be because I’ve never felt entirely comfortable in my own era and generation. Sure, I’m on Twitter, I grasp the usefulness of Twitter, and I know how big Twitter is, but I still feel more than a little weirded out when listening to anything about “how to write great tweets.” I’ll stick to my sweater vests, the CBC, and Jim Hopkinson’s conversations with interesting self-marketers and his observations about Japanese toilets. You kids run along and turn your videos viral.