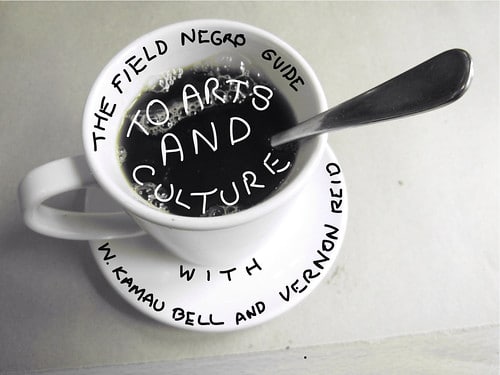 Am I even allowed to review this podcast? When Max Funster Andreas “Duus” Pape — “mentioned at Min 30 sec 41 of Episode 162 of JJGO,” according to his e-mail signature — suggested I Podthink about The Field Negro Guide to Arts and Culture, my first impulse objected on grounds of my lack of qualifications: “But that’s not for white people!” My second impulse revealed the silliness of the first one. “Think of all the nerd-stuff podcasts you’ve written up,” it said. “If you can listen to two hours of discussion on Ringworld, you can damn well listen to a podcast with Negro in its title.”

It helps that this particular podcast with Negro in its title comes from two of the most likable fellows I’ve ever heard speak through an RSS feed. I already suspected I liked one of its co-hosts, comedian W. Kamau Bell, after hearing his JJGO appearance, which included a discussion of this very podcast in which Jesse brought up, with astonishment, the identity of its other co-host: Vernon Reid, guitarist, founding member, and “main guy” of the band Living Colour. As often as I deride the dominant podcasting format of Two Twenty/Thirtysomething Guys Bullshitting About Culture, hearing One Presumably Thirtysomething Black Comedian and and One Fiftysomething Black Rock Star Bullshitting About Culture comes as a veritable breath of fresh air.

Despite the early reservations about my suitability to review Bell and Reid’s program, I don’t actually buy the idea of a sharp cultural divide between “stuff for white people” and “stuff for black people.” I wondered if The Field Negro Guide would insist upon such a divide, but it actually does its part to muddle things up. Some think of space operas and comic books as white people-oriented, but damned if Bell and Reid don’t get into deep discussions of Star Wars and Spider-Man. Some think of rock music as white people-oriented, but damned if Living Colour isn’t a rock band and, if I can go by what I’ve heard from them, one hell of a rock band.

A career like Reid’s naturally generates all kinds of gripping stories — hopping on a plane moments after a show to secretly play on Mariah Carey’s debut album comes to mind — but so, even with fewer years racked up, does a career like Bell’s. For my money, their best moments come when comparing notes about the nature of performative careers, coming at performance as they do from two different angles. I’d normally prefer this, with infinite vastness, to analyses of Batman, but Bell and Reid at least do them with enough intelligence that the subject matter almost becomes irrelevant. You might expect this degree of sharpness from Bell, but Reid’s oratorial bombs impress me even more. I mean, who expects guitar geniuses to do just as well verbally? How did he find the time?

None of this is to say that these guys don’t get racial, especially as pertains to black presidents and black rock bands. All well and good, since I consider U.S. politics a branch of space opera anyway and, without the super-sized episode of Fishbone [MP3], I wouldn’t know much about Fishbone. I mostly just don’t understand a lot of it. I get what black is and what white is and all that, broadly speaking, but I find too few commonalities within those vast swaths of humanity for claims about “black people” and “white people” to resonate with me. So I wind up not feeling racial anxiety about all this, but anxiety about my absence of racial anxiety. (And if that reasoning seems tortured, wait until you see me review the other podcast “Duus” suggested.)