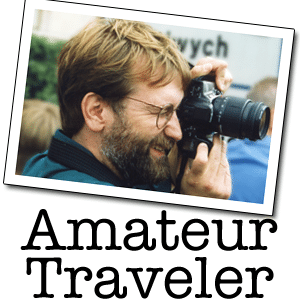 I can’t close the Kayak tab open as I write this. Interpret that as a testament to the power of The Amateur Traveler Travel Podcast [RSS] [iTunes], which, despite that title whose ungainliness I only now realize, stokes the trav’lin fires in (I assume) all who listen. In my case, it helped that the show’s archive of hundreds of episodes happened to offer one or more about everywhere I want to go, be it Mexico City [MP3], Seoul [MP3], Iceland [MP3], or Ethiopia [MP3]. I’m packed. Let’s do this.

But that’s not to call it an exoticist’s podcast. It first favorably struck me that the episodes on my well-la-de-da destinations listed above stood shoulder-to-shoulder with explorations of places that a regular old North American just might forget about, like Prince Edward Island [MP3], northern Ohio [MP3], and Wisconsin [MP3]. I smiled upon seeing a two-part special on Los Angeles [MP3] [MP3], my favorite (and most-visited) city of all. My enthusiasm for L.A. has reached such a strength that it barely took a ding when I listened to the episodes themselves, interviews with an L.A.- native (a) “social media expert” who (b) recommends the Sunset Strip, (c) makes no mention of Little Ethiopia or Koreatown, and (d) talks like he’s about to shove me into a wall of lockers.

Every episode of The Amateur Traveler takes the form of Skype interviews between host Chris Christensen and some resident of a place or a frequent visitor to that place, a format that works both to the good and to the ill. Episodes tend to stand or fall on the guests’ personalities: fantastic when they turn out to be engaging people with stories to tell, but less than fantastic when they don’t. Either way, they can’t expect help from the setup: despite coming off as a sharp, curious guy, Christensen uses a bewilderingly ineffective interviewing strategy.

Rarely do questions follow from the guest’s previous answer; base a drinking game on Christensen’s tendency to come back with nothing but “Okay,” “Interesting,” and/or a chuckle at your peril. Now, as an interviewer and an interviewing geek both, I labor under a hypersensitivity about interviewing principles, one of which dictates that you should aim to ask questions askable by nobody but you and answerable by nobody by your guest. Hard to think of a more flagrant violation than asking every single guest what surprised them about their place, what disappointed them about their place, what their favorite day in their place was like, what three words best describe their place, etc. These simplify the job, sure, but they also put up a thick barrier against genuine conversation.

Nevertheless, Christensen does a valuable service. You’d have to work hard not to learn from his podcast, and you’d have to work even harder to stop it from moving you to browse airfaires. The Amateur Traveler opens a window on the travel culture I so sorely yearn to join — I got my passport shamefully late, at almost 24, to go to Canada — but, like The Indie Travel Podcast, it also offers a glimpse at what looks to me like some habitual travelers’ bland unreflectiveness, which at times borders dangerously on nihilism. “I got to see one more cathedral,” goes the show’s theme song, “I got to sit in one more café.” But to what end? The travelers here get little time to go into their deeper reasons for doing what they do, mostly cleaving to talk of sights, food, and pure logistics, but perhaps listening to more of them will bring me to an understanding. This program certainly makes it easy to put in the hours.

[Podthinker Colin Marshall also happens to host and produce The Marketplace of Ideas [iTunes], a public radio show and podcast dedicated to in-depth cultural conversation that, this week, needs 198 new subscribers to survive the year.]