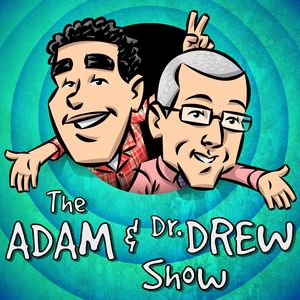 Vital stats:
Format: golden-age Loveline, more or less, but with fewer calls and more discussions of the breakdown of society
Episode duration: 45m-1h10m
Frequency: 8-9 per month

Mention this though I often do when writing about things Adam Carolla-related, I tuned in to Loveline throughout my adolescence with a near-religious dedication. Those nightly two hours with Carolla and “Dr. Drew Pinsky” on sex, drugs, medicine, home improvement, auto repair, and the state of the republic had formative effects I can’t possibly overstate. (They even taught me, broadcasting out of their decrepit Culver City studio, quite a bit about the geography of Los Angeles that would come in handy when I landed here myself.) Though ostensibly an advice show, and one that did sometimes spend a solid hour taking calls from stoned fifteen-year-old snowboarders worried about herpes, Loveline produced its most memorable gems of wisdom — not just about pills or booze or dental dams or plywood, but about life itself — with nobody on the phone, and nobody in the studio (certainly not from the gallery of “drunken rockers and stupid actresses,” as Carolla has since described the guest list) but its co-hosts. They admitted that they didn’t do the show for the callers, who half the time wouldn’t even pretend to accept their counsel, but the listeners. As one of those listeners, I can vouch for the benefits.

Like any nightly live show, especially one hosted by fellows busy even by celebrity standards, Loveline weathered the occasional absence: another doctor sitting in for Drew, another comedian for Adam. This taught us that, while either individual could hold their own, we tuned in for the combination, the pairing, the duo — the sum greater than the parts. The inquisitive, education-loving, clinically-minded, mild if sometimes twitchy Dr. Drew’s yin balanced the education-free, down-and-dirty/nuts-and-bolts, outwardly base but secretly incisive Adam’s everyman yang, making 1995 through 2005, the years between Carolla’s hiring as a co-host and his departure to helm a morning show on KLSX, the program’s near-official golden age. (Pinsky’s presence goes back to the early eighties, and continues to this day, alongside that of someone named Psycho Mike.) Apart from occasional guest appearances by Carolla on Loveline or Pinsky on Carolla’s radio show and, later, flagship podcast, 2005 through most of 2012, constituted lean years indeed for we who consider ourselves appreciators of Adam and appreciators of Dr. Drew, but out-and-out fans of Adam and Dr. Drew.

But then Carolla grew his podcast network, giving rise to the opportunity to replicate the old formula with The Adam and Dr. Drew Show [iTunes] [RSS]. Put on Carolla and Pinsky’s new podcast for just a few minutes, and your subconscious mind may well revert to its old Loveline listening patterns, so faithfully has it retained the format. The most obvious differences come from no longer laboring under commercial radio’s layers of infrastructure and management: nobody tells them they have to take a commercial break, nobody tells them they have to take calls, nobody tells them they have sit down with the guys from Oasis. They still do bring guests on once in a while, but only those they really want to talk to: a Jim Jeffries, a Jimmy Pardo, a David Alan Grier (or maybe Carolla’s kids). And they still take calls, though doing so has fallen to an even lower priority than it had in their days at what Carolla called Westwood None. But podcasting grants them the freedom to spend more time doing, at least to my mind, what they did best on Loveline: noticing something they find especially surprising, nonsensical or bothersome, then spinning it out into a much larger discussion about humanity: human foibles, human society, human nature. In the grains of sand they find working in entertainment, in medicine, and through everyday life, they see our world.

And what they see in our world, they don’t much like. Carolla has long traded on his proclivity for unhesitant and unrepentant fault-finding — “What Can’t Adam Complain About?” has become a semi-regular feature on his various shows over the years — but these days his talks with Pinsky almost immediately turn into detailed breakdowns of what ails America. This theme, the increasing doggedness with which they pursue it, and the tone of aggrieved lament that sometimes sets in, has, I sense, put off more than a few longtime fans. They may go so far as to dump good old Adam and Dr. Drew, now almost twenty years older and seemingly quite wealthier (though Carolla started from zero) than at the dawn of that Loveline’s golden age, into the “out-of-touch middle-aged white guys” box. I suppose it doesn’t help that, in the past decade, several prominent media figures who sing for their supper to the conservative crowd have treated Carolla as a fellow traveler, or at least as a crossover point. I have, at moments, thought of him as conservative, but only when I haven’t actually listened to him in a while.

Carolla has, I believe, called himself a libertarian, but neither does that label represent the contents of the jar; he may do endless variations on the a standard set of themes, but he doesn’t do them on the standard set of libertarian themes. The objections to Carolla, and to a lesser extent Carolla in dialogue with Pinsky, have less to do with their politics, I would submit, and more to do with our tendency to frame everything in political terms. The show’s conversations begin with complaints about passionfruit, ketchup packet design, energy drinks, participation trophies, the strange proliferation of service dogs, and they may well touch on public policy along the way, but they all wind up at the same destination: the grand slackening of America, the hemorrhaging from all our men, women, children, and institutions the quality they on one episode term “grit.” It goes back, in the context of The Adam and Dr. Drew Show, to the premiere, wherein Carolla brings up a banner he spotted at a high school: “Do the impossible: graduate.” Out of this morsel he makes a Christmas dinner of societal indictment, a j’accuse aimed at America’s pathetically withered expectations and the awesome bulk of its sloth.

As an entertainer, Carolla knows how to push his points as far as they can go. Pinsky, who still dutifully tempers this impulse with a well-placed nuance here and there, now also contributes a few criticisms of his own. (Having recently read Democracy in America, he occasionally cites Tocqueville in so doing.) We should note that Carolla himself spent decades never having technically graduated high school himself, and that both he and Pinsky display what some might consider a freakish compulsion to work as hard as possible, all the time, putting them at a vantage from which almost everyone (“except Richard Branson and Madonna,” Carolla has noted) must look lazy. Still, they both came of age in the seventies, this country’s last sustained period of fecklessness, reality denial, and gruesome footwear. They clearly fear that, in some sense, that time will return. I never lived through the seventies and have no inclination toward complaint, but I admit that Adam and Dr. Drew have got me a little afraid too. Despite having little faith in grand solutions, at least whenever I start to feel myself slacken, I can usually trust them to snap me, as a 28-year-old with an iPod just as they did to 13-year-old me with a radio, back into action.


[Podthinker Colin Marshall hosts and produces Notebook on Cities and Culture [iTunes] and writes essays on literature, film, cities, Asia, and aesthetics. He’s working on a book about Los Angeles, A Los Angeles Primer. Contact him at colinjmarshall at gmail or follow him on Twitter @colinmarshall.]