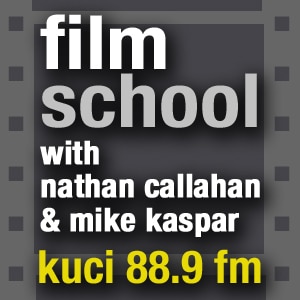 As noted here before, I’m an enthusiast of the cinema. Given my equal enthusiasm for podcasts, you’d think my iTunes subscription list would be loaded with movie-related shows; lord knows there are enough of them out there. Problem is, most film podcasts I sample — and here I’ve done more sampling than Gregg Gillis — fixate on the same topics: “Juno: Overrated or Very Overrated?”, “Let’s Talk All Seriously About a Superhero Adaptation”, “Something About Seth Rogen”. Maybe that’s your bag, but it sure ain’t mine, so I’ve spent a lot of time wandering through the harsh, unforgiving desert of flickcasts, searching in vain for a morsel of smart, engaging goodness flowering through the dry, dry movie-B.S. sand.

Fortunately, I’ve happened upon one such morsel. Now, it’s not perfect or anything, but you seem pretty cool, so I think you’ll like it. It’s called Filmschool [iTunes link], and it comes from a proud broadcasting tradition: University of California Radio. You already know two distinguished alumni: myself, from KCSB, UC Santa Barbara’s station, and of course Jesse, who developed The Sound on KZSC, UC Santa Cruz’s station. While Jesse came up with hard-unicycling hippies and I came up with hard-drinking surfers, Filmschool comes to you from the hard-studying, lowered-Acura-driving milieu of UC Irvine and its station, KUCI. (The station looks cool, though I didn’t even consider the school. For you non-Californians out there, the city of Irvine is actually a very large parking lot that, I believe, surrounds just one office building.)

So what does Filmschool get right that most cinemacasts flub up? It’s not sound quality; guests sometimes phone in from iffy, low-fidelity locations (e.g., Switzerland), and I could swear — though not wager any significant cash amount — that a few of the interviews have that telltale harsh Skype sound. And it’s not really the quality of the conversations; hosts Nathan Callahan and Mike Kaspar do a decent, workmanlike job, though sometimes a slightly awkward one. And it’s certainly not the editing; the show sounds sloppily cut together, with a Max Headroom-like cut-and-paste flow where words and sentences begin and/or end in midstream.

But the program makes up for everything with its guest selection, the Achilles’ heel of other reelcasts. Filmschool tends to eschew conversations with actors, which scores big points with me. I mean, you need actors to make movies and all, but they have so little to say — so little that you want to hear, anyway. And have you heard some of the wacky stuff actors believe? Tom Cruise is the tip of the iceberg, my friends. No, on this show, you get the truly fascinating men and women of film: the directors. And not just the ones who seemingly live at the press junket. Callahan and Kaspar talk to the very filmmakers that I want to hear from — and, if you’ve read this far, you want to hear from — such as Charles Burnett, auteur of the newly-rereleased 70s and 80s Los Angeles classics Killer of Sheep and My Brother’s Wedding [MP3]; prolific documentarian of American institutions like High School and Public Housing Frederick Wiseman [MP3]; grand old man of teen squalor Larry Clark [MP3] and today’s most brain-burstingly creative silent film visionary, Guy Maddin [MP3].

Filmschool may lack polish, sure, but few motionpicturecasts don’t. What’s important here is the content, and boy, have they got it. Show me another program that would bring on both revered Grey Gardens documentarian Albert Maysles [MP3] and Gen-X master of nihilistic, dead-eyed, gross-out anomie Harmony Korine [MP3] and I’ll stop insisting that this is just about the best thing going in talkiecasts. The only serious shortcoming is, well, the shortness; the interviews are about a quarter the length I’d like. But I suppose I’ve just got to deal with that, since the alternative seems to be the echo chamber of “Indiana Jones 4: Triumph or Travesty?”

[Reach freelance Podthinker Colin Marshall‘s secretary at colinjmarshall at gmail. Discuss Podthoughts here, or submit your podcast for the next by-Max-Funsters column here.]