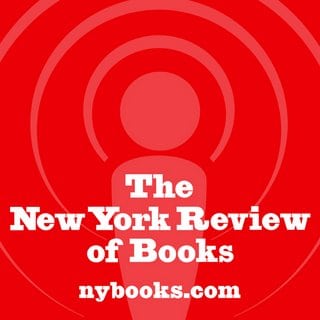 Under the monocle in this week’s Podthoughts is not a long-established podcast but a brand new venture. There are perils to early examination — the format or aesthetic of the program might not yet be fully formed, for instance — but none can deny the excitement of approaching a show still working through its experimental stages. The interest is heightened when, like the podcast in question today, it’s a product of a journalistic institution as august as the New York Review of Books.

Since its June debut, The New York Review of Books Podcast [iTunes link] has provided a little bit of this and a little bit of that. Things started out strong with two early conversational ‘casts on exquisitely fascinating subjects: Edmund White on the life of filmmaker Marguerite Duras [MP3] (nicely connected with his recent NYRB piece, “In Love with Duras“) and the delightfully-voiced Times Literary Supplement classics editor Mary Beard on Roman jokes [MP3]. Ultra-solid stuff, especially for a program then only two or three episodes old, which makes it all the more a shame that the conversations are so short. Only twenty minutes spent on the life and work of Duras? Really? Really, now?

Length issues aside, there’s been a reasonable serving of tasty meat on the NYRB Podcast‘s bones these last four months. True, it’s difficult to make a conversation with Oliver Sacks uninteresting, so it’s no surprise that his appearance [MP3] discussing his newly-paperbacked Musicophilia is a lot of fun. And as far as Edward Mendelson talking about [MP3] and reading from [MP3] the poetry of Frank O’Hara, I’m buyin’ what he’s sellin’. If he could report that this podcast delivers material of this caliber each and every week, your Podthinker would be a happy Podthinker indeed.

Alas, he cannot. There is a problem with the NYRB Podcast; unsurprisingly, it’s the same problem the New York Review of Books has in print, writ small and much more aurally. Evidently, the editorial board of the magazine will not rest until a certain number of otherwise pleasing articles are dragged into the unseemly muck of political territory. Your podthinker has, in other venues, repeatedly reached the conclusion that when it comes to the place of politics in art, it doesn’t have one. The Review believes differently; in fact, it appears convinced that, even when grand political speculation is inappropriate — which, roughly 99.9% of the time, it is — well, by gum, they’re going to hold the upper lips stiff and engage in it anyway.

This ethos engenders such groan-inducing installments of the podcast as Darryl Pickney on the loathsome proposition of someone voting for John McCain [MP3], something about Iraq [MP3] and Michael Chabon phoning in from the Democratic national convention (yes, really) [MP3]. This tendency gives a sour aftertaste to what’s otherwise a lively, fascinating cultural podcast. (Side note: the political episodes tend to be hosted by one Hugh Eakin, who sounds eerily like a slightly more weenieish Ira Glass. Separation at birth cannot be ruled out.)

Nevertheless, this Podthinker’s official verdict is, thus far, a cautiously favorable one. Assuming it can beat down its own political tics, the NYRB Podcast — and, let’s face it, the NYRB — could really make something more of itself. The conversation about reading between Pico Iyer, Daniel Mendelsohn and the inimitable James Wood [MP3], for instance, is one of the best hours of podcasting in years. Stay tuned.

[Podthinker Colin Marshall keeps his art in this jar, and his politics in this one. Get him at colinjmarshall at gmail, suggest podcasts for Podthoughts here or submit your own podcast for the next by-Max-Funsters column here.]