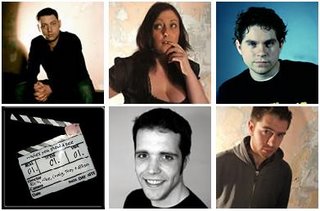 Podcasting, for whatever reason, has turned out to be a predominantly American (and sometimes Canadian) medium. Scrolling through the podcasts currently stored on one’s iPod, one generally finds hours upon hours of yammering American accents. Being American, that’s not something this Podthinker would normally notice — without, that is, having spent the previous week listening to the English film podcast Movies You Should See [iTunes link].

MYSS is a weekly conversation about film between Richard Smith, Allison Downing, Craig Bevan, Will Tristram, and Tristan Ofield — or at least most of them, given the normal absences — six English filmgoers with English accents, English sensibilities, English cursing vocabularies and what I assume are English preternatural cricket abilities, English stiff upper lipps and English senses of fair play. For the Yank, this requires some linguistic adaptation, since in England:

But this is nothing insurmountable for the U.S. listener willing to put in the hours. After the first few, Richard, Allison and the gang sound almost normal. What’s somewhat more difficult is distinguishing one voice from another. That’s always a problem with any newly-adopted group-discussion podcast, but the men here — Allison’s, the crew’s sole distaff element, is obviously easy to identify — sounds unusually similar.

Distinct voices, though, are less important in this type of enterprise than are distinct opinions. This is where MYSS really comes through. The panelists often refer to themselves as comprising an even representation of the full “spectrum” of cinema fandom, and nowhere in recent months has this been cast into greater relief than during their discussion of Bergman’s Hour of the Wolf [MP3]. Allison, Craig and Will seem to have settled on “magnificent” as an appropriate descriptor for the film, but then, out of his 45-minute silence, emerges Richard, asserting that the movie is actually pretentious, elitist and likely to alienate the majority of those who approach it. A scintillating discussion of the validity of the whole “art”-“entertainment” continuum ensues.

While not every talk is at the same level as the Hour of the Wolf exchange, it’s worth noting how nice it is that the vast majority of the episodes are solid discussions of similar lengths about individual pictures. Too many cultural podcasts don’t get it right in this department, opting instead to jump around from work to work. That’s not to impugn the very idea of jumping from work to work — the podcasters who do it well do it very well indeed — but it usually doesn’t create as substantial a listening experience as when the depth is cranked up and the breadth is cranked down.

The MYSS selection process keeps it varied: they dissect the movies everyone “knows” but not everyone has watched (like Costner’s Field of Dreams [MP3] and Wilder’s Some Like it Hot [MP3]), the gems one might not otherwise hear about (like Jun-Hwan Jang’s Save the Green Planet [MP3], which this Podthinker happens to have championed elsewhere) and the stuff everyone’s seen thrice (like The Matrix [MP3] and This is Spinal Tap [MP3]). Good on ya, mates. (That might be an Australian expression, but never mind.)

Vital stats:
Format: group film discussion
Running since: August 2005
Duration: 40m-1h30m
Frequency: weeklyish
Archive available on iTunes: roughly 1/3, and you have to pay for the rest

[Podthinker Colin Marshall is also against poor, ganged-up-on Richard when it comes to Hour of the Wolf; agree with him at colinjmarshall at gmail. Suggest a podcast for Podthoughts here, or submit your own podcast for the next by-Max-Funsters column here.]