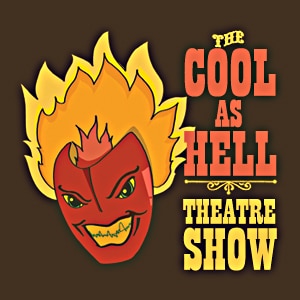 Loath as I am to admit this, dear Max Funsters, I dragged my feet a little on this one. Figuring it was high time to review a program covering the legitimate goings-on of the live stage, that theater of the mind and body, I picked a theater podcast. The Podthinker’s is a two phase job: first comes “listening”, then — and only then — comes “writing”. I kept trying to start the listening phase this time around, but kept stepping back. My fear? Drama geeks.

Cast your mind, if you can, back to high school. (If you’re currently in high school, great job.) Remember drama geeks? I hung tentatively around the edges of their scene, as it seemed to revolve around drama — onstage and off. From a safe distance, I watched them squabble, snipe, and — my hand casts about the air for the proper term — do each other. This goofy, Machiavellian, incestuous circle appeared to constitute the true drama geek’s entire world; I’m not sure they realized there was anything outside it. I feared a theater podcast would cater exclusively to such inner circles, dropping references to obscure one-acts and constantly delivering nerdily cutting swipes that I’d feel dirty for either understanding or not understanding. A real no-win sitchyation.

Given these and other psychodramas, it’s a miracle I ever hit the play button on The Cool as Hell Theatre [sic] Show [iTunes link] (or CASH, which acronym is, as it were, money). Evidently the creator, producer and host Michael Wayne Rice is a bit of a one-man show veteran, which I read as an additional danger sign. Now, I stopped watching Family Guy a long time ago, but when the show satirized one-man shows, it said it all:

Life sure was crazy growing up in Brooklyn. We had some real characters in my neighborhood, like Frank the Mailman. “Hey, Mark, the ants for your ant farm came today!” And my friend Lonny, that knucklehead. “Yo, Marky, let’s play some b-ball.” “B-ball.” That’s what we called it. B-ball. And my grandma. Boy! Was she something else!

So I’m fearful of anything to do with one-man shows that aren’t Mike Daisey monologues. Fortunately, Rice steers just about as far as you can get from self-indulgent theater weeniedom. The show comes straight out of the San Francisco Bay Yay Area, where Rice plays roving interviewer, traveling all over the place and recording conversations with the writers, directors and actors of new surprising, innovative, hard-hitting — I’m trying to get through this column without using the word “edgy” — new productions. He’s quite possibly the exact opposite of the aforementioned drama geek: laid back, animated without being show-offy, enthusiastic in all the right ways and eager to share the love with all the “ladies and gentlemen, boys and girls, pimps, players and hustlers of the theater world.” (Yes, direct quote.)

Rice chats with a wide range of today’s Yay Area theater-makers; the projects include a “re-imagining” of Alfred Jarry’s Ubu Roi with more thrown food [MP3], a white Jewish rapper’s adaptation of a Jewish novelist’s story of a fictitious white Jewish guy’s journey to rapperhood [MP3], the work of something called a “male feminist” [MP3] and, of course, the antics of the good old Reduced Shakespeare Company [MP3]. The steady format is as follows: first, the guest gets thirty seconds — no more, no less — to describe the show they’re putting on. Then Rice and the guest talk for a while. Then Rice demands that “all humility be sucked out of the room” and the guest sell their show hard. Roger Rees did that last bit the best: “Because I’m hot and my show could change your life.” [MP3]

Anyone who’s been to San Francisco knows that it’s a cool place, but they also know that it’s something of a double-edged sword: while the city is an absolute Large Hadron Collider of creative energy where one never quite knows what to expect even just walking down the street, it also doesn’t seem to realize when it’s become a parody of itself. (Good examples of this can even be found on the Board of Supervisors.) As with the city, so with its theater: listening to Cool as Hell, I found myself thinking I’d have to start hitting the skip button if one more guest started talking identity politics. Or any kind of politics, really, though I guess that’s what you’d expect from people who produce shows with names like Corporations Stole My Gender, Amerikkka and Something About Iraq. (Okay, so I made those last three up, but they’re not far from the truth.)

They don’t often get too far into that, though, due to another double-edged sword: the podcast’s extremely short length. At between seven and twenty minutes, the interviews don’t have the chance to run badly off the rails, but they still feel like they’ve ended before they’ve begun. Conversation is an art form that benefits from breathing room, and I’d recommend Rice and make use of that. Otherwise, nice job; I can feel my dramaphobia receding already.

Vital stats:
Format: theater-centric cultural interviews
Running since: June 2005
Duration: 7m-20m (!)
Frequency: just about weekly
Archive available on iTunes: only the fifteen most recent; the rest are on the site

[Freelance podthinker Colin Marshall once played Dean McCutcheon in “Quimby Comes Across”. Ask him about this experience at colinjmarshall at gmail. Discuss Podthoughts here, or submit your podcast for the next by-Max-Funsters column here.]