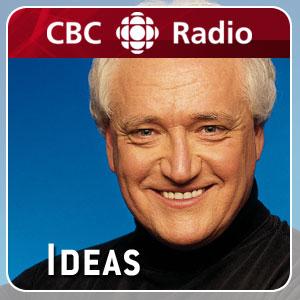 During a recent trip to Vancouver, your Podthinker strained to determine what, exactly, separates Canadian stuff from American stuff. Though no Canadian dares call their country “basically the U.S.”, the similarities vastly outnumber the differences, but it’s the differences that intrigue. In the Podthoughts on Vancouver’s Stop Podcasting Yourself, “civilizedly bland, sort of pleasantly inferior” was the phrase of choice, and perhaps it still applies. But upon reflection, it doesn’t quite capture all the nuances. To discover the true qualities of Canadian-ness, it’s necessary to go to the mothership, the juggernaut that is the Canadian Broadcasting Corporation, and more specifically, to its long-running program Ideas.

The miracle of podcasting has brought this 43-year-old pillar of Canadian radio to the rest of the Earth in the form of The Best of Ideas [iTunes link], which every Monday delivers one hour of the five-hour-a-week program straight into one’s Zunehole (or whatever). Through this show, an exploration of philosophy, technology, literature, science, art and society, one can identify the elements of the Canadian sensibility in microcosm.

First, Ideas is earnest. No matter the topic — Utopianism, quantum physics, the translation of literature — the program treats it as if it’s of the utmost importance. Joined with a surprisingly wide purview, it’s an admirable quality indeed, though it’s hard not to wonder if the producers really — really — care so deeply about all the subjects on which they touch. Your Podthinker would go so far as to submit that some of their topics don’t warrant earnestness: witness, for example, the four hours (!) Ideas blew on the maudlin, fanciful economic musings of Karl Polanyi.

Second, Ideas is dignified. The announcers’ tone, and especially that of host Paul Kennedy, sound like the very concept of standing up straight, as if the production department’s top priority is producing a clean, crisp and almost pressed sound and feel. This is respectable, though it sometimes results in stories that sound like dequirkified This American Life segments.

But third, Ideas doesn’t take itself too seriously. The kind of importance and propriety with which the show imbues its material is the same kind of importance and propriety one sees in Canada itself: clear and present, but not overblown. Like its motherland, Ideas seems to realize that it’s not exactly holding the fate of the world in its hands, which loosens things up and allows for a bit of experimentalism. But it also knows that you simply don’t leave the house in sweatpants.

Fourth, Ideas suffers from identity anxiety. While a solid majority of its concepts are as fascinating as they come, a good ten percent are non-starters. These duds often concern the question of Canadian identity, which appears to be a periodic national preoccupation. (On the grand list of humanity’s worries, the substance of Canadian identity would seem to rank rather low, though one has to wonder what does hold those provinces together.) Hand-wringing about multiculturalism also worms its way in every so often, and one three-parter on “the trouble with tolerance” was so ridiculous that your Podthinker has held it up as the ultimate example of mealy-mouthed, unproductive discussion ever since.

Fifth, Ideas takes its time, and that’s how the show shines brightest. Your Podthinker has heard no other radio program or podcast willing to devote the sort of length and depth to its topics that Ideas does. Two hours on Robert Weaver, the “godfather of Canadian Literature”? Four hours on historian Jocelyn Létourneau? Three hours on surveillance? All are allowed. Better yet, when Ideas runs an interview, it’s be a long-form conversation running at least 50 minutes. The other edge to this sword means that one must endure the occasional extended go-nowhere riff on tolerance of uncritical celebration of Polanyi’s crackpot ideas about the noble savage, but so be it.

[Podthinker Colin Marshall also likes those two-dollar coins they’ve got up north. Get him at colinjmarshall at gmail or discuss Podthoughts on the forum here. Submit your own podcast for the next by-Max-Funsters column here.]