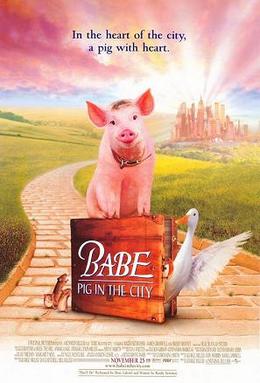 Scott Tobias of the AV Club has a thoughtful and informative piece in the AV Club this week about one of my all-time favorite films, “Babe: Pig in the City.”

“Pig in the City” is a lot like “The Wire,” in that it’s about flawed but mostly virtuous characters trapped in a world that seems to conspire against them — and that forces them to conspire against each other. Unlike “The Wire,” which has often been compared by its creator David Simon to a Greek tragedy, where the characters’ sense of agency is completely illusory, “Pig in the City” is a hopeful story. Because Babe believes in virtue and in the power of behaving virtuously, he’s able to overcome circumstance and bring together all of the scared, trod-upon animals in the Big City. And they win. They remain flawed, but by believing in themselves and each other and most importantly in being good, they win. And I cry every time and am inspired every time I watch the film.

Also: it is not too scary for children, who face the same problems every day and could really use the example that Babe offers. I know that both of my brothers — who were about 10 and 4 when the film came out — grew up loving this film and watching and rewatching it.