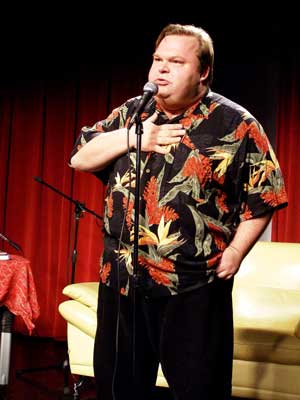 MaxFunPal Mike Daisey, last heard on our Live in NYC show a year and a half or so ago, has a brand new show. Given the title, “How Theater Failed America,” I’m guessing it has less severed limbs and blood-soaked snow than the story he told on our air, but it still sounds pretty great to me. I saw Mike, (who I have decided is the official Monologuist of MaximumFun.org), perform in LA a month or so ago, and he was just as hilarious and electrifying as he was in New York.

I’m not going to reprint all of Mike’s rave reviews, so let’s go with a favorite, from the New York Times: “A sardonic rebuke to the corporate types who hold American theater hostage and a powerful sense of the wonder of theater. The entire room was quietly rapt…a remarkable performer.”

Mike’s extended a special offer for MaxFunsters… use this direct link to the online box office, and use the code MDHTFA and you can get twenty dollar tickets to the show. That’s a hell of a price. And you can call 212-947-8844, use the same code, and get the same sweet sweet deal.

(Above photo: Mike at TSOYA Live, shot by Anya Garrett)