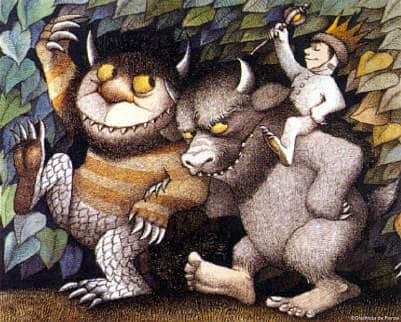 I read “A Heartbreaking Work of Staggering Genius” in college. I liked it, especially the parts that weren’t crushingly, overwhelmingly sad. The funny parts, for example. Loved those.

I think people who read more novels than I do are used to them being crushingly, overwhelmingly sad. I’m not, really, and it kind of fucked me up.

Then for a long time I didn’t read a bunch of Dave Eggers stuff. Frankly, I was worried it would be super sad. I can’t handle that shit.

But this… this is not sad. This is pretty much one of the greatest things in the history of the world.

You probably have heard that Eggers wrote the script for Spike Jonze’s film adaptation of Where the Wild Things Are. That’s pretty great. But did you know he also wrote a novel based on the screenplay?

A) Where the Wild Things Are is pretty much the greatest thing ever.
B) Dave Eggers can really kick out the jams when he wants to.

C) This is gonna be fucking great.

Also, last night, while my wife was doing the stuff ladies do before they go to bed (remove makeup? un-style hair?), I read this excerpt in The New Yorker, called “Max at Sea.” It’s fucking great and you should read it.

Additionally, there’s a lovely profile of Spike Jonze in the Times Magazine that was just put up on the website.