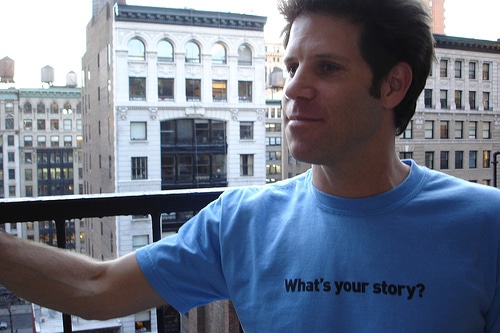 Larry Smith is a writer whose work has appeared in Salon, Slate, Popular Science, and Men’s Health. More importantly he’s the founding editor of SMITH Mag. A site entirely devoted to the art of storytelling and encourages you, the reader, to contribute. One of the many projects on the site is Six-Word Memoirs. It has been so successful that it has spawned a series of books. Not Quite What I Was Planning: Six-Word Memoirs is the first. There are more that 800 hundred contributions in one nice little package. Smith spoke to Chris Bowman about origins, community, and how a few words can lead to many.

Chris Bowman: First off the most obvious question, with Not Quite what I Was Planning: Six Word Memoirs, what were you planning?

Larry Smith: Originally we started SMITH magazine as a participatory populist story telling community in January 2006. The idea was for a place where people who may consider themselves writers could write all personal stories. We always wanted to be a community where we had some professional editors involved and it was curated. I mean give them story projects. My Life So Far is a personal essay or part of your memoir in progress. Brushes With Fame you’d write about meeting celebrities. My Ex…that kind of stuff. We have other projects like non-fiction web comics and Memoirville, where we do interviews with up-and-coming or even famous memoirists. And all of that was going fine. We started with no money, a lot of volunteer labor and sweat. In November 2006 we decided to try this six-word memoir idea. The idea came from Hemingway, who was once challenged in a bar bet to write a six-word short story, For Sale: Baby shoes, never worn. The idea of six-words has shown up in different literary circles over time but no one had done a six-word memoir. It makes perfect sense for our readers because we are a community of storytellers.

CB: It has been said in a few places that text messaging is the death of the English language. And recently I read an article that cites Twitter as one of the reasons people are losing the appreciation for the rhythm of language. What’s your opinion when it comes to the state of our language?

Click on “Read More” for more from Larry Smith

LS: It’s funny. I think pretty much the opposite. Teens are unbelievable. What they’ve done with six-words, both teens and adults, is amazing things with language. There are a couple of really wonderful moments on this SMITH magazine/ Six Word Memoir journey. One of them was that we had a live event on February 14th around the release of our Love and Heartbreak book. PostSecret and, Cassette From My Ex were there. All of these cool personal media projects got together to raise money for Housing Works, which is a homeless service organization. We all did our 15 minutes each on our projects, really fun stuff. Starlee Kine read, she’s on This American Life a lot. At the end of the event somebody came up to me, I didn’t know her. She’s in her early twenties maybe and she says, “You don’t know me, but I just wanted to say thank you for helping me start writing
again.” It was the six-words that was the catalyst that got her writing again. Six words is often just the start. The memoir, “After Harvard, had baby with crackhead,” is the first memoir in our first book, written by a woman named Robin Templeton. I ended up learning more about her story: she did have a baby with a drug addict, he actually died. Robin was at our book launch party in February 2008. Contributors came from all over the country and would introduce themselves by memoir (”I’m Marybeth, page 171, ‘Catholic girl. Jersey. It’s all true.'”). When the other contributors realized who Robin was, they all sort of came up to her to kiss the ring. They thanked her for her honesty and bravery, and they encouraged her to write more. Now Robin’s working on a full-length memoir about her life.

Teens that never thought they were writers, some of whom have written thousands of six-word memoirs. If you go on to the SMITH teens website it’s a madhouse. They come home every day and they write. Would they be writing in their journals ten years ago? Maybe? But we’ve made it so easy to do. We put it out publicly so you can see each other’s work. It’s not hidden under a bed. I think short form leads to longer form. Six-words gets people started, Twitter gets people thinking they are storytellers they didn’t think they were. I mean do we have a nation where more people are participating in media and personal media and storytelling than we did five years ago? Absolutely. I think this is an amazing time for the written word. I really do.

CB: As you said, the teens did pretty well when asked to sum up their life in six words. Did this surprise you?

LS: I’ve learned through three and a half years at SMITH that if you put the call out, you make your call clear and you get the word out a little bit, the response will always be awesome. So I kind of thought SMITH teens would work. The co-founder of SMITH, Tim Barkow, and I had a five minute conversation. “Should we make SMITH teens a little project for SMITH magazine or should we give them their own site?” We thought maybe they’d want their own site. Kids don’t always like to be in a room with adults. It was obviously totally the right way to do it ‘cause they have their own little world. They comment much more on each other’s memoirs, they post more images. They are really wonderful and supportive of each other. An incredible thing just took place on SMITH Teens. One member of the community made a birthday video for another member. What she did was have other SMITH teen members submit birthday wishes for her and she spliced them together. These kids are so good to each other. I’ve heard how kind teens are to each other again, and again, and we see it every day on SMITH Teens.

CB: Many of the entries in the six word memoirs series are very compelling. Have you ever been tempted to contact one of the contributors to explain their story in more detail?

LS: One of the interesting things about doing readings across the country is we invite anybody whose in the book to come up first and tell the story behind the story if they like or just read their memoir. But we’d get these back-stories that are amazing. We record a bunch of them and we have you tube play list up on the six-word area of the site. In the book that’s coming out in February we have a new thing that’s called random and selected back-stories, biographies and conversations. There are maybe twenty back-stories out of 800 memoirs. If you’re a purist, we totally respect that, just don’t read the appendix. But if you’re interested cruise back to the appendix. To put the back-story on the same page would have changed the experience. So we didn’t do that.

CB: So far there’s Six Word Memoirs, and Love and Heartbreak. What other themes do you have planned?

LS: We have a graphic novel called A.D.: New Orleans After the Deluge. We did serialized non-fiction stories for a little over a year. In fifteen parts we told the story of six people who survived hurricane Katrina. They’re real people and we have audio that supplements the comic. Pantheon will be publishing that in August. The teen six-word memoirs will be out in the fall. I’m pretty sure we’re going to do a six-word memoir mom book because moms write great memoirs about being moms or their relationship with their own mom. I think were going to do-and this isn’t inked with Harper Perennial-but I really want to do a six-words book on faith. I’m not particularly religious myself but I’m really moved by some of the stuff that came in. It helps you think differently. Those are on my hot list. The two things I really want to do.

CB: SMITH magazine and SMITH teens invites the reader to become a part of the story by contributing their own. Where did that idea come from?

LS: I was working at a magazine that is long gone, like many of the magazines I’ve worked for, called Yahoo Internet Life. It was a print magazine not actually owned by Yahoo, but they licensed the name. I was the executive editor there when it went under in 2002. I edited possibly one of the first stories about a blog. I ended up seeing user generated content coming and that people wanted to make media and be a part of the story. Meanwhile, my grandfather was pretty old, and I realized I didn’t know his story very well. I knew he came from Russia, and that he was a pharmacist but I didn’t actually have the whole story. Which is embarrassing for a journalist who is supposed to know people’s stories. So I asked him to tell me his story. “Ah, my story you wouldn’t be interested in”. And I pushed him a little. “I have this new video camera, I just want to turn it on. Practice. So just tell me a little something”. He talked for three hours non-stop. The obvious lesson that everyone knows and we all forget, even journalists, everyone has a story but sometimes you have to remember to ask. One of the things we do at SMITH is we ask. We think your story is important, just as important as famous storytellers. We give you a place to tell it, we make it easy to tell it.

CB: I have to ask, what is your six-word memoir?

LS: My official memoir for the book is Big Hair, Big Heart, Big Hurry. It’s not the best written six-word memoir, it’s not the wittiest, but it’s who I am.

If you’re interested in the Six-Word book series take a look at the Love and Heartbreak collection and the forthcoming teen collection, I Can’t Keep My Own Secrets. Jump over to SMITH Magazine to see all of the great projects SMITH has to offer. And for you teens out there who need a little time away from “adults” visit