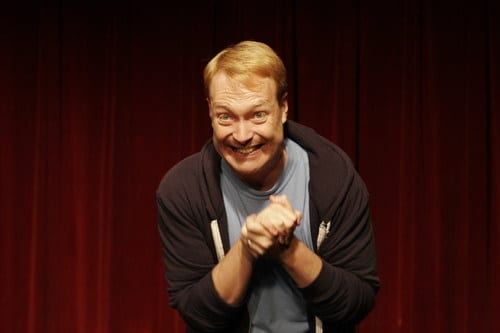 Kevin Allison is a comedy writer/performer best known for his role as a member of The State. In August, Allison launched his new project RISK! A weekly live storytelling event described as “the Moth, only edgier.” And later this month (September) there will be a podcast version of the show on Breakthru Radio and iTunes. Allison spoke to me about taking a chance, putting it all out there, and bringing people together.

Chris Bowman: It’s been a pretty big summer for you. First, after much anticipation, The State was released on DVD, and now RISK! How long have you been planning this project?

Kevin Allison: Gosh, you know. It’s so funny. I did a show last November called F*** Up. It was five characters and each one told a story. That’s what I’ve been doing for years and years whenever I perform as a solo artist. I’ve done a few one-man shows, and you know what? I think it was just getting really old. I hadn’t realized I was yearning to do something different. So F*** Up was characters all based on me, different aspects of my personality. And I found myself really struggling to connect with the audience. I was playing it too big, then I tried to play it down but I just felt like I wasn’t quite connecting. Then I did it in San Francisco at SF Sketchfest, and a lot of the guys from The State were there and again I felt like “Gosh, this isn’t quite working for me.” I was walking away from the show with Michael Ian Black and I said, “Well, what do you think?” (Laughs) Because he could tell that I wasn’t too thrilled with how the show had gone. He said, “You know, I really feel like you just want to speak as yourself to the audience.” And I was like, “You’re absolutely right.” I’d wanted to do that for a long time. So within weeks I just started going up places, telling my own stories and immediately the connection was palpable. I was getting big reactions and people were approaching me after saying, “Gosh, I just loved that.” But I was on to something. This story telling thing is booming in New York right now. And I noticed something. Anytime someone would go out on a limb, where they were revealing something a little bit more serious and profound than you’d see at your normal comedy show the audience would respond that much more. The audience was like, “I appreciate that you’re laying it all out there with this one.” And so I thought well why don’t I just put a show together where that’s the entire theme. Tell personal stories and in some way or another try to push yourself to do something on stage that you’ve never quite done before.

For more from Kevin Allsion and why stories of misfortune can be good for you, click Read More

CB: The show has been described as “The Moth, only edgier.” I’ve heard a recovering heroin addict tell an incredibly sad/funny/difficult story on the Moth. How edgy are we talking?

KA: Oh well, first of all, I think what’s going to happen is we will get edgier as we go. People associate me with comedy and the audience that’s been coming to RISK! this first month are all really expecting stand up no matter how many times you tell them it’s story telling. So they’re still getting comfortable with what’s going on. Once we have this podcast down, I think that a lot of the artists as well as the people who come to see shows will start hearing this and start to understand a little more what the show is about. The Moth is kind of the standard bearer of all this stuff. I think what we have in mind is let’s say we’re trying to be edgier than The Moth and see what happens. Our last show was “Spiritual Breakthroughs and Breakdowns” and Janeane Garofalo was at that show. That was really cool. That particular theme had a kind of gravity to it that brought out some stuff that you definitely just do not hear at your average comedy night (Laughs). People talking about the way they were praying at this point in their life or how they’ve given up on God. It was kind of a trip. I mean, the night is still loaded with laughs, it’s just that some of the stories dip in to a moment of where you’re like, “Oh, holy shit, this is bringing a tear to my eye.”

CB: I guess that’s the benefit of funny people telling serious stories. They’re always aware of how serious the situation is. They can always make you laugh, if need be.

KA: Yeah. Absolutely. And it’s a very cathartic thing. I was talking to Ian Roberts, he was talking about how at some of these storytelling shows the feeling that you get listening to people’s stories are -you know ‘cause often times, just like with the heroin addict you were talking about- you hear that stuff and you’re like, “Oh, ok. I’m not so fucked up! (Laughs)

CB: Part of the appeal, I imagine, is that on the other side of that is we can all relate to some of these stories.

CB: The exciting thing (for all of us that can’t attend a live show) is the podcast. It sounds as though it will differ slightly than the live experience. It won’t be just a direct recording of the live show. What will the format be?

KA: What it is, is we interview people. Every Wednesday we send out emails to anyone we can think of saying, “Does anyone want to come in to this recording studio and record a story about…” you know, whatever topic we’re looking for that week. People will usually come in and tell a story that lasts about 8-10 minutes. We’ll record it a few times and ask questions. Then we’ll cut that down to about five minutes or so and lay in music. We’ve got a ton of great musicians, the band Organissimo and Craig Wedren who did the music for The State. We’re also taking theme songs. Every act of each episode will have a different theme song. We want to just keep playing around with theme songs until one sticks. It’ll sound a little like This American Life in that there will be these studio-recorded stories with music and all, and then there will also be the lengthier stories from the live show.

CB: Many comedians have similar stories when it comes to their early experiences. Taking that initial chance and putting themselves out there just to see what happens. I suppose that can apply to anyone who’s interested in getting anywhere in life. What makes a story a RISK! worthy story?

KA: I think it’s different for everybody. We had Jonathan Kesselman, the director of The Hebrew Hammer. He’s doing a project right now with Dave Foley and Kevin Mcdonald, but anyway. For him it’s just a risk to get up on stage, (laughs) ‘cause that’s just not what he does. That, plus it was the Strange Sex night, and he told a story with a lot of intimate details. For a lot of comedians it’s a risk to get up and avoid your normal go-to stuff. Like I always said as an example if we could ever get Sarah Silverman on, I think the first thing I’d say is, “No crude shit.” No cursing. Keep it clean. That would be a risk. It’s interesting. People get a little bit frightened when people find out what the premise is.

CB: What is the biggest risk you’ve ever taken, either personally or professionally?

KA: Hmm. Wow. Oh! I know what it is, actually. It was The State quitting MTV. Which was a -which I was not for, (laughs)- but I kept my mouth shut ‘cause I guess there was this kind of ground swell of, “Yes! We’re never gonna get further in our careers unless we do something dramatically, almost stupidly, daring. And at the time, we thought we were quitting MTV to go to ABC. ABC had toyed with the idea of maybe putting us up against Saturday Night Live. Nothing was for sure, there were no contracts or anything like that. Sure enough, we quit MTV who had promised us thirty more episodes, and ABC said, “Whoops. Forget about that.” (Laughs). So suddenly we didn’t have a TV show or a career anymore. Yeah. And we kept making mistakes after that. It kind of did beat the group in to breaking up, really. But I think that was the big first mistake. That haunted me for years, and years, and years. Like I tell people all the time, in The State we always said, “This is not about our individual careers, we’re building the career of The State and we’re going to have a Rolling Stones kind of career. It’s going to go on forever. Which was naïve of us. But when we did break up, wow, I just didn’t know what do with myself for the longest time. And there’s actually news, just this week, I was telling you I had a crazy week. We are in the process of putting together another way of working together as one unit. It’s just a baby that’s being born right now. I’m very proud because I’ve been the one spearheading this thing. The biggest problem The State has had since we broke up -and we knew it all along, which is why we had this unwritten rule that no one could ever take another job that might take them away from The State. Because as soon as that happened we knew it would be so hard to make 11 people’s schedule work together again. Sure enough that’s the problem we’ve had ever since. We all email each other, (laughs), every week. We’re still in touch, but we’ve never been able to work together on a big project again. We might have figured out a way to get something happening again.

CB: Is it too early to say what it is?

KA: Yeah. I really can’t because it’s not even at a stage where we’ve started pitching it or anything.

Be sure to subscribe to the RISK! podcast and keep an eye out for The State’s new project somewhere down the road!