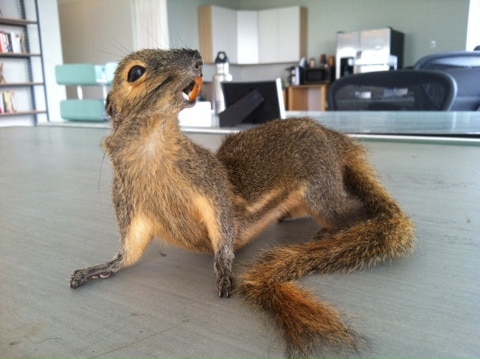 Congratulations to our Nightmare Gerbil Contest Winner Shalyn Claggett, who wrote the fine poem (with footnotes, no less) that you see below! [Edited to add: footnotes were not considered in the judging process – two versions of the poem were submitted.]

And to runner up, Lydia Comer, who creates AMAZING art out of dead animals (check out her submission here!).

And THANK YOU for all of the creative entries. We wish we had a dead gerbil to send to each and every one of you.

Zoonomic Muse!1 Your powers I enlist
To persuade Hodgman, Judge, and Jesse, Fist
Of Justice! True and righteous, they must see
The Nightmare Gerbol2 should belong to me.

I long have labored to find and collect
Those artifacts time too oft will forget.
To this assortment fine I hope to add
A rodent fierce, rogue taxidermiéd:

A Wedgewood dish from Silver Jubilee,3
The signature of Makepeace Thackeray,4
A cross from wood of Wesley’s pew have I,5
And dust from Sir James Simpson’s diary6

If fit with gerbol, all would want to see
My cabinet of curiosity,
And for this reason, may this poem move
Your Judge’s heart, and my request approve.

1The invocation of the Zoonomic Muse alludes to Erasmus Darwin’s Zoonomia, which fittingly addresses things fantastic in nature, and (much like the evolving species it addresses) prefigures the inchoate ideas which would later emerge fully developed from the mind of his illustrious grandson.
2Issuing from the fear of having her pie hole prematurely closed, the poet has adopted a spelling that reflects Bailiff Jesse’s pronunciation of the word.
3More specifically, from the Silver Jubilee of Queen Elizabeth II in the year 1977—also the year of the poet’s birth. This dish, procured by the poet’s uncle and bequeathed to her on her twenty-first birthday, reflects said Uncle’s remarkable prescience regarding his niece’s then nascent Anglophilia.
4 Acquired from Ebay for merely forty-seven dollars, this signature is almost certainly a forgery. The poet bases her belief in its possible authenticity on the supposition that an actual forger would not list such an item as “Victorian author. Handwriting.”
5 The pews from the first church founded by evangelical and obsessive-compulsive Christian John Wesley were
dismantled in 1977. An enterprising parishioner raised money for the church by selling small crosses made from
the wood—a plan which Wesley would almost certainly have detested. As a former Methodist with a high-church affection for the “bells and smells” of Catholicism, the poet relished the rare opportunity to acquire this most rare of rarities: a Protestant relic.
6 The medical diaries of Sir James Young Simpson, discoverer and popularizer of the anesthetic properties of chloroform, are housed in the manuscript collection of the National Library of Medicine in Bethesda, Maryland. While assessing these as a possible subject of research (quickly rejected after realizing they were in Latin), a quantity of paper “crumbs” fell on the poet’s lap. With fetishistic zeal, she collected these—and to this day, she regards this experience as her most valuable encounter with primary source material.