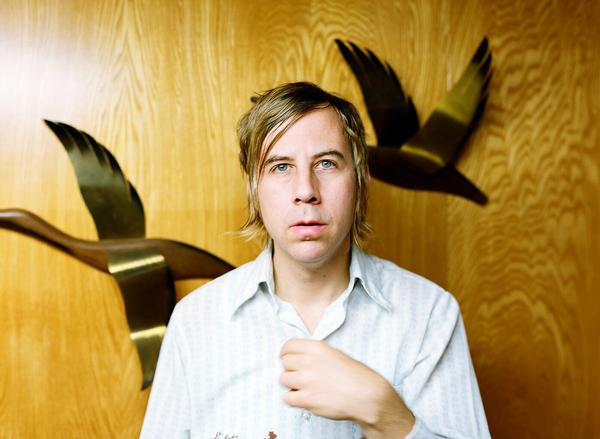 John Vanderslice is a San Francisco based singer/songwriter. The former MK Ultra vocalist/guitarist has the distinct honor of having produced Spoon (Gimme Fiction), The Mountain Goats (Heretic Pride, Sunset Tree) among others. Vanderslice is also the owner Tiny Telephone, one of the few remaining all analog (tapes!) recording studios in North America. His most recent album Romanian Names is a beautiful album full of perfect warm pop songs. Vanderslice took some time to talk about his new band, the reason why he decided to hang up his production hat, and the fact that he doesn’t own a giant plot of land in Marin County, CA.

Chris Bowman: You just wrapped up a tour in support of Romanian Names. At the start of the tour you said on your website how “stunned” you were by your band. What made this band different from previous bands?

John Vanderslice: Well, I’ve never played in a quintet before. So we had a much more orchestrated rock band set up. I had done that Great American Music Hall show with a thirty piece orchestra but this, as far as a rock band, was the most arty band that I have toured with. We had two guitar players, two singers other than myself, and it was really fun. On some levels it’s actually easier to play when there is so much music happening on stage. You have an enormous amount of freedom.

CB: Romanian Names is a beautiful record. Really. I hope you don’t mind me saying this, but I can only think of a couple of artists that are in the same realm as you. Jason Falkner and Brendan Benson. Beautiful polished pop songs expertly written and recorded. Are you ever surprised that your caliber of pop is not more widely recognized?

JV: Of course. I think that’s a very human reaction. I don’t think I’ve ever met a rich person who didn’t think they should be richer. Or a band that didn’t think they should be bigger. But I think that’s kind of a trap. There’s no end to wondering what is rightfully yours. That I don’t own ten thousand acres of land in Marin County is really upsetting to me on a certain level, (laughs), you know?

From my perspective because I’ve been a middle class songwriter for ten years I know how difficult it is to even have a career where you can carry a band, pay everyone fair wages, tour whenever you want, and put out the records you want. That is the Holy Grail. To be able to do that and sustain that is so difficult. So, yes, a part of me would love to be rich enough to own a ton of land on the coast of California. I would love to be able to elevated into that “invisible” rich tax bracket. But that’s just not going to happen.

CB: The last time you spoke to TSOYA you thought that you’d no longer have time to produce anymore. Since then, though, you produced the Mountain Goats “Heretic Pride” (released in 2008 and so, so good). Does this mean you have returned to producing?

JV: Well, I did that record because John (Darnielle) asked me to and because he’s been one of the central figures, artistically, in my life for a long time. It’s impossible to not work with John. Barring Darnielle calling me up, I’m definitely not producing anymore. I’ve definitely turned down a bunch of projects. It’s really difficult to work your way through your own material and other people’s material. It’s very hard not to get invested when you’re producing a record. It’s an intense creative act that is exhausting. I just can’t produce, tour, and make my own records.

CB: I love the Mountain Goats. I had no idea your name was attached until recently.

JV: Those were important records to work on for me. I learned a lot working with John. He makes records very differently than I do. They tend to be tracked live, they’re made very quickly, and he is extremely disciplined and good at getting first and second takes.

CB: Well, one thing you guys have in common is your strong story telling ability.

JV: I definitely think he’s a great story teller, for sure.

CB: I’m not sure what it means but if feels like your songs breathe, musically. Like it’s as much about the space between the notes as it is about the music itself. Does that make sense?

JV: Absolutely. That’s something that took me a long time to try to work in to the music. I didn’t start out making really patient music. But as I tried to work my way through writing songs that became more important. I didn’t want there to be a Closter phobic, hard sell kind of felling to anything I was doing musically. And that’s hard to do. It’s hard to believe in the material. I see this a lot in live bands. They can’t just really settle in to a song. Tempos are just jacked up through the roof. That’s something I really consciously work on. Trying to find a kind of patience.

CB: Amongst the songs on Romanian Names is the critically favored Too Much Time. What is the genesis of the story in that song?

JV: Like anyone who’s in a close relationship I imagined one day, after having some kind of fallout or blow up, what it would be like to be exiled from my house. I imagined this person living on his own, returning to nature, which after some sort of domestic tranquility would be the equivalent going insane. So that’s really the beginning of the song.

CB: Your songs are more fiction based rather than personal experience. Fitting these stories into three-minute pop songs must be challenging. Have you ever tried expanding an idea into a short story?

JV: No, but I’ve definitely appreciated how incredibly difficult that would be. I get emails from people who run fiction blogs and literary blogs. People that I really like and admire. They’ve asked me to contribute essays, short stories, or write about a particular topic. I’ve done just a little bit of outside writing and it is really, really difficult.

CB: Much of the discussion the last time you spoke to TSOYA centered on the differences between analog and digital. In recent years there has been a huge mainstream attraction to vinyl. Although, most of the source material is digital, there is that appeal of analog playback. Has the analog resurgence been felt at Tiny Telephone Recording?

JV: Oh yeah. There are tons of bands now that want record analog records that are vinyl only. They love the idea that they are making this old school analog all-the-way-through release that is really bounded by the limitations, for lack of a better word, of analog or linear recording. It’s amazing how much vinyl sells right now. Having just finished our tour, we couldn’t believe how much it had changed in the last six months. Basically we were selling vinyl one-to-one vinyl to cd. It’s pretty incredible.

CB: Why do you think that is?

JV: Well, cd’s suck. They’re so lame, on every level. The jewel case will go down in history as the least sexy consumer item ever made by human kind, (laughs). When AOL dropped those 200 million cds on people’s doorsteps people realized, “Oh wow. A cd is worth one cent, so why am I buying these things for 20 dollars?” 400 hundred megs is not that much information for uncompressed music, so why can’t you just download an album? I guess the sole basis for digital storage has been undermined.

CB: So what’s happening next for you?

JV: We’re playing a couple of festivals. Austin City Limits festival, Outside Lands in San Francisco that takes place in Golden Gate Park. That will be fantastic.

Romanian Names is available now on iTunes and fine record stores everywhere. For a preview you can listen here. Support your local record store!