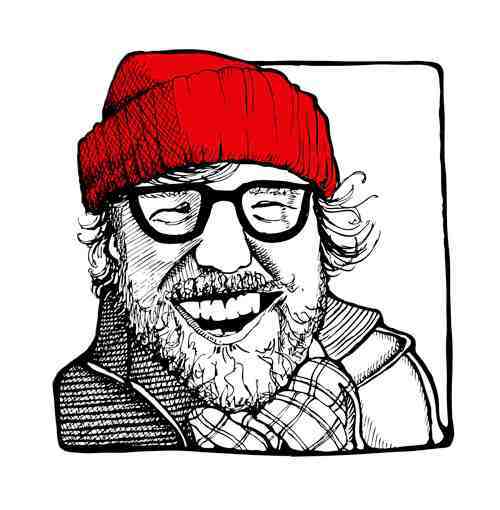 John Roderick is the lead vocalist and main songwriter for Seattle-based band The Long Winters. Roderick’s lyrics are razor sharp, highly sing-alongable, and often detail the sweetness and the struggle of relationships. In short, the man can write a mean pop song. The Long Winters is recording the follow-up to 2006’s Putting The Days To Bed, due out in late spring 2010. I spoke to Roderick about the new record and the band’s new, loose approach to the singing-songwriting exercise. As for the new sound, it’s familiar, but not too familiar. But not too not familiar.

Chris Bowman: One thing that comes up again and again when speaking to creative types is procrastination. It’s ever present when trying to get things done. You allude to it in 13 Songs, the series documenting the creative process behind The Long Winters new record. What does procrastination mean to you?

John Roderick: I often get down on myself for procrastinating, chiding myself for laziness, calling myself a do-nothing, but then I’ll have an intense burst of creativity seemingly out of nowhere. Procrastinating is very hard to distinguish from ruminating. I’d like to just call them synonymous and be done with it, but unfortunately the world works on deadlines and people want their favorite artists to make new stuff NOW!

I’m slow, I think about stuff a long time before I lift a finger, and I rewrite stuff that other people might consider finished. It looks like I’m avoiding work, and I joke about it, but I’m working.

CB: You have been working! And rumor has it that The Long Winters are headed in a new direction. You were quoted as saying that the new album will be more, “long explorations,” rather than the shiny pop nuggets the band is known for. Granted it was said a few months ago, and as we all know, things can change. Where are you now in the recording process? Would you still say that you’re steering (or have steered) away from previous offerings?

JR: Well, I think the record we’re working on now is by far the least intentional thing we’ve ever done, in the sense that there was no stated purpose, no governing aesthetic, no semi-conscious guidelines. The songs are all based on riffs that were recorded spontaneously in the middle of the night. The riffs were combined into songs at the last possible moment with a minimum of forethought. Once we started working we didn’t throw anything away, so there hasn’t even been curatorial culling. The result is as close to the unadulterated sound of The Long Winters in the studio as you can get. It’s kitchen sink pop.

CB: That’s interesting. The only thing you know going into the studio is that you want a record coming out of it. That must be both liberating and challenging. Without a solid idea of what you want from a song you could rework it until you’re on the brink of insanity. Of course, I have no idea how you work, I’m just imagining it could go that way. As you said, you’ll keep rewriting when most people consider it done. How do you know when a song is finished?

JR: It’s always perfectly obvious to me when a song is done. In the past we’ve been compelled to release songs that I wanted to keep tweaking because money and/or time were the salient factors, and if resources had been unlimited they might have sounded very different. Which isn’t to say that I considered them unfinished, since money and time are very real considerations, but only that I had to declare them finished.

For this record money hasn’t really been much of an issue, since we’ve been doing much of the tracking ourselves, and time is only just starting to weigh on us now. The result is that we’ve had the opportunity to live with certain sounds and textures and to try things out without being married to them. The songs have had a chance to arrive at a place where there simply isn’t anything else we would add even if we had ten more years. That’s very gratifying, creatively.

CB: After a while though, you must become fond of certain parts of a song. Maybe you do get married to them. Now that you’re on tour you must get a sense of how the audience feels about the new material. How much does crowd response influence your feelings towards the new songs?

JR: Yeah, some parts do end up dictating everything else, but it’s surprising how many of the treasured bits get sent back to the woodshed as the song evolves. We keep submitting and resubmitting every choice to new scrutiny, and if the song starts moving away from the original concept, even from the riff that inspired it, we follow the song.

I can’t give too much weight to audience response because experience has shown that, even among the super-fans, our music takes multiple listens to parse. Last night in San Francisco a few of our original fans were there, and they sort of blinked uncomprehendingly at the new song I played, which was in 5/4 time and only has two chords. Those unconventional elements take a listen or two to grok, and likewise they take me a while to learn how to play. That’s the thing that’s most likely to effect the recordings: that I discover a new way to play while playing them live.

CB: I had a conversation with someone the other day about the shelf life of an album. I usually find that if I really like a record right away, I’ll play it for a few weeks non-stop. But sometimes an album that has a few immediate gems also has songs that may not be so instantly gratifying. Those are the records I reach for again, and again.

JR: Yeah, I keep saying the best music magazine would be one that only reviewed records, or books or movies for that matter, that were at least three years old. Something has to break this fanatical worship of “the latest thing”. There have been some amazing records passed over in the last ten years in favor of some next big thing that didn’t hold up.

CB: That’s true. There is SO much music out there. It’s been easy for artists to make a decent sounding record at home for a few years now. The problem is that technology often just makes a poorly written song sound good. Clearly, crafting a great pop song is at the top of The Long Winters agenda. With the new, more loose approach to songwriting in mind, how does that effect your approach to writing lyrics?

JR: Well, that’s the million dollar question. The lyrics are always the element I’m most attentative to, and on this record the stakes are higher because I’m so happy with the instrumental tracks. Plus, I’m trying to write the lyrics to the entire record all at once.

It’s daunting, but also exciting. The lyrics come on their own schedule, so sometimes I feel like I’m just sitting around waiting, or that I should go get into a really damaging and inappropriate relationship with a crazy person just to drum up some words. But I know what all the songs are about, I just don’t know the exact phrases yet.

CB: I’ve been thinking about this since I heard a Jonathan Ames story on The Moth podcast recently. Writers who’ll research a story to the point where they find themselves in a situation they wouldn’t otherwise be in, and getting a completely different story in the process. When was the last time you found yourself following through on an unusual or unlikely circumstance that had great potential for a story?

JR: Well, some of us are just made that way. I think Jonathan Ames is this type of person too, who just naturally pursues the most eventful course of action in every situation. The fact that he calls it “research” after the fact is just retroactive justification. I see the distinction all the time on tour with other bands. Most people, when it’s raining and they’re tired and it’s two miles through a ghetto back to their hotel, most people will call a cab. They would think it was nuts not to, or at least they would never question the choice. But I was born to raise hell, and I invariably walk that distance in the rain, through the ghetto, dead on my feet, because life would seem incredibly banal otherwise. And sometimes an adventure takes place, some encounter worth retelling or some vignette worth remembering, that I can point to as “the reason” I went the hard way. But that impulse to cut across the swamp, to eat the purple berries, to walk the rest of the way while everyone else drives, it’s not about telling stories. It’s about questioning received wisdom, resisting seduction by comfort and routine, pushing out the borders of what you know and where you’re comfortable. Most of the time NOTHING happens, no story worth retelling, and those are some of the best times.

Good storytelling is a skill that timid people can have in spades, and many adventurous people are reticent and personally dull, so the relationship between adventure and story is tangential. Plus, lots of people are just liars. But some people are driven to explore and also like spinning yarns, and I’m eternally grateful that I have both traits.