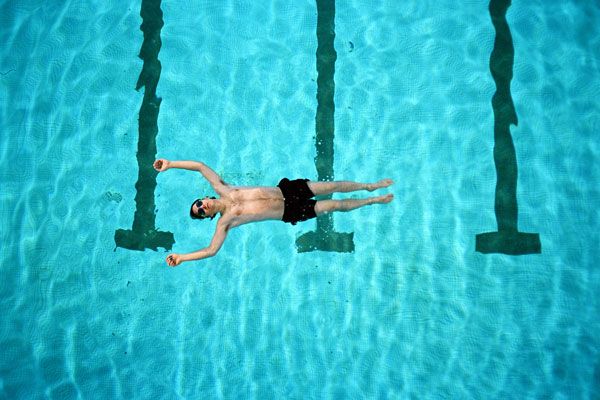 Jeff Harris is a Toronto based photographer who has documented his life everyday for ten years, one photo at a time. His website www.jeffharris.org was nominated for a Webby Award three years in a row. Harris takes a lot of the photos himself, and recruits friends when necessary. When the opportunity arises, Harris will get a celebrity to snap a photo or two. So far luminaries such as Beck, Gene Simmons, and Al Gore (and many more) have contributed. The series has an amplified poignancy due to Harris’ recent life-altering cancer diagnosis. Harris speaks about the challenges involved with a project of this magnitude, turning the camera around on a celebrity, and what happens next.

Chris Bowman: What gave you the idea to start a project like this?

Jeff Harris: In 1998 there was a lot of hype about Y2K and counting down the last days of the 20th century. My grandmother was born in 1900, and I wondered if my grandkids would be impressed that I lived through the year 1999. So I thought I’d make a diary, just take a picture of myself every day because I never quite succeeded with the diary concept. And taking a picture takes five seconds. I just wanted to commemorate every day of the last year of the 20th century. When I was winding down a friend was like “Why don’t you do it for another year?” And I said “Are you crazy?” Then I thought, OK. I’ll document the first year of 2000. After that it just switched to autopilot and we haven’t stopped for ten years now.

CB: How many photos do you take in a day?

JH: When I started I would take two. Now I take more like four or five, just because I’m not happy with the limitations of having two images to choose from. I shoot it on film. I haven’t changed the way I’ve been doing it since day one. One of the reasons I like shooting on film is because it does limit you. You’re not going to take 500 pictures of yourself. You’re going to take a couple and choose from there.

CB: All of the images are beautiful, even the ones taken by guest photographers. What sort of direction do you give the photographers?

JH: I try to envision what it will look like from their perspective and make sure to set them up pointing in the right way. I might give them some verbal instruction like “This should be the top and this should be the bottom” and that’s when we have friends take the picture. Sometimes I have celebrities take my picture. In that situation you only have about ten or fifteen seconds of interaction and I try to make the scene look unique and original. That it’s just the two of us hanging out together and not me and 15 other people trying to get autographs. An example of that was when I went to see Sarah Harmer speak at the Toronto Library and there was probably 200 people in the room. After it was over I went to the bookrack in the library and as she walked by I asked her if she could take my picture. I’m sitting on the floor looking up, searching through a book and it looks like we were just in the library together. But we weren’t. There were hundreds of other people there.

CB: How do you gain access to the more famous guest photographers?

JH: It’s not that hard to meet celebrities if you want to. If you know they’re putting on a concert, you can show up at 4 in the afternoon and chances are you’ll see them walk in for sound check. If it’s the film festival they’re everywhere. It’s not that hard, especially in Toronto.

CB: Yeah. Well there’s one with you and Gene Simmons in a bathroom mirror and some others with some pretty big name celebrities. And I was asking myself “Who is this guy? What kind of a life does he live?”

JH: The Gene Simmons one happened while a friend was shooting him for a magazine and I went along as the assistant. After the photo shoot was done I asked if he could take my picture. No, I’m not connected to the celebrity world. When you shoot over a ten-year period though, it looks impressive. It probably works out to about one celebrity every two months, so, six celebrities a year. Multiply that by ten, you get 60 celebrities.

CB: Who was your most memorable encounter?

JH: The best one was Al Gore. He came to Toronto to promote his little film “An Inconvenient Truth”. It was before the film had come out. I don’t think anybody predicted how huge he’d become after that film. But at that point he was the underdog presidential candidate and had been in hiding for six years. He was very approachable and friendly and polite. A funny story about that, is I went to see Werner Herzog introduce some of his films that night at the Bloor Cinema. So I got him to take my picture, but I could only use one photo for the day. It was a showdown between Werner Herzog and Al Gore. But Gore’s picture was nicer so I used that one.

CB: There are a few reoccurring images throughout the ten year exercise, dead animals being one. And not just dead, in some cases totally flattened! What is the fascination with them?

JH: It’s the marvel of being able to get up that close, especially with a wild animal like a raccoon. You get just get right up there and analyze it and see how beautiful it is, or a pigeon too. Animals you hate from a distance but when you see them up close it’s like “Wow that was a living thing.” It’s also commemorating it. This animal just got killed because of a car and I’m going to remember it. Earlier on, the road kill is kind of gory but later I developed an eye for elegant road kill, like a perfectly black squirrel with a dribble of blood coming out of its mouth, that kind of thing. Very Unique. I won’t just shoot any road kill. It’s got to be something I haven’t seen before.

CB: It’s incredible how intimate this exhibit is. You allow the viewer into many different moments of your life but it rarely feels voyeuristic. When getting your photo taken were you always aware of us, the viewer, or was it just another photo for the project?

JH: No. The first few years this project wasn’t even online. It was just in photo albums. And the only reason I moved it online was because I felt like the web interface was an easier organizational tool for me. If I wanted to look back on last year’s pictures I wouldn’t have to haul out the photo albums from the closet, I could just click. Even at that point it was probably another two years before I developed a web audience. So for the first third of the project I never considered that people were looking. All I really care about is making good images so I don’t worry too much about how people perceive it or weather I’m opening myself up too much. That’s the challenge for myself with this project, to make every day visually interesting or memorable. That’s what I’m most concerned about.

CB: Aside from the few repeated images, how do you keep things fresh artistically for ten years?

JH: To be honest even the repetition makes it interesting. Whether it’s revisiting something that’s already been done, or even when I’ve had a rough month. I just actually had a rough month of repetition, they’re interesting pictures, you can still work with them. It’s not like one picture matters, but how it plays out in the context of the larger series. There are a couple of bad images that get buried in the mix, boring images. Then better images come.

I’ve been in the hospital for a while. The entire month of April I was never allowed to leave the bed so every shot is of me in a hospital bed. Again, there’s something pretty amazing about-you know, how do you challenge yourself? Every day I’m stuck in the bed and it’s like, “Ugh, fuck. We have to take another photo”. But when you see those 30 images of me in a hospital bed, even though some of them suck and some of them I didn’t like going through, it was worth the effort because it makes a really interesting body of photos afterwards.

CB: When this project began it meant something to you, how does that change after being diagnosed with cancer?

JH: Part of this project is that I’m looking for a life narrative. Whether you get married or you’re going to have kids, something is going to happen. Oddly enough for 9 ½ years not a lot did happen to me. When I got cancer I thought, “Oh, this is that plot line that I knew was around the corner but didn’t know what kind of plot line it was going to be”. I find it interesting because you know in life, if you do something for ten years events will happen. I have a record of the day before, when I didn’t know, and a record of the day I found out, and all the subsequent visits and all the shit that happened to me after that. Now I can’t walk, my left leg is paralyzed. I need to learn how to walk again. So all the pictures right now are of me with a walker. And maybe by September I’ll learn to walk again and I’ll have a record and I can look back. It’s therapeutic. It gives me something else to think about.

If I had to tell a newly diagnosed cancer patient anything, I would say started a project that’s way super big and super stressful so you’ll have something else to focus on other than your illness. It’s like exercise. It’s like lifting weights. It’s visual exercise and psychological exercise. It’s challenging me to live a full life.

CB: So the plan is to carry on with the project?

JH: To be honest ten years has always been a logical landmark. I’ve always thought that I’d exhibit at that point, and then maybe chill out a bit. But this illness has reinvigorated me. It’s made me realize that the pictures matter to people and they matter to me. That I should keep going. So yeah, I’m still working away at it.

You can see the incredible work of Jeff Harris here. Here’s a nice video from Fashion Television.