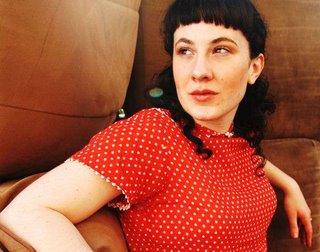 An old friend of The Sound of Young America, Mary Van Note, has been on a tear lately. She’s landed her own IFC.com web series, and is touring the nation with her acclaimed (and bizarre) standup comedy. Chris Bowman talked with Mary about the turns her burgeoning career has taken.

You teamed up with IFC.com this summer to release the web series Gavin Really Wants Me. How did IFC initially discover you?

I had some videos posted on Nerve.com, a sex magazine, which was a perfect fit for my weird and sexually themed videos. Nerve.com and IFC.com partnered up to put together these top 50 lists like Top 50 Greatest Sex Scenes in Cinema, and the popular Top 50 Comedy Sketches of All Time. I guess when they partnered up, the Nerve people showed the IFC people their video content and BAM! my series and the Nerve series “Young American Bodies” got connected with IFC.com.

Have you always had a raunchy sense of humor? Where did it come from?

No, I haven’t. I’m just your average girl who was raised Catholic and has issues about sex. I was pretty obsessed with it for awhile, and by “it” I mean talking about sex, but lately I’ve been writing about everyday things like roommates and internet dating.

What do you find more rewarding, performing live or producing the online comedy shorts. Why?

That’s pretty hard to say. I love doing both and they’re both so rewarding in different ways. I will always enjoy performing live. The feedback is immediate and there is always the feeling that anything can happen when you perform live. It is such a thrill to make a room laugh. Producing online content is a thrill as well. Probably my favorite aspect of producing and directing online comedy shorts is the ability to collaborate and work with others. That’s something you don’t get with traditional stand-up comedy.

What is the most valuable thing you have learned from collaborating with others?

Being a director was entirely new for me. The most valuable learning experience was simply communication. Communicating as a director working with a cast and crew was challenging and new for me, but became hugely rewarding.

When did you decide you wanted to go beyond the standard set-up/punch line style of comedy and embrace a more challenging performance art style?

I never consciously decided to embrace a certain style. The first time I ever performed I was really nervous and my material was more storytelling than “club comic” jokes. That first set went really, really well and my mentor told me to keep that nervous energy. Since then I’ve developed into a more mainstream form of a who I was when I first started. I’m still weird and quirky, and can perform at the most alt-y of rooms and theaters, but I can also perform at Blank Comedy Club with the best of the road comics and hold my place.

What is coming up next for MVN?

Jan 24—Feb 17, 2009 I’ll be a part of Belles and Whistles: the indie music and comedy tour of ladies making noise from San Francisco. Uni and her Ukelele, Foxtails Brigade and I will be touring the Pacific Northwest hitting cities like Portland, Seattle, Vancouver, Salt Lake City, and more.

2009 will be full of fun and excitement: traveling and performing, recording my debut comedy album, and shooting videos.