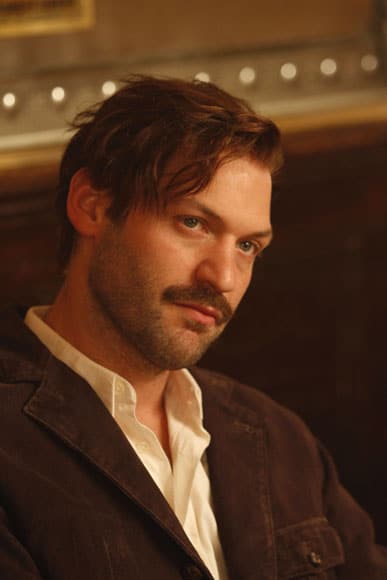 Corey Stoll is one of those actors that you’ve seen but might not recognize. He’s been in a handful of cop shows, most recently he played Detective Thomas “TJ” Jaruszalski on Law and Order: Los Angeles until that show was cancelled. He was in an episode of The Unusuals, which was a great show in my opinion, but it too was eventually pulled. Lately, he’s gained accolades for his turn as Ernest Hemingway in Woody Allen’s fantasy Midnight in Paris starring Owen Wilson. It’s a truly fantastic tale where larger-than-life characters from the Lost Generation of Paris in the 1920s (Hemingway, Fitzgerald, Picasso, Gertrude Stein) are visited by Wilson’s character who gets lost one night while walking through Paris…you guessed it, at midnight.

Chris Bowman: What were your thoughts on Ernest Hemingway as a person before playing him in the film?

Corey Stoll: It was pretty fuzzy before I really started researching him. I knew he shot himself. I knew he drank a lot. I knew he hung out with Fitzgerald in Paris. That was about it. I did read a biography and a bunch of material about him when I began. There’s an infinite amount. It’s an industry, Hemingway biographies. I didn’t want to get lost in those woods because it really wasn’t important. It was a red herring in terms of trying to portray the Ernest Hemingway that Woody Allen wanted me to portray. He really was not looking for some authoritative biopic portrayal of him. He was really looking for, not so much a joke or a parody of him, but a hyperreal pared down version of the myth and the literary sound of him.

CB: Did your opinion of him change after stepping into his shoes?

CS: It’s hard not to fall in love with him a little bit, especially when you’re reading him. His voice is so charismatic and confident. He’s just so attractive and charming as a persona. As you continue with the story and you hear his self-portrait, like in A Moveable Feast, you realize eventually that he was a horrible person to know. I think everybody who came into contact with him was burned pretty badly by him, eventually. I think he was a deeply unhappy person, so I think that’s a truth about him. As a myth, that makes him all the more compelling. I’ve been asked several times: ‘What do you think of him? Was he a misogynist? Racist?’ I think you can accept that that’s true and dislike him for that, but it doesn’t make him less compelling of a person to know about or to read. In some ways it makes him more compelling.

CB: As an actor, and more importantly as a New Yorker, being in a Woody Allen film must have been an incredible validation for you.

CS: (Laughs) Yes, in some ways a validation. I would never have dreamt it, really. The fact that he’s still making movies – good movies – at 75, after making 42 movies, is incredible. The fact that I, in my lifetime, got to be in one of these movies – I think a good one and it was a great part – it’s just ridiculous luck. Not validation that I knew I was even seeking. (Laughs).

CB: I read that as a child you had posters on your wall of Woody Allen and Scorcese. With that in mind, I want to get a sense of your headspace after meeting him and being offered the part. What was the first day on set like? How comfortable were you?

CS: It was this weird play between this sheer terror and this sense of “This is where I’m supposed to be”. It was really weird. It would sort of cycle back and forth from the second that I got the call that I had the meeting. It was this sense of “Wow, now I get to have a Woody Allen story.” (Laughs). Because, you know, I wanted to work with him so badly that I couldn’t admit that it was even a possibility to get the part. I knew I had an audition. I knew that they could never take that away from me. I knew I could tell my grandkids about what it was like to meet him. And then the fact that he handed me the material and it was one of the most interesting Americans was so awesome! (Laughs). And then it went really well, like “Wow, this could actually happen”. For all I knew it was just this one scene. But still, awesome. And then I got it! And I got a chance to come into his office and read the script. Well, not the script, just my scenes. I never read the script. I just keep on turning the pages, and I’m like “This is so good”. Because there are a lot of parts in Woody Allen movies that are a little underwritten. I think he often has this circle of people around an event, not necessarily fleshed out. But this is a character. This is a real meal to bite into. So then I showed up on set in Paris. We’re in this beautiful old apartment, this graceful building. The art direction was just beautiful. It was like we were in the 1920’s. It was so easy to get into that world.

CB: I’m sure you’ve heard the Woody Allen standup bit from the early 60’s where he weaves a story about all of the Lost Generation characters from this film.

CB: I think it’s incredible that you got to play a literary legend based on a joke by a comedic legend and personal hero of yours that was told 10-12 years before you were even born.

CS: Yeah, there were so many pinch-me moments my arm was all scabbed up. And it still keeps going. I was on a TV show for 22 episodes that went out to millions and millions of people every week and 15 minutes in this film got so much more reaction than that. I think that it really speaks to the film, and to Woody Allen.

CB: You come from a stage background and Woody Allen has written a dozen plays or so. How close does working on one of his films resemble stage work?

CS: There were two completely different modes that I experienced during the film. There were those big group scenes that were, I think, very similar to theater and using a lot of the same skills as theater and improv. He was constantly telling people “If you don’t like a line, if you want to change anything, go ahead. Don’t worry. I’m not precious.” Which is really crazy. It’s one thing to hear somebody who isn’t one of the greatest American filmmakers say that; but to hear Woody Allen say that, I mean, he’s a great writer and nobody on that set thinks they are a better writer than Woody Allen; but that is both exhilarating and a really scary challenge. There were times where you had to improvise because he hadn’t necessarily connected all the dots in terms of moving the story from one place to another. You’ve got Picasso, Gertrude Stein, and Hemingway trying to improv and there were definitely some awkward moments on set. (Laughs). I definitely think he got such a strong cast – and for the most part actors with theater experience – that there is life going on. Especially with the big group scene. He has a hand-held camera or a steady-cam and it’s all in one shot. He doesn’t cover. He doesn’t go and protect himself by finding places where he can cut in. It’s all there. And he wants it messy, too. I think he’s really a very courageous filmmaker in that sense. I think at times to his detriment, but I think he’s more interested in moving forward and giving a sense of life than a sense of perfect ability in the performance. Which is exciting. And then there were those other scenes with Owen Wilson where we had the luxury of being able to be a little bit more detailed and zero in. That’s part of the joke, too, is how intense and focused and singular the Hemingway character is.

CB: I understand you were told the portrayal of Hemingway should be about “the writing, not the man”. But in your research did you come across any stories of the man that really stuck with you?

CS: There are those like the famous story of a boxing match between him and his friend. Fitzgerald was the guy keeping the time and he forgot how long a round lasted and it was to Hemingway’s detriment. He got sucker punched and went ballistic on the guy he was fighting. Stories like that reinforce the sense of Hemingway as a fighter…

CS: Yeah, yeah. It’s funny, somebody was just talking to me about a picture they had on their wall of him and this scar on his face from a fight. His face was all bandaged up. It actually wasn’t from a fight. He was sitting on a toilet and the skylight fell and he cut his head…

CS: Yeah! He’s just a guy who sits on the toilet. And he was actually scarred permanently from that. You can do all the research and find out who the guy really is. You know the fact that he was dressed as a girl for the first few years of his life. I don’t know exactly why (laughs), but I think that’s kind of interesting.

CB: I think he was trying to outrun that shadow for the rest of his life.

CS: Right, yeah. That stuff is all fascinating but for me the opportunity to actually read an enormous amount of writing in a short amount of time…I still think his writing is more interesting than he was as a person. What he brought to literature and prose was more important that what he brought to celebrity culture.

CB: Can you talk about what you’re working on now?

CS: Yeah, The Bourne Legacy. That’s been really fun. (Laughs) They made me sign an oath of secrecy in blood so I’m not really sure how much I can talk about it.

CB: I just want to say I was a huge fan of The Unusuals. I realize you were only in one episode but it was great. (Spoiler Alert!) I was happy that your character “Trainwreck” Powell was innocent. But just so you know, I never doubted it for a second.

CS: Oh! (Laughs). Yeah, I really liked that show. I liked working with Jeremy (Renner) again. We did North Country before. He’s great, I was really thrilled.

CB: Well, Corey, thanks so much for taking the time to talk about a movie that you’ve probably been done with for at least 18 months.

CS: (Laughs) It’s alright. It’s one of the most interesting things I’ve done so I’m pleased to talk about it.