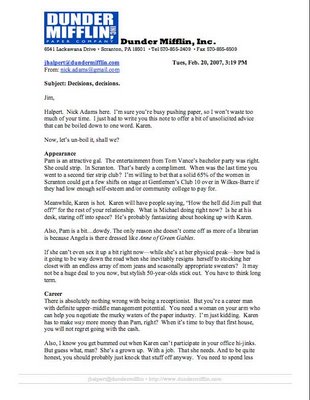 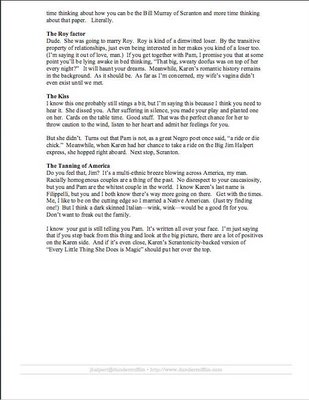 Click on the above to enlarge, or just read this handy transcription:

Halpert. Nick Adams here. I’m sure you’re busy pushing paper, so I won’t waste too much of your time. I just had to write you this note to offer a bit of unsolicited advice that can be boiled down to one word. Karen.

Appearance
Pam is an attractive gal. The entertainment from Tom Vance’s bachelor party was right. She could strip. In Scranton. That’s barely a compliment. When was the last time you went to a second tier strip club? I’m willing to bet that a solid 65% of the women in Scranton could get a few shifts on stage at Gentlemen’s Club 10 over in Wilkes-Barre if they had low enough self-esteem and/or community college to pay for.

Meanwhile, Karen is hot. Karen will have people saying, “How the hell did Jim pull that off?” for the rest of your relationship. What is Michael doing right now? Is he at his desk, staring off into space? He’s probably fantasizing about hooking up with Karen.

Also, Pam is a bit…dowdy. The only reason she doesn’t come off as more of a librarian is because Angela is there dressed like Anne of Green Gables.

If she can’t even sex it up a bit right now—while she’s at her physical peak—how bad is it going to be way down the road when she inevitably resigns herself to stocking her closet with an endless array of mom jeans and seasonally appropriate sweaters? It may not be a huge deal to you now, but stylish 50-year-olds stick out. You have to think long term.

Career
There is absolutely nothing wrong with being a receptionist. But you’re a career man with definite upper-middle management potential. You need a woman on your arm who can help you negotiate the murky waters of the paper industry. I’m just kidding. Karen has to make way more money than Pam, right? When it’s time to buy that first house, you will not regret going with the cash.

Also, I know you get bummed out when Karen can’t participate in your office hi-jinks. But guess what, man? She’s a grown up. With a job. That she needs. And to be quite honest, you should probably just knock that stuff off anyway. You need to spend less time thinking about how you can be the Bill Murray of Scranton and more time thinking about that paper. Literally.

The Roy Factor
Dude. She was going to marry Roy. Roy is kind of a dimwitted loser. By the transitive property of relationships, just even being interested in her makes you kind of a loser too. (I’m saying it out of love, man.) If you get together with Pam, I promise you that at some point you’ll be lying awake in bed thinking, “That big, sweaty doofus was on top of her every night?” It will haunt your dreams. Meanwhile, Karen’s romantic history remains in the background. As it should be. As far as I’m concerned, my wife’s vagina didn’t even exist until we met.

The Kiss
I know this one probably still stings a bit, but I’m saying this because I think you need to hear it. She dissed you. After suffering in silence, you made your play and planted one on her. Cards on the table time. Good stuff. That was the perfect chance for her to throw caution to the wind, listen to her heart and admit her feelings for you. Happily ever after time.

But she didn’t. Turns out that Pam is not, as a great Negro poet once said, “a ride or die chick.” Meanwhile, when Karen had her chance to take a ride on the Big Jim Halpert express, she hopped right aboard. Next stop, Scranton.

The Tanning of America
Do you feel that, Jim? It’s multi-ethnic breeze blowing across America, my man. Racially homogenous couples are a thing of the past. No disrespect to your caucasiosity, but you and Pam are the whitest couple in the world. I know Karen’s last name is Filippelli, but you and I both know there’s way more going on there. Get with the times. Me, I like to be on the cutting edge so I married a Native American. (Just try finding one!) But I think a dark skinned Italian—wink, wink—would be a good fit for you. Don’t want to freak out the family.

I know your gut is still telling you Pam. It’s written all over your face. I’m just saying that if you step back from this thing and look at the big picture, there are a lot of positives on the Karen side. And if it’s even close, Karen’s Scrantonicity-backed version of Every Little Thing She Does is Magic” should put her over the top.

. He blogs at nickadamsweb.com. You can choose Karen on MySpace here.

Our pals from Lindsayism and Zulkey are selling Pam and Karen t-shirts here.