DC Comics, home of icons such as Superman, Batman and Wonder Woman, is starting from scratch. The company is taking titles such as Action Comics, where Superman first appeared in 1938, all the way back to #1. This is a new universe featuring all of your old favorite characters and providing them with new opportunities for thrilling feats of daring do! But the creation of a new universe also means that within the context of these stories, all the DC adventures for these characters that you read and enjoyed as a child (or adolescent, or adult) didn’t happen. As such, this is a fantastic time to dip your toe in the superhero water without getting bogged down by decades of complicated continuity. Since there has been so much chatter recently about The New 52, I asked two of our resident comic book addicts, Dan Sai and J. Alex Briggs, to tell you about the few that they are most excited about picking up. 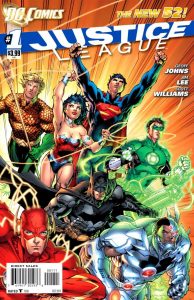 Justice League of America by Geoff Johns and Jim Lee

This is the title I’m most excited about. DC is trying to make Justice League their flagship book again. The League is really the grand daddy of team books with each individual member having the power to destroy the world. The challenge for Geoff Johns is not to keep finding gigantic threats that would be sufficiently challenging (he’s a comics writer and those guys think of 15 weird monsters before they finish their coffee), but to make the character interaction compelling. We all have a good idea about how Superman and Batman act, but how will Flash and Cyborg get along? There’s a lot of potential for new relationships there. Johns had a stellar run on both Justice Society and Teen Titans, particularly when it comes to the quieter moments, so I have high hopes for this one. Jim Lee is the penciller for the book,and has redesigned all the costumes. There’s been controversy around some of his choices: no red briefs on Superman and pants on Wonder Woman (that’s the kind of thing that passes for controversy amongst comics fans); but I enjoy how his drawings convey action and movement rather than leaving the heroes looking as though they are posed in every panel. With the classic lineup of Superman, Batman, Wonder Woman, the Flash, Green Lantern, and Aquaman, and new addition (and Teen Titans graduate) Cyborg, I have a feeling this book is going to be something I read again and again through the years. 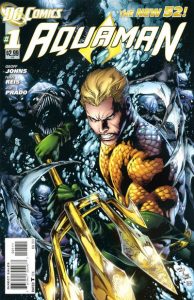 Aquaman has always been a bit of a joke, but it has SO MANY things I love: Sword and Sorcery action, political intrigue, a protagonist that’s a little bit of a jerk, and a healthy dose of simple wackiness. That being said, the book has just never really clicked for me. There’s been some grave “heavy is the head that wears the crown” takes on the character, and of course the silly Silver Age run (for the best appreciation of these stories, listen to the delightful podcast “Tom vs. Aquaman”); but it has never felt like required reading. This title, however, I’ll definitely try for a few months to see if it takes. We know from Brightest Day that Reis can draw the crap out of Aquaman, and that alone is a big pull; but if he and Johns can move the king of Atlantis to the A-list, I’ll be very impressed. 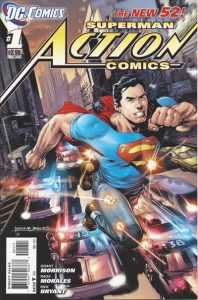 Grant Morrison loves Superman more than you. And me. And probably more than Jerry Seigle and Joe Shuster. This is a man who thinks about Superman, his mythos and character and symbolism, on a daily basis. He is responsible for All-Star Superman, possibly the greatest Superman story ever written. This will be a good book. This might be a great book. It takes place when Clark Kent is still a young man, just learning how to be Superman, not entirely confident in his powers and his quest for justice. I do have a few concerns, though. For example, I can get behind jeans and a Superman t-shirt, but what’s the deal with that tiny cape? It looks really stupid. And tiny. But in a new timeline, with Superman as the first-ever superhero, reading about a youngish Clark Kent will be a great way to explore and become familiar with the world. And watching the Man of Steel leap into new and different adventures (especially at the hands of such a good writer) is reason enough for me to pick this up. 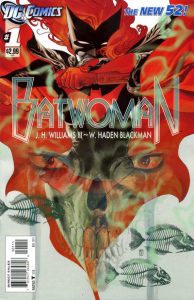 Hey, do you want to read the best-lookin’ book in this whole DC New 52 thing? Then Batwoman’s your jam, my friend. This new Batwoman was introduced back in 2006 creating a truckload of praise for DC as a result of its decision to introduce a high-profile gay character to the roster. Unfortunately, they didn’t do much with her until 2009 when Greg Rucka and JH Williams III made her the focus of a fantastic seven-issue story arc called “Elegy” in Detective Comics . And now she finally has her own book! JH Williams III is back on the art and this time he’ll be co-writing with W. Haden Blackman. We’re just starting to get to know what Batwoman’s deal is, so this book provides a great chance to get in on the ground floor. 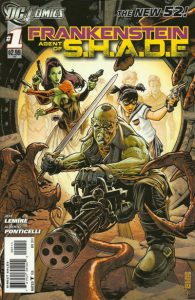 Frankenstein: Agent of S.H.A.D.E. by Jeff Lemire and Alberto Ponticelli

DC’s own version of Frankenstein’s Monster (just called “Frankenstein” here) has been kicking around the DC Universe since he fought Batman in the 40’s. He was recently revamped into an evil-fighting superhero by Grant Morrison in 2005’s Seven Soldiers. Even more recently, Frankenstein’s been kicking around with the “Creature Commandos” (a group of monsters who fight other monsters) and has been recruited by a supernatural government organization called S.H.A.D.E. That’s all great, but Jeff Lemire’s the real reason to check this thing out. He’s been knocking it out of the park with his Vertigo book, Sweet Tooth, and if you’ve read his epic Essex Country Trilogy (published by Top Shelf), then you know why this book is so tempting. 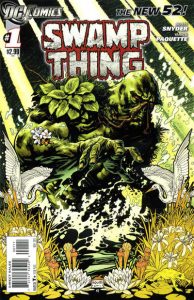 Oh, Swamp Thing … it’s good to see you again. Banished from the core DC Universe to DC’s mature-themed Vertigo line during Alan Moore’s run on the book in the mid-80’s, he really hasn’t done much since. Not to say that they haven’t tried to get Swamp Thing in the forefront; there have been two attempts at bringing him back since the book’s cancellation in 1996, and here they go trying again. But this time’s a bit different because this time Swamp Thing can hang out with Batman. DC has kept a very strict embargo on Vertigo characters interacting with their big heroes, not wanting kids to accidentally stumble upon more mature-themed books. But with this New 52 relaunch, that embargo has lifted somewhat and characters like Swamp Thing, who had previously been off limits, are back in the mix. Look, I’m not saying that he WILL hang out with Batman; just that it’s now a possibility. And isn’t that enough?

Dan Sai and J. Alex Briggs are co-hosts of the podcast There You Are