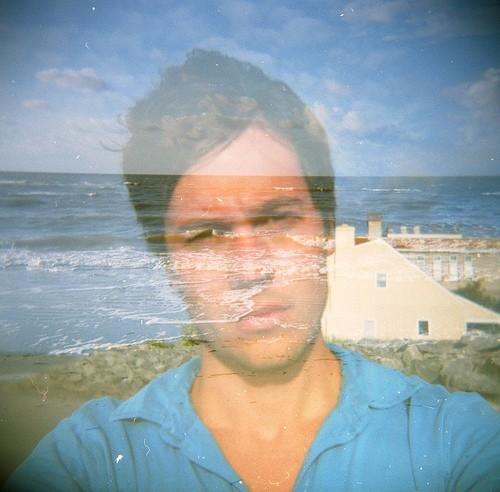 Ernest Greene a.k.a. Washed Out is a 26-year-old musician from Perry, Georgia. Greene has been making music for the last few years, but in recent months people have really begun to take notice of the magic he creates within the confines of his bedroom. His music sounds like a hazy, sun-soaked, 80’s synth-pop dream. The Life Of Leisure e.p. is available now digitally and through Mexican Summer in early October. If you’re looking to stretch out the remaining warm days, grab Life Of Leisure. Greene, as friendly a guy you could ask for, talks about perseverance, confidence, and the moment his parents finally acknowledged that he might be on to something after all.

Chris Bowman: Early in your music-making career (it’s still early!) you experimented with hip hop instrumentals and lo-fi rock. Then you wrote some songs for an “aggressive” type of dance project called Bedroom. That experience changed the direction of your own music. Aside from lo-fi, Washed Out doesn’t sound like any of those genres. How did you land in the 80’s synth-pop field?

Ernest Greene: That’s a good question. I really can’t think of a great answer I guess. Let’s see, a couple of years ago I was really into Caribou. Are you familiar with his stuff?

To read more with Washed Out click Read More

CB: Yeah. He’s from my neck of the woods (Toronto, Canada).

EG: Oh cool, very cool. So you know a lot of his stuff is like 60’s influenced. I was really big into that, and for the longest time I was kind of emulating what he was doing. I ended up getting super frustrated ‘cause he’s such a genius, it’s just so technically awesome. There was actually a time when I gave up music. I was just like, “Screw this, I’ll never be able to do the kind of stuff this guy is doing.” Then over the last couple of years I’ve just felt that 60’s sound, or a lot of it. I guess over the past six months or so, I’ve been listening to more 80’s stuff in general. There are a couple of sites on line that are mainly vinyl collector boutique sites, just really obscure stuff. I kind of mine through that a lot and pick out stuff and make mix tapes. At the same time, I’m really naive. I wouldn’t say that I’m really familiar with a lot of 80’s music. I’ve definitely approached these songs in a naïve way. Does that make sense?

CB: Absolutely. That might be what allows you to have that familiar but fresh sound. You’re not trying too hard.

EG: Totally. I hadn’t thought about this but earlier in the year I was listening to the newest Grouper album, which is an incredible record. There are a couple of really stand out tracks on there that I was just really in to. That, and I had just gotten a new keyboard, really, really simple. So I was kind of inspired by that sound and so I recorded a handful of tracks that were of obvious influence. It was just me at the keyboard and atmospheric vocals. I hadn’t done stuff like that in the past. And I was working -you mentioned that band Bedroom- and that was just straight ahead dance music. I hadn’t really listened to dance music before that. I kind of see those two influences coming together in the Washed Out thing, in a much more structured way.

CB: The self released e.p. is only a few months old and people are going crazy for it. Why do you think the reaction has been so immediate to this project as opposed to your other projects?

EG: I don’t know. That’s another good one. I definitely made an effort to keep things really simple and to have really simple verse/chorus kind of structure. I think that has a lot to do with it. Probably another thing would be that, in general, the songs are very up beat, major key, uplifting feeling maybe. Again, that was kind of a conscious effort. When I started writing at the beginning of the summer, before all the press and everything, it was more making songs for myself first off, and then songs that my friends would enjoy. At that point the weather was getting really nice here in the south. That was a big influence. I was creating songs with a particular time –like, yo know I would just think, “This would be really great to listen to riding in the car with the windows down. I think that’s got a lot to do with it. It’s melodic, it’s upbeat and generally more positive. Some of the other stuff I’ve done is either straight instrumental or way more melancholy feeling.

CB: It’s hard to believe that the, at times, difficult to decipher vocals are a result of lack of confidence in your singing voice. They sound pretty well accomplished to me. Has that lack of confidence dissipated since you’ve been getting all of these positive reactions?

EG: Yeah, definitely. But at the same time I’m thinking a lot more now about the mixes and about the quality of the songs. Where three months ago when maybe ten people were listening to the stuff I didn’t think twice about anything like that. So I feel with more attention comes higher expectations. I’ve definitely made a concentrated effort to always put out the best stuff I have or really take my time to make sure everything sounds right. Most of the songs on Life Of Leisure were recorded in single sessions and in most cases I probably should have gone back and changed a lot of things or redone things ‘cause there are mistakes throughout the whole album. I actually listen to it now and I’m like, “God, if I just would have gone back and changed that it would be ten times better.”

CB: I’m glad you mentioned that because at the end of “Lately” the recording just sort of stops.

EG: (Laughs). Yeah. I don’t know what I was thinking. Actually when Mexican Summer got in touch with me, pretty early on I’d send in tracks that I had finished with the intention that I would change a few things and send in final mixes, (laughs) and I never ended up sending anything back. Definitely should have taken my time a little bit more. But there may be something of value in that, that it’s maybe a little sloppy or things are out of key or whatever.

CB: That’s exactly the kind of thing that an album or two from now people will be saying, “Oh man! He’s cleaned it up too much.”

EG: (Laughs). Yeah, I’m already worried about that. I’m working on a remix right now for , it’s the song “Anna.” It’s a really great song. But generally when I start out working on a track, I really don’t think about, “OK. I want to make it sound all, this or that.” I just start to create. It ended up that the place I’m at with it really doesn’t have that Washed Out sound to it. It’s a lot cleaner. It’s sounds like a lot more of a straight-ahead –it sounds like a song that The Knife would do or something. So I’ve been thinking to myself do I just hold on to this? I keep feeling that with each thing I do that the sound is more and more defined and it’s kind of limiting.

CB: That’s the disadvantage of being “discovered” so early in your career. People assume you already know the direction you’re going, when really, you’re still finding your way.

EG: It’s really challenging. That’s why I feel like with each song that I put out, it becomes harder and harder. I mean, not necessarily. It’s just that I do all different kinds of music and I love playing around with different styles but I feel like I’m kind of being limited with this lo-fi sound kind of stuff. I think I’ll gradually try to step up the fidelity a little bit.

CB: You’re getting press in Rolling Stone, on the Guardian U.K. website, and too many blogs to name. Are you surprised by the response?

EG: Yeah, definitely. From each day to the next I feel like it gets bigger and bigger. Are you familiar with Toro Y Moi? He’s one of my good friends, Chaz (Bundick) and he’s getting a lot of attention as well. I remember talking to him early on and No Pain In Pop which is this blog and label out of London. They were the first people to get in contact with me and were like, “We’re really interested in the songs. We want to put them up.” I just remember that feeling was so great. I thought that would be it. Maybe you know, like, a couple of other smaller blogs that might jump on it. I felt fulfilled, you know, people like my songs. Since then it’s obviously snowballed and I’m kind of going around just absolutely blown away.

CB: I’ve never asked what sort of equipment an artist uses, usually because it goes over my head. But there are people who’ll be interested to know what sort of gear you are working with.

EG: It’s a really simple set up. I use reason, a software program with a sequencer built in with tons of different drum machines and synthesizers. I arrange everything with that. I have another program called Cubase that I use to record my vocals and any live instrumentation. And I have a couple of shitty little keyboards that I’ll occasionally use. That’s about it. I mean, I sample records and stuff off the internet. But that’s really about it.

CB: This was recorded at your parent’s house in Perry, Georgia. Which also happens to be in the heart of peach country. Could this be the birth of a new genre? Peach Grove Dance Music (PGDM)?

EG: (Laughs). That would be pretty cool. People around here generally don’t listen to this type of music and probably don’t even know that it exists, even my parents. I was really excited at first when Pitchfork or whatever put something up. And of course they had never heard of Pitchfork. But when I mentioned to my dad that RollingStone.com put up one of my songs. At that point it started to become real to him. Leading up to that, (laughs), they thought I was just wasting time in my bedroom and not getting a job.