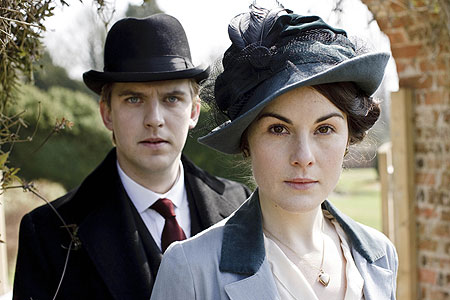 I’ve just finished watch the first season of Downton Abbey. It’s currently running on PBS’ Masterpiece in a slightly abridged form, and ran I guess last year on ITV in the UK.

Frankly, it’s one of the best TV dramas I’ve ever seen. I’d put it on par with Mad Men and within spitting distance of The Wire.

It’s a period drama, and an upstairs/downstairs drama, but it won’t meet your expectations for either of those things. Well, maybe it will in part… if you’re into that kind of thing, you’ll enjoy it. But I’m not, and I was blown away.

Basically the first season is about an Earl and the danger to his estate. Because he lacks a male heir, the estate, including his American wife’s fortune, will pass to a second cousin he’s never met, who doesn’t even want it. Because of the laws of the nobility, that’s how it has to be. This is also a tremendous threat to his three daughters, who are thus forced to marry into the aristocracy or lose their positions in life, and to the entire household.

That hardly begins to describe how elegantly written, acted and directed the series is. It has all the twists and turns of a soapy TV drama (or at least many of them), but I found it absolutely compelling throughout. I never felt forced away from the material, which is usually my reaction to all but the best TV drama.

Do yourself a favor and watch it on PBS. Or buy the DVD, which is only $17 right now on Amazon, and is unabridged.

For those already on board, I’ve started a thread on the forum for discussion. Let’s keep it spoiler free at least until the PBS run ends.