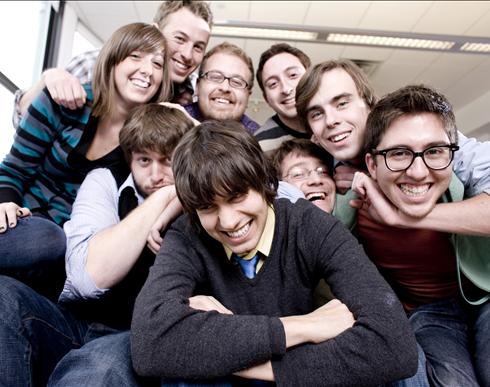 Over the past few years, CollegeHumor.com has gone from a repository of “Cat Gets it in the Jewels” videos to one of the internet’s top sources for original comedy. Now, the College Humor team have created a television series for MTV, which premiers Sunday night at 9:30. MaxFun scribe Casey O’Brien talked with Jeff Rubin and Streeter Seidell, two of the minds behind the show, about making a career in comedy, and making the transition from the desk to the family room.

What do you think sets College Humor apart from the millions of other sites posting funny videos and articles?

Jeff: The biggest difference is our original content, which very few people are doing at the professional level we are and even fewer are doing well. So there’s that.

Streeter: When I started at CH we did not do any original video. A year or so later we started to introduce it slowly so it was kind of like, “if you came to watch wacky cat videos, you can still do that. And, hey, if you have an extra few minutes, maybe you’ll like this sketch we made, too.” We built a following for our original stuff within the audience we already had for our submitted video and I think the two worlds – the viral video world and the original video world – found a nice balance on the site.

Jeff: But even for the less glitzy parts of the site, like the links and the random Internet videos, we try to give it a personality. Instead of just saying, “Here’s a video of a Japanese Goblin Shark,” we’ll say, “Japanese Goblin Shark – the three scariest words known to man.” We’re not just an automated “best of the Internet” thing. Our collection is manually curated by the same people that write and star in the videos and I think that comes through. We’re not just faceless administrators, so hopefully it’s a lot more personal.

Streeter: At the end of the day, I think CollegeHumor is different because it evolved slowly and intelligently from a much simpler humor site. It built an original humor brand on a solid viral video foundation and I don’t think we’d be successful today without either one of those things.

What inspired you guys to get into comedy?

Jeff: I’m tempted to say it’s because people made fun of me in middle school, but the truth is I was into comedy before that. I think when you’re five-years-old you find a movie you love and you just watch it three times a weekend, and for me that movie was Spaceballs. In about fifth grade, I used to write a silly newspaper called The Daily Smell that I gave away to my classmates. I listened to Weird Al albums like they were actual music until approximately high school. Hard to believe I wasn’t more popular!

Streeter: I think I knew I wanted to do comedy after the first time I did standup. I was terrified the night before. I actually had a panic attack and forced my friend to take me to a hospital in the Bronx (not a place you want to go to the hospital with anything less than a gunshot). But the next night I was sitting in Standup NY and heard the MC call my name. I went up and did the garbage five minutes I had written a week before. And I did great. I think the MC had said something like “this is this guy’s first time” before I went up so the audience was a little more forgiving but by the end of my set I was getting genuine laughs. After the show I was sitting in the bar and all these older people were coming up to me and saying how much they enjoyed my set. It was a great feeling and I knew then and there I wanted to do some form of comedy for a career. If I had bombed I don’t think I would have continued with comedy.

What is this College Humor TV show thing that people keep jabbering on about? What is it exactly and how is it going to be different from the website content?

Jeff: “The CollegeHumor Show” is going to be a natural extension of the stuff you see on the website. Imagine a half-hour long Hardly Working with a three-act plot, guest stars, cut-aways to other skits, and higher production values.

Streeter: We wrote the show, play fictionalized versions of ourselves and shot it in our office, much to the annoyance of all the other people who work at CH but aren’t on the show. With the show we had 20-something minutes so we got to play with the story aspect and got to explore the characters a bit more. Hopefully we were able to preserve the tone of the stuff on the site and, if we did that, people who like Hardly Working will probably enjoy the show.

What’s the hardest part about writing comedy and being consistently funny?

Jeff: I’m well aware how spoiled I am, but working with 10 of the funniest people I’ve ever met has in many ways made me jaded. Sometimes it takes something really over the top and bizarre to get a hearty LOL out of me, and it can be tricky to sort out what’s funny to us and what’s going to be funny to the rest of the country.

Streeter: I think the hardest part about being consistently funny is dealing with the fact that you will never be consistently funny. We’re lucky to work at a place that doesn’t put an unreasonable pressure on us to produce at all costs, so if you just don’t have any amazing ideas for a month or two you’re not going to get fired. However, because Ricky understands that creative people cannot be creative at gunpoint, the pressure to be funny comes from within. If he were breathing down my neck to write something funny and I couldn’t do it, I could blame his pressure for stifling my creativity. But when I can’t think of something funny I only have myself to blame, which is a much worse feeling. Dealing with that failure to produce, or to produce quality material, is the hardest part of writing comedy.

You guys have actually made money from being funny. What advice do you have for people that are trying to get into the world of comedy writing?

Jeff: Going into comedy to make money is crazy. If that thought doesn’t discourage you, you will be fine.

Streeter: The way that almost everyone at College Humor wound up there was by writing tirelessly and being generous with their talents. A lot of people I meet will say things like “You’re so lucky you got a job there.” And to a degree they’re right. Certain things just happened to get me there, but I also worked ceaselessly, and for free, for almost two years to get myself into a position to be hired. “You’re so lucky,” yes. But I also spent most of my senior year in college sitting at my desk writing articles instead of going out and partying. Most people there have similar stories, though most started as very talented, dedicated interns. And the common thread we all share was a willingness to put ourselves and our writing out into the world. It’s great to be the funniest guy in the frat but nobody in a position to pay you is going to come knocking on your door if you never put your talents out into the ether. There’s certainly no recipe for success and, yes, there is certainly an element of luck involved, but if you’re talented you cannot harm your chances of doing this professionally by putting yourself and your work out there as much as you can.