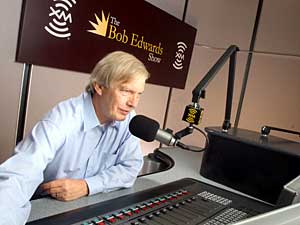 Bob Edwards’ XM radio show is being repackaged and distributed by Public Radio International to public radio stations as “Bob Edwards Weekend.” It’s the first show to move from satellite to terrestrial radio.

I’m happy for him. I get the feeling NPR knows they kind of screwed him when he was dropped from Morning Edition, and they still haven’t been able to replace his warmth and gravitas.

Edwards came on The Sound in August, and was absolutely wonderful. He won my heart by saying that his favorite interview subject of all time was Randy Newman.

I will, however, say that he won’t get far with me complaining about only having eight producers… I don’t have anyone, and I have a full-time job!

Bob Edwards on The Sound of Young America (MP3 Link)