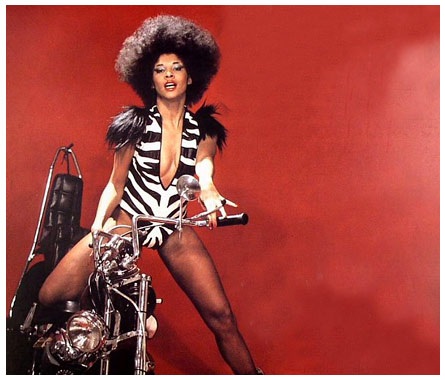 A few years ago, I interviewed Betty Davis. In the 1970s, Davis was the wife of Miles Davis and a talented and accomplished musician in her own right. Her funk records were a bit short on vocal melody, but jam-packed with amazing grooves and raw themes. Her band featured the best funk players in the world. She was also spectacularly good looking and prone to wearing wild stage outfits.

In the late 70s, she disappeared from the music scene, and was very nearly never heard from again. At one point, a fan tracked her down so she could get the tens of thousands of dollars in royalties that she was owed by ASCAP/BMI, but she hadn’t spoken publicly, much less recorded, in 20 years.

Her discography was re-released by Light in the Attic Records in 2007. She did an interview with our friend Oliver Wang for the liner notes, but that was about it. I’m a huge fan, and the people at Light in the Attic love public radio, so after weeks of concerted effort, we got her to agree to an interview with The Sound. The conditions: she wouldn’t go to a studio and I wouldn’t call her directly.

Our interview with Ms. Davis is one of our most popular – I think because Ms. Davis has so many fans desperate for a scrap of information about her life and career.The final interview, I think, came out pretty well. It has lots of her great music livening things up, and lots and lots of interview editing.

Since folks always ask me about this interview, I thought I’d share with you the raw audio of our conversation. Understand that the amount of editing that went into this show is very atypical – all TSOYA interviews don’t sound like this in raw form. Just this one. Undoubtedly the most difficult interview of my life.

This raw interview runs 38 minutes. I won’t even begin to estimate what portion of that is awkward silence.