Our MaxFunCon friends Mike Nelson, Bill Corbett and Kevin Murphy just celebrated the fifth anniversary of their delightful film commentary venture Rifftrax. As part of the festivities, they announced last month that a portion of their video-on-demand collection (five features and ten shorts) is now available on Hulu Plus. More than 18 Rifftrax DVDs are also available on Netflix. And, of course, the group’s own website is a treasure chest of hilarity featuring hundreds of commentaries produced by the prolific team for a wide range of shorts and features.

This tremendous bounty of wit is a constant delight for their loyal fans, but it presents a challenge for those who are just now discovering their work: where should you start? With all of those sparkling gems to choose from, which should you single out for viewing?

That’s where we can help.

Superfan Jay Frosting owns more than 170 Rifftrax commentaries and has dedicated an unnatural portion of his free time to undertaking an in-depth study of the Rifftax catalog. So we asked him to provide us with a quick guide to the top 15 Rifftrax from the first five years. Enjoy!

And don’t forget to watch the Rifftrax team perform live this evening at your local cinema as they poke fun at “Jack the Giant Killer”!

(Available either directly from Rifftrax or from Netflix)

When introducing a friend to Rifftrax, this is my go-to number one example. It is the trippiest anti-drug short film ever, featuring kids with seemingly no short-term memories teaching each other about drugs, how to get them in your system and what they resemble, with quick edits that would make a mid-1980s MTV executive blush. 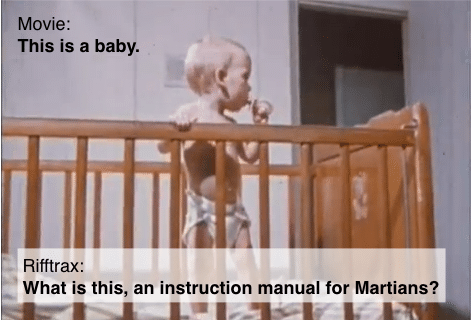 You’ve probably heard friends and critics referring to Plan 9 as the worst movie ever made (it’s not, we’ll get to the real scorcher farther down the list). I know when I watched the original a few decades ago I couldn’t help but make jokes while it was playing, but why not leave that job to the experts? Then your mouth is free for more pleasant activites — like smooching or nibbling on exotic cheeses.

13. Santa and the Ice Cream Bunny

Santa’s sleigh is stuck in the sand. That’s it. That’s the plot of the movie. Well, except that Santa tells the kids a long, extra-sexist version of Thumbelina (moral of the story: don’t be born supernaturally small). By the time the heroic giant rabbit shows up in his or her fire truck to rescue Santa, you’re simultaneously hurting from laughter and screaming at the screen “Why does this exist?!”

12. Night of the Living Dead

Even though it’s the father of almost countless zombie movie children and informs most of our collective understanding of how zombies behave, Night of the Living Dead is mostly just circular arguments that devolve into punching, and lots of haphazard woodworking. 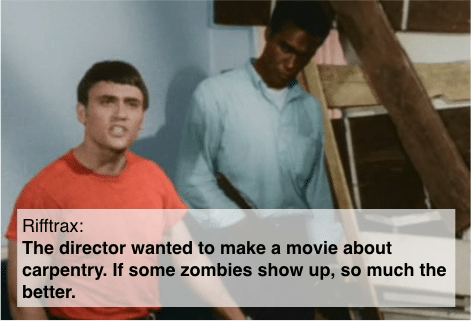 11. At Your Fingertips: Grasses

This is a benign little short describing craft projects involving tall grasses that a sane person would never, ever, do. Listen, I know the economy is bad, but it hasn’t come to making belts out of grass, has it? 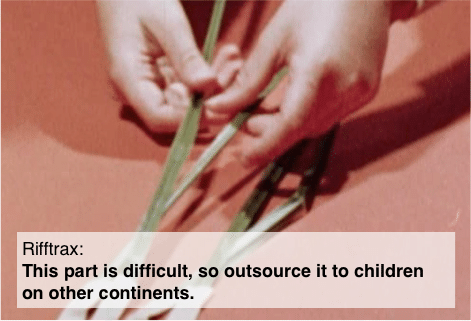 Kids weren’t perfectly behaved in the 1950s. Sometimes a few hairs might be out of place, or their hands would get a little dirty. Shirt buttons weren’t always buttoned up to the collar, and a fit of anti-establishment sentiment might even lead a child to leave a napkin on the school lunch table. Enter Mr. Bungle, a puppet who puts on an ostensibly funny show teaching kids how to be 100% perfect instead of 98%, and then goes on to make some punk music that eventually gets remembered only as the theme song to “Dirty Jobs” on the Discovery Channel.

William has a doll. “But-but-but William is a boy’s name!” Indeed! Witness the drama and intrigue of a boy being persecuted for his progressive open-mindedness and parental instincts.

Actually, the way he caresses that baby sort of borders on monstrous, and then he just leaves the doll in his room when he goes to play football with his tiny macho friends. I’ll bet he abbreviates his name as “Wm.”, too, the little weirdo.

Welcome to the black hole nestled between public domain and copyright. The Star Wars Holiday Special is protected by copyright, but the owners don’t want you to see it, so there’s no DVD for sale. Rifftrax ended up embedding a code in the web page for their commentary track explaining where to find the original video. (Hint: it’s right here.)

As an added bonus, since it was recorded from live TV, Rifftrax went beyond the call of duty and added riffs for the original 1978 commercials, which pegged the needle on my sentimental-ometer.

Whether you think it bites or sparkles, nobody is ambivalent about the Twilight series, but everybody can easily find a copy of the DVD within walking distance, if not in their own home. Along with sequels New Moon and Eclipse, the riffs on Twilight are among the most inspired of the entire oeuvre, probably because not a single character in Forks could tell you what an oeuvre is.

Remember when you finished watching Alfred Hitchcock’s The Birds and you felt you wanted more of the same, but with a much smaller budget, a hero that doesn’t enunciate, and a blonde damsel who would be alarmingly sexy if not for her overpowering stupidity? Well, I’m happy to present you with Birdemic, and don’t worry, when you’re done with that one, they’re making a sequel.

Is it possible to make original jokes about Star Wars in the 21st century? I thought we had run out circa 1992, but to my delight, Rifftrax proved that the well goes so much deeper. 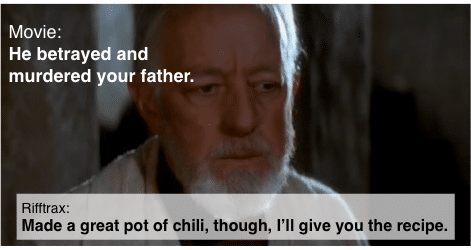 Rifftrax writers really excel at filling in the quiet, slow-moving spaces where audience members are supposed to be feeling an increasing sense of dread, but instead start daydreaming about how they could’ve improved the sandwich they made for lunch. The Grudge is composed primarily of those scenes. To wit:

Maybe the worst movie ever made (it currently boasts a 0% at Rotten Tomatoes with over 8,300 ratings), Troll 2 proves that horror is the hardest genre to do well, but it is oh-so-delicious to ridicule. If you’re not nearly falling off the couch by the time the kids’ camper is filling with witchy sex-popcorn, I’ll worry that your brain may be infected with some unspecified green poison icing. 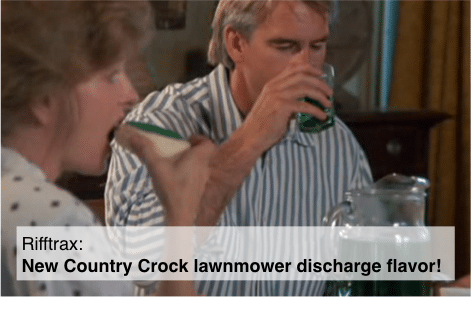 Oh, look: another weirdo named William who doesn’t know how to care for children, except this one has all the money and power in the world. This will end well.

Mike Nelson is joined by Neil Patrick “That Dude is Everywhere These Days” Harris for this bizarre outing down the river of chocolate. At least they say it’s chocolate. Why won’t you let the kids touch the river, huh, Wonka? Because it’s really Ooma Loompa blood?! 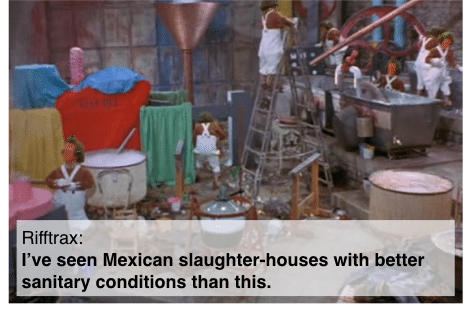 Here it is: probably the worst movie ever made. This movie has twice as much nudity as the screen can handle, and half of the script continuity. Say what you want about Troll 2, at least some things happen in that movie. The star of this one just mopes and mumbles. Occasionally they toss a football around. Thankfully for us, Rifftrax bravely steps in and rearranges the furniture.