This week, Brea and Mallory defend the much maligned term “beach read”, review some weird reading glasses and debate book sharing. Reading Glasses is sponsoring Tonia Thompson’s drive to get copies of The Hate U Give by Angie Thomas into the hands of teens. Link below for details! Use the hashtag #TakeBackBeachRead to participate in online discussion on Twitter and Instagram!

Midnight at the Bright Ideas Bookstore by Matthew Sullivan

Shirley Jackson: A Rather Haunted Life by Ruth Franklin

The Hate U Give by Angie Thomas

The Hike by Drew Magary

What Are You Reading?

This week, Brea is reading Midnight at the Bright Ideas Bookstore by Matthew Sullivan, a thriller about a suicide in a bookstore and the plucky girl trying to solve it. Mallory is very excited about the plucky lady.
Mallory is listening to the audiobook of Shirley Jackson: A Rather Haunted Life by Ruth Franklin. It’s a wicked detailed biography and Mallory is loving it. She’s crazy about Shirley Jackson.

Listener Feedback
Brea and Mallory get feedback on the Reading Glasses Facebook group about reader pet peeves. They include thinking that there’s more book left, but it’s just a reading group guide, when you can’t find a good position to read in, when people ask you to give your opinion on a book you haven’t finished, and dog-earred pages.

Brea and Mallory also get some feedback from episode 3, where they discussed book banning. They interview friend of the show, author Tonia Thompson, who grew up in town in Texas famous for the amount of books it banned in the school library – 32. Some of the banned books, starting with The Joy Luck Club, were replaced by the first 5 books of the bible. It definitely affected her as both a reader and a writer. As a reader, she had to work hard to find interesting books at alternative places like garage sales. As a writer, she had to overcome the idea that her style of horror writing was “wrong” and gave up writing for years. She’s found that curriculums that have banned books are also not diverse and has holes in her reading background, especially for authors of color. Her tips on fighting book bans are to see if you can get banned books in your public library, as opposed to your school library. If your school or library bans books, it might not be offering the diversity of books it should. Look at bestselling lists to see what people are reading and what you’re interested in. The American Library Association and the American Civil Liberties Union both have lists of banned books, places where books are banned and steps to fight back.
Tonia is running a giveaway for The Hate U Give by Angie Thomas, a YA book about the effects of racism and police violence that would have been banned in her high school. She’s working to get it in the hands of teenagers who don’t have access to it. If you want to help by donating, there is a link in the shownotes. Reading Glasses donated copies!

This week, we’re talking about the much maligned beach read. First off.. what is a beach read? The term “beach read” is often used as a derogatory term for a book. If someone says something is a beach read, that usually means it’s too fluffy and doesn’t have a lot of substance. In a non-derogatory way, it can mean a book is a ‘light, easy’ read, not longer than 300ish pages, usually a compelling mystery or a novel centered around a woman.

Brea’s fact about the beach and women: In historian Alain Corbin’s book The Lure of the Sea: The Discovery of the Seaside in the Western World, 1750-1840, he writes about the beach being an aggressive medical treatment to toughen up young girls who appeared too pale. “The ‘bathers’ would plunge female patients into the water just as the wave broke, taking care to hold their heads down so as to increase the impression of suffocation.” That’s not the kind of color you want your kid getting from the beach. Mallory would be the first victim.
Why is the term “beach read” bad? There’s a two fold stigma. One, because many “beach reads” are about women’s stories, and the patriarchy makes us look down on those, they are deemed “lesser”. We’re taught that only ladies want to read stories about ladies, and women’s stories and perspectives aren’t as important, so these books don’t have as much substance. Two, because they’re easy to read, they are looked down on by the snoot police. Because they’re not thick important tomes and they’re read for fun, they aren’t as important.
But we’re gonna take it back! Make beach read a positive term. The patriarchal thing is bullshit and if you’re writing off a book because it’s got romance or a pastel cover or about lady stuff, go jump in a well. Mallory and Brea could do another five episodes about the importance of women’s stories. But besides that, being easy and fun to read and light is NOT A BAD THING. Sometimes you want that! (Like when you’re on a beach…but other times, too) Second off, reading is FUN! Books don’t always have to be super important and dense and intense. Fuck those snoot police! Read your cozy mysteries! Read your Bridget Jones Diary!
Remember that beach read is also marketing term. Just like with lots of publishing stuff, if you see a book on a Beach Reads table at Barnes and Noble, it was probably paid to be put there. Nowadays, lots of things are called beach reads, basically whatever the top sellers are. So the term is grey and ambiguous, anyway.
Don’t forget that until 18th century, the beach was not for relaxing. It was characterized in books as a place where only bad things happened — shipwrecks, sea monsters, pirates, the wrath of gods. These were all things that happened at the beach! Take that relaxing vacation!
Use beach read as a positive term! Redefine it! Any easily read book can be a beach read. Embrace the term! Brea and Mallory want to hear people talk about a great short book like, “damn, that’d be a perfect beach read”, even if it’s about cannibalism. They want to emphasize the fun, easy to read part and erase the derogatory, lady-story and/or substance-less part. They want to erase the stigma because that helps people see lady stories as something that are full of substance and important, and helps reading for pleasure be seen as something great.
Mallory recommends Fever Dream by Samanta Schweblin and Brea recommends Annihilation by Jeff Vandermeer, both weird and kind of scary books that they think are great beach reads. Both hosts recommend The Hike by Drew Magary, a strange sci fi book. Brea found a study that posits that beach or vacation reading is actually the time when you absorb a book the best, because you’re away from distractions. So you should do your most important reading on the beach! Take that, snoot police!

Book Tech
This week, Brea and Mallory review something called Prism Spectacles, this perioscope-esque glasses available on Amazon. When you have them on, you don’t see straight, your vision is directed downwards. They’re for reading on the beach.
Brea didn’t like them because they made her nauseous, but she can see their appeal if you are not able to sit up for a long period of time. Mallory didn’t like them because they didn’t fit over her glasses. Check the Reading Glasses Instagram for pictures of Mallory and Brea wearing them.

Reading Problem
@JamesV_T on Twitter wants to know – Is it ever acceptable to both read the same book at once (alternating custody, a bookmark each) – if not, who gets to read it first?
Mallory – Sure. Depends on your reading speed, though. And schedule! If you both want to read it, but you know your friend/roommate/partner will get through it first, acquiesce. Don’t hog a book if you know the other person will finish it before you. Sharing and communication is key!
Brea – This is a high relationship ask! I mean, I get it. You don’t want to buy it twice. But man — you are testing the boundaries of your relationship, no matter who it is. But I do like the cuteness of “where are you in the book” talk. Overall, I feel like it’s too much of a strain on any friendship or relationship.

Book Connection
This week’s hashtag is #TakeBackTheBeachRead – Tweet or Instagram a beach read you love, or a picture of you reading on the beach! 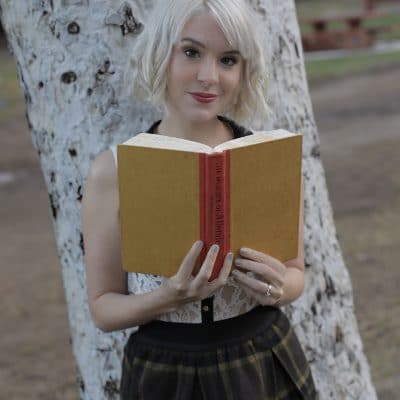 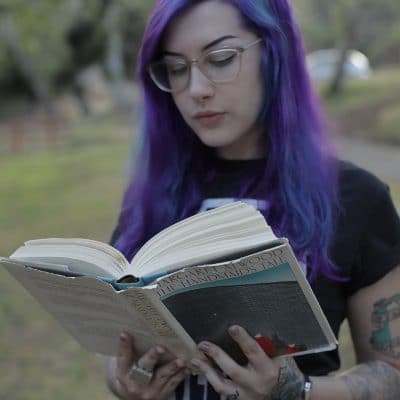 Do you love books? Want to learn how to make the most of your reading life? Join hosts Brea Grant and Mallory O’Meara every week as they discuss tips and tricks for reading better on Reading Glasses, a podcast designed to help you get more out of your literary experiences.

As professional creatives and mega-readers, Mallory and Brea are experts on integrating a love of reading into a busy lifestyle. Listeners will get help for bookish problems, like how to vanquish that To-Be-Read pile and organize those bookshelves. Brea and Mallory also offer advice on reader dilemmas. How do you climb out of a reading slump? How do you support authors while still getting books on the cheap? Where do you hide the bodies of the people who won’t stop talking while you’re trying to read? No matter what you read or how you read it, Reading Glasses will help you do it better.

Episode 112: How to Boil Water and Other Cookbooks and Sam Slaughter!