Samuel L. Jackson once mused what an African American actor would have done with Daniel Kaluuya’s role in Get Out, sparking a heated debate about casting Black British Actors for quintessentially American roles. Although that controversy raged years ago, it continued to simmer. With Cynthia Erivo’s Oscar nod for playing Harriet Tubman in Harriet, and her upcoming portrayal of Aretha Franklin in Genius, this debate has erupted again, giving this conversation more urgency. On this week’s FANTI, Tre’Vell and Jarrett break down why this is such a thorny issue, and also why it matters.

Pass the Popcorn: Love Is Blind 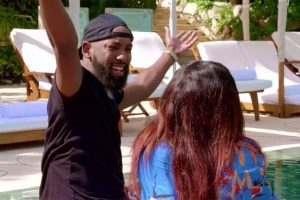 Everyone in Jarrett & Tre’Vell’s timelines wants them to check out the new reality show Love Is Blind on Netflix.